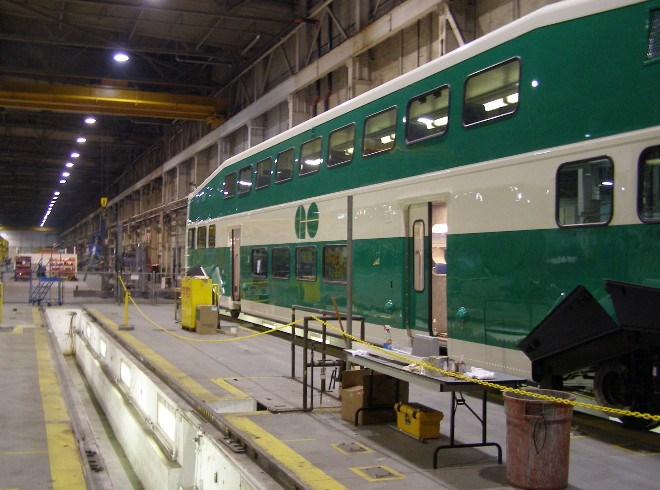 A 2006 file photo of the interior of the Bombardier plant in Thunder Bay.

Bill Mauro was reacting to the news that the Montreal-headquartered aviation and rail manufacturing giant was laying off 550 of its 1,100-person workforce at the plant in the northwestern Ontario city’s south end.

Mauro said keeping the sprawling half-million-square-foot plant alive and thriving has been a priority issue for him since the former Wynne government cabinet minister won the mayor’s chair last fall.

"We’ve done what we could. Obviously, the focus now turns to more of longer-term solution in ensuring the long-time viability and sustainability of the plant.”

The demand for passenger cars certainly seems to be there, Mauro said, based on the Ford government’s inaugural budget, but the government policy needs to ensure that the city’s largest private employer remains sustainable.

Last April, Queen’s Park unveiled a plan for a nearly $30-billion Toronto-area transit expansion plan with four proposed subway and light rail projects. The province has committed $11.2 billion, expecting the City of Toronto and Ottawa to come with the remaining $17 billion on the tab.

Back in 2008, the McGuinty government decreed that public-transit vehicles purchased with provincial funds must include at least 25 per cent Canadian content.

The policy was meant to safeguard manufacturing jobs but wasn’t considered so onerous as to provoke international retaliation for protectionism. That notion has since been lost on other industrialized countries which have more strenuous domestic content requirements.

“We need the Ford government to very clearly articulate a position that they are supportive of that policy and, in fact, they will perhaps even increase the local content requirement,” said Mauro.

“Without that Canadian content policy there’s no guarantee that we’ll even get the work should Bombardier choose to bid on that work.”

Mauro points to Via Rail’s selection last December of Siemens over Bombardier on a $989-million contract for passenger rail cars on the Windsor-Quebec City corridor. The German company intends to manufacture those locomotives and coaches in Sacramento, Calif.

“This proves that without a level playing field on content – like the Americans have at 65 per cent, going on 70 per cent this fall – that if the (government) money’s there and the contracts come out, without that policy, we’re not necessarily in any better position to be successful in the long-term viability of the plant.”

A ‘Buy Ontario’ position on procurement of transit vehicles has historically been a contentious issue among politicians and organized labour in Thunder Bay, where the first TTC cars were made in the early 1960s.

With a clearly stated government need for more mass transit capacity in southern Ontario, Mauro said if the Canadian content piece is secured, when the actual procurement contracts come out, “there’s nothing that stops Bombardier from bidding on them and recalling the workforce, if successful.”

In a statement, Premier Doug Ford, after speaking with Bombardier management and Unifor national president Jerry Dias, said Bombardier and Thunder Bay have an opportunity to be part of his government’s $28.5-billion rail transit expansion plans.

“I told the team at Bombardier that Ontario has the best workforce in the world, and that the workers at the Thunder Bay plant are ready and willing to continue building. I will work around the clock to protect the plant in Thunder Bay,” Ford said in a statement.

Pasqualino said the Ford government’s proposed transit expansion shows the in-service dates by 2028, at the earliest.

“Even if we start by 2025, what are going to do for the next five years? This plant isn’t going to be here. It will be sold off and be some other manufacturing plant at some point.”

In early June, Energy and Northern Development and Mines Minister Greg Rickford made a joint announcement with Pasqualino that the province has mandated Metrolinx to have 36 more GO Transit coaches to be made in Thunder Bay. The minister intimated that could add a few more months of work, extending into 2020.

But Pasqualino said it doesn’t represent a significant volume of work for any extended period.

After a sluggish start with the transit contracts, Pasqualino said they’ve redoubled their efforts in the last two years to meet delivery deadlines. They now produce a finished light rail vehicle (LRV) for the TTC every three days and a GO bi-level coach every two days.

“We’ve got a very well-oiled machine in this plant right now to deliver the cars quickly,” he said.

The workforce at the Bombardier plant was officially notified by Bombardier executives at a July 10 townhall meeting in the Montreal Street plant. Layoffs begin in November.

Though many at the plant knew cuts were coming, Pasqualino said, they weren’t thrilled about the manner in which they heard the news, beginning with a leak at the federal government level that was picked up the national news media the day before.

Workers had been notified by Bombardier brass in June that layoffs were coming if no new rail contracts were signed, and the announcement could come as early as July.

The layoffs, he believes, will only inhibit Bombardier’s ability to competitively bid on new transit contracts, if the company has no assurances that their most skilled tradespeople will return, if recalled.

“They’re not going to be here. I’m not shy to tell you that. If we don’t have contracts signed in the next few weeks there’s going to be another layoff I would imagine.”

Well before the news broke, Pasqualino said the exodus of experienced and talented employees had begun.

“I’m having some people realizing that the prospects don’t look good here and people are leaving to go to other shops," he said.

Pasqualino wholeheartedly supports an increased Canadian-content policy but said the previous provincial government – of which Mauro was a sitting member – had ample opportunity over the past 15 years to do that.

“That could have been easily done. We’re thankful for the 25 per cent (provincial content rule), but it could be more. It should at least match what’s going on in the U.S.

“I’ve brought it up personally with many levels of government – with Jerry Dias – and we’ll keep on saying that.”

Pasqualino said he only needs to ask the current Thunder Bay plant manager, who worked at Bombardier’s plant in Plattsburg, N.Y., on how beneficial Buy America provisions have been for that operation.

During the Harris government days of the 1990s, Pasqualino said during a slowdown in rail orders from the province, the plant was able to pick up a New Mexico contract that sustained Thunder Bay for a period. But that option no longer exists.

Pasqualino, who, together with Bombardier management, met with Premier Doug Ford on May 13, said with the latest cabinet shuffle and a newly appointed transportation minister in Caroline Mulroney, another conversation is warranted to ensure the government understands the importance of getting another transit contract signed immediately.

He harboured no concerns that Bombardier will transfer to the remaining work to other company shops.

“We’re going to finish the work. We’re the best plant, no doubt about it”