Bad asphalt is paving the way for disaster, says researcher

The use of recycled motor oil in asphalt cement is reducing Ontario roads to rubble, said a forensic researcher at Queen’s University who’s been studying the performance of highway pavement for two decades.
May 7, 2015 2:12 PM By: Ian Ross 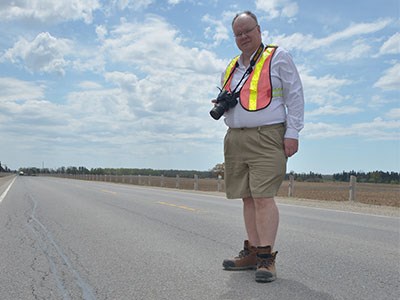 The use of recycled motor oil in asphalt cement is reducing Ontario roads to rubble, said a forensic researcher at Queen’s University who’s been studying the performance of highway pavement for two decades.

“Garbage in, garbage out,” was how Simon Hesp, a Dutch-born polymer chemist and professor, summed up the growing industry practice of mixing cheap oil additives into road pavement, which he considers the root cause of a province-wide problem of premature cracking, potholing and ultimately early road failure.

Hesp, who has been investigating the science of asphalt in his analytical lab in Kingston for 25 years, said that municipalities that select the lowest cost bid on road contracts shouldn’t always expect the best results on a long-term basis, and councils need to get up to speed on what’s going into their asphalt cement.

“Five years is a long time for a municipality. Politicians don’t think that far ahead. But for the road managers, it catches up with them because everything looks like absolute garbage.”

In his Queen’s asphalt lab, zinc and other metals can be detected in pavement samples, indicating the presence of used engine oil.

“We’ve found motor oil in about 50 per cent of asphalt cement in Ontario, and that is the cause of massive amounts of failure. It probably takes off five to 10 years of a lifecycle of road.”

He indicates Ontario suppliers add 10 to 20 per cent waste engine oil residue to their asphalt cement.

Hesp delivered a technical talk and video presentation to Timmins City Council in late April on the asphalt studies he’s been jointly conducting with the Ontario Ministry of Transportation since 2003 on Highway 655, running between Timmins and Cochrane.

Typically, road pavement consists of 95 per cent aggregate and five per cent liquid asphalt that serves as a binding agent.

Hesp said in the late 1990s, Ontario’s adoption of the Superpave (Superior Performing Asphalt Pavement) method for highway construction inadvertently resulted in “gel-type” binders being introduced through waxes, acids and recycled engine oil, the latter he calls the “scourge of the industry.”

Hesp contends that using lubricants as a binding agent to an adhesive – like road aggregate – won’t produce roads that last. Once temperatures plunge in winter, the oil separates from the aggregate “like cheese loses water,” micro-cracks appear and eventually potholes, by the spring thaw.

“Many times we’ve investigated pavements that cracked before the (one-year) warranty started. They had not finished work on the job. That’s what really upsets municipalities, when it starts in the first year or before the warranty starts.”

Aggregates aren’t the problem, said Hesp, since Northern Ontario is blessed with “fantastic” material. Road salt only contributes to the pavement failure if a road is extensively cracked in the first place.

Ironically, Hesp said, Alberta asphalt from Cold Lake – a refined crude oil by-product – is some of the best in the world.

“It’s second to the Venezuela crude that I’ve tested. We bring it to Ontario and it is diluted with motor oil residue and produces probably close to the worst quality asphalt imaginable because of the incompatibility of the constituents of the asphalt and the paraffin in the motor oil.”

Other waste material, such as old roofing shingles and recycled pavement, which end up in asphalt only produce the same early cracking results. “It’s like putting an old engine in a new aircraft,” said Hesp. “In a few years, it’s a total disaster.”

Hesp contends that paved roads with good material – without oil additives – should last 25 years with virtually little cracking. Some rehabilitation overlay or crack sealing can extend its life for another 15 years.

It prompted their asphalt supplier, Montreal-based Bitumar, to unsuccessfully sue these agencies to block the ban. But the lawsuit has only fuelled a larger debate surrounding the use of additives in asphalt.

Unfortunately, Hesp said, there are no viable environmentally-friendly binding agents to replace petroleum products. Some experimentation has been done in the U.S. using recycled vegetable oil from fast food restaurants; tall oil, a by-product of the pulp and paper industry; and swine manure. But the results are the same: the liquid separates from the aggregate in low temperatures and “sweats out” by spring.

“It’s asphalt cement or nothing. You can go to concrete, but it’s 10 times more expensive.”

Hesp said the onus is on the asphalt suppliers to produce a top-quality pavement and suggests municipalities place key language in road contracts regarding precise asphalt specifications. He encourages them to collect and store borehole samples of new pavement that can be analyzed later should problems arise.

“If there is something wrong with the asphalt cement then you can take the contractor by the arm and say, fix it.”

Hesp said the City of Kingston has adopted two of his test methods to screen out waste oil in asphalt and insists on disclosure for contract bidders as part of a pre-qualification process.

Other municipalities on board include the Regions of York, Peel, Waterloo and Niagara, have imposed bans on unwanted material additives, and the MTO is implementing three asphalt tests for major highway contracts using his methodology.

Getting more to join is a challenge, he said, because of politics, a highly-effective industry lobby, and the lack of suppliers and competition in certain regions that prevent cities from implementing change.

Doug Duke, executive director of the Ontario Hot Mix Producers Association, stopped short of calling out Hesp’s research, but questioned why he’s sharing his findings with municipalities and not industry, and why he’s blaming pavement problems on one factor.

“It’s unfortunate, and perhaps a disingenuous message, to blame all of the pavement woes on a singular issue. We’re well aware there are some problems with some roads that have been laid in the last few years with premature cracking, but we don’t have nearly enough information to stake a claim that it’s the result of one thing. It’s more likely a myriad of different technical realities as it pertains to other specifications in the asphalt cement and the mix design.”

The use of recycled engine oil bottoms, or Vacuum Tower Asphalt Extenders (VPAE) in industry-speak, has been common practice for decades – “This is not a new thing” – and is based on different binder specifications related to road design requirements, climate, traffic volume and load.

“The pure AC (asphalt cement) that comes from the oil refinery doesn’t always have the characteristics to meet road design specifications,” said Duke. “Modifiers” are required to “soften” the asphalt to allow it to meet those specifications. VPAE oils are one of those modifiers that have found its way into asphalt cement, he said.

Duke takes issue with Hesp’s assertion that a majority of Ontario’s highways are not performing well.

“Anyone who rides on Ontario’s highways knows that’s not true.”

Nevertheless, as pothole season approached in March, the association struck a task force to review pavement quality across Ontario and come up with recommendations for improvement.

Duke said Hesp has been invited to sit on that task force, which includes the association’s own technical staff and asphalt experts from the University of Waterloo, but he has declined.

“He is just one person with a singular perspective pitching an idea that frankly hasn't been vetted through his peers.”