Sault College digs itself a hole

Sault College president Ron Common winced a bit when picking up a shovel-full of dirt for a photo op, still feeling the affects of recent surgery on his heavily bandaged right hand.
0
Nov 10, 2009 9:06 PM By: Ian Ross 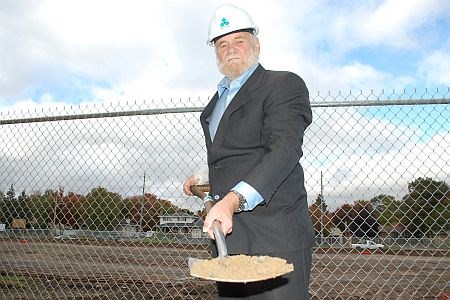 Sault College president Ron Common is a frequent visitor to Queen’s Park with his vision to shepherd the campus through three upcoming phases of construction. (Photo by Ian Ross)

Sault College president Ron Common winced a bit when picking up a shovel-full of dirt for a photo op, still feeling the affects of recent surgery on his heavily bandaged right hand.

But his pain is somewhat eased by the bolt-from-his-chair enthusiasm that takes over when he unfurls the plans showing the massive physical makeover he is shepherding at the Sault Ste. Marie campus. His first floor office provides a front-row seat through a fenced-in compound where he joined Ontario’s college and university czar John Milloy this fall to turn the sod on a new $25 million academic wing now under construction.

“We’re trying to change this college, transform it both physically and through programming," said Common, who called the project the "greatest infusion of capital" in the institution’s 44-year history.

Dubbed Project Twenty-Eleven - the date in March 2011 when all government Knowledge Infrastructure-funded projects must be "substantially completed," the three-story glass and steel academic wing will be the campus postcard for years to come.

It’s a big part of surge of activity coming up in the months and years to follow.

Common is equally jazzed by an upcoming $22-million project which will be the new campus home of the Algoma Public Health unit. The 70,000-square-foot "health hub," which will consolidate five community departments into one central location, will featuring additional classrooms and sharing the college’s library, IT and cafeteria.

A nurse practitioner clinic on site will provide real-world exposure for the college’s nursing and health programs. Bondfield Construction is the contractor while EPOH Inc. is the architect for the energy efficient LEED gold project.

When Common took over as college president two years ago, he quickly sized up that the condition of the 1960s-era architecture wasn’t conducive to modern learning.

Rather than tackle $16 million in deferred maintenance, Common wants to take a wrecking ball to some buildings, including 45-year-old temporary buildings used in the policing and early childhood education programs.

Common has been huddling with the aTRM team to discuss the sustainable design elements which will have a local flavour, such as indigenous plants, wood roofing, steel cladding and copper, the latter having historical significance to First Nation people.

He wants a building with "great curb appeal" that distinguishes it as a Northern Ontario college. "It should speak to you."

While most college presidents would be satisfied with a combined $47 million in new construction, Common insists he’s just getting warmed up. Next up are plans to tear down the gymnasium and erect a new athletic building and "student life centre" worth a combined $8.5 million. Construction dates and funding sources have yet to be determined. Further down the road, he wants a new health building.

Common was heading to Queen’s Park in early October to drum up more money. In his satchel will be impressive enrolment numbers.

Total registration this academic year is up more than 23 per cent of the more than 2,300 student population, including a 35 per cent increase in first-year students, making Sault College the fastest growing college in the province.

"Having explosive growth in enrolment makes it easier to sell government on addressing our capital needs."

He attributes that increase to mature students registering for job retraining, an aggressive marketing and recruitment campaign in southern and eastern Ontario, and expanding satellite campuses from Manitoulin Island to Thunder Bay and as far south as London.

The college is seeing big registration numbers in all their trades programs, their four-year Bachelor of Nursing program (offered through Laurentian University), Aviation, Fish and Wildlife, and Community Service programs such as social service workers.

"Programs that we’ve struggled with for enrolment in the past are full," said Tessa Pino, a Sault College recruiter.

Common is also gushing over their award-winning aircraft structural program which had to be suspended for one year because of low enrolment. The program was reinstated and shifted to London where they deliver the program at Fanshawe College to a full class of 40 laid-off auto workers.