The mining expertise at the heart of Laurentian University may solidify the school's financial fortunes if it moves ahead with the creation of an international faculty of mining, according to president Dominic Giroux.
0
Jul 7, 2009 2:52 PM By: Nick Stewart 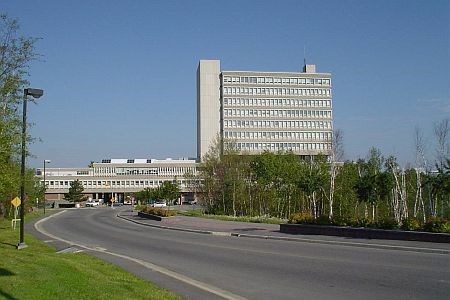 The mining expertise at the heart of Laurentian University may solidify the school's financial fortunes if it moves ahead with the creation of an international faculty of mining, according to president Dominic Giroux.

The proposed idea would offer finishing and professional programs in partnership with other universities in Canada and around the world. It would also specialized in areas other than underground mining and would be available in a variety of languages.

This approach would allow the school to carve out a much stronger niche on the global stage as a place of unique talents and specialties and allow it to become the go-to university in mining and related sciences.

"These are tough times, to be sure, but we feel that we have the means to really weather this particular storm," says Giroux.

"We have a variety of things we're looking at, but I really believe we can emerge from this a stronger and leaner institution."

This potential move is just one of several being considered by the school as a means of shoring up its numbers and financial fortunes in light of ongoing challenges, not the least of which is a projected $7.5 million deficit in 2009.

Having stepped officially into his new role in April as the new budget was being finalized, Giroux has been forced to take a closer look at the school's books, which have suffered as compensation costs and pension contributions have risen faster than tuition fees. What's more, staffing levels have not been reduced following the departure of the double-cohort, which should have meant reducing 45 faculty and 22 non-teaching staff.

Annual financing costs also continue for recent construction projects, including the new school of education and improvements to the Ben Avery athletic facilities.

This leads to the consideration of some program cutbacks and upper-level encouragement of dissolving programs whose usefulness have waned before any ones are created.

"I have to admit that every single department I've met wants to start a new graduate program at Laurentian. The problem is that we can be a university, which attempts to be all things to all people and do all those things well."

One thing Laurentian does well is medical training, since nearly 30 per cent of nurses who graduate in Ontario every year do so through partnerships with the school. Giroux hints at plans to enhance these types of efforts, particularly in the field of rural health care through the Northern Ontario School of Medicine.

This and other projects should help increase enrolment at Laurentian, which continues to annually retain two-thirds of local students looking to pursue post-secondary education.

Despite these numbers, Giroux warns of a "demographic tsunami" as slowing birth rates continue to reduce the number of children in the provincial school system. In order to keep the school strong in the future, diversifying the nature of the student base will be key, he says.

This includes placing a greater focus on First Nations students, who comprise 10 per cent of the Laurentian population.

The school is already moving forward with the construction of a new $3-million learning and sharing centre at the heart of the Sudbury campus, encouraging the gathering of Aboriginal and non-Aboriginal students.

In his prior role as assistant deputy minister of education, Giroux made a personal passion to advance First Nations educational opportunities and he hopes to continue at Laurentian. He says the school must start to look beyond Aboriginal-specific programs towards greater accommodation of Aboriginal interests and learning styles across the educational spectrum. It becomes more important as First Nations' participation in broader programs such as engineering and medicine continues to increase, he says.

Giroux's ideas have already backing from Denis Hubert, president of Collège Boréal, who adds that his new Laurentian counterpart is a solid addition.