Northern College and Hydro One have recharged a successful partnership with a new four-year agreement and a fresh injection of training funding from the provincial utility.
Apr 20, 2012 2:43 PM By: Ian Ross 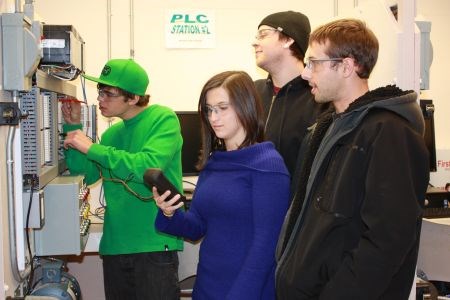 Northern faculty and students have a leading edge on careers with Hydro One through a renewed agreement to extend a successful partnership to train electrical program graduates for careers with the transmission operator.

Northern College and Hydro One have recharged a successful partnership with a new four-year agreement and a fresh injection of training funding from the provincial utility.

Like many industries, Hydro One has a large number of workers facing retirement and Northern is a vital part of a consortium of Ontario colleges working to promote careers for its future workforce.

“Everyone believes that this is making better electrical graduates,” said Tori Hanson, Northern's director of trades and technology.

The college's electrical engineering technician and technology students fall under this partnership.

The Timmins-based institute is one of four colleges in Hydro One's consortium which includes Algonquin (Ottawa), Mohawk (Hamilton) and Georgian (Barrie).

Hydro One is the owner and operator of most of the province's transmission system.

When it started in 2007, the college consortium was only supposed to have a shelf life of four years.

But that first investment of $750,000 has worked so well, and produced such good results, that Hydro One has signed up for another four-year hitch with matching funds.

The renewal of this initiative is well-timed with 30 per cent of Hydro One's workforce eligible to retire in the next five years.

“Hydro One was always clear on the primary goal, to increase the potential workforce and to ensure those people coming in had the right skills,” said Hanson.

In the electrical engineering programs, the number of entries at Northern between 2006 and 2011 has roughly doubled.

In 2007/2008, Northern had 70 electrical engineering technican and technology students enrolled. By the 2010/2011 school year, there were 137 enrolled, aided by the provincial Second Career program for retraining older workers.

Hanson said up to 50 per cent of Northern's graduates are working in the utility sector.

Hydro One has been key in designing the curriculum and has supplied educational materials and access to equipment.

With a slew of current and upcoming industrial work across the North, as well as new high-tech smart meters and smart-grid technologies in place, there needs to be a constant pipeline of new technicians coming into the workforce.

“Hydro One is a very big player in our region and there's a ton of activity going on for hydroelectric (projects) so it was quite a logical choice,” said Hanson.

During the first four-year stretch, a big chunk of Hydro One's funding went into

This next installment is earmarked for recruiting with an emphasis on attracting more women into electrical engineering and bringing more Aboriginal people into the fold.

“That mirrors what Northern is doing where the Aboriginal focus is front and centre for us,” said Hanson, “and as director, I have a desire to see more women coming into our technical programs.”

A new focus this time is integrating elements of applied research into the curriculum, though Hanson couldn't divulge the nature of any projects due to a confidentiality agreement.

“Applied research is good for companies and it's good for our students,” she said. “They start learning the tools of innovative and critical thinking, and productivity improvements.”

“Our students do not get directly hired because they're in this program, what they get is a chance to be at the front of the line in the process,” Hanson said.

Hanson maintains this relationship with Hydro One has bolstered the college's programs and has done nothing to divert graduates away from other industry sectors.

“It hasn't hurt the mining industry to have the changed curriculum, it's helped them given the voltages used in the mines and the increased emphasis on protection and control which is good for them and all sectors.”