The momentum is building to expand Sault Ste. Marie’s science and technology base with the groundbreaking this fall on the $16 million Biosciences and Technology Convergence Centre at Algoma University.
0
Nov 6, 2009 2:53 PM By: Ian Ross 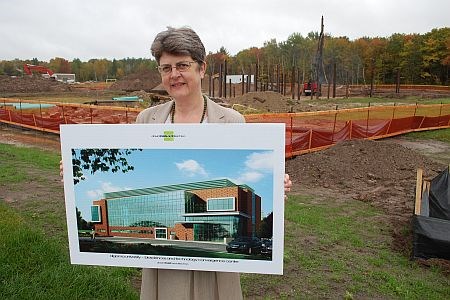 Algoma University president Celia Ross will witness the construction of a second technology building on the Sault campus. (Photo by Ian Ross)

The momentum is building to expand Sault Ste. Marie’s science and technology base with the groundbreaking this fall on the $16 million Biosciences and Technology Convergence Centre at Algoma University.

Once a sleepy science and liberal arts college affiliated with Sudbury’s Laurentian University, the newly independent institution has struck out on its own with advances in community geomatics, health informatics and the computer game technology.

The 41,600-square-foot edifice will be the new home for a slate of business and technology tenants including much-needed room for the Sault Ste. Marie Innovation Centre which moves across campus from the ICT building.

Similar to Sudbury’s NORCAT institute, special emphasis is being placed on combining innovation with commercialization opportunities.

With plenty of teaching space and common areas, it’s being designed as a place for entrepreneurs, technology types, forestry researchers, faculty and students to mix and mingle under one big roof.

The Sault’s David Ellis is the architect. Mike Moore & Sons Construction poured the building’s foundation this fall. A second tender will go out this fall with the structure going up next spring for completion by March 2011.

The four-story building will also house the Innovation Centre’s award-winning Community Geomatics group, along with an expanded business incubator, classrooms and lab space.

Innovation Centre Executive Director Tom Vair said much of what was identified in a community IT strategy three years ago has come to fruition.
"We’re going to be building off each other’s strengths in identifying projects based on skill sets available."

"We’re already talking about combining GIS with invasive species and how to map out (areas of infestation)," said Vair.

"That cross-pollination is already happening but in the centre we’ll have more room and I anticipate we’ll be doing more to grow those initiatives."

University president Celia Ross said the new biosciences centre is about bringing these players together to share ideas. Once the building is up, the network of relationships can be more fruitful.

The federal-provincial government’s Knowledge Infrastructure stimulus program came along at the right time, she said.

"Before we even had a clue of whether we would get any (building) money we decided to use the building idea as a symbol for what they wanted to have happen which was the convergence of activities. But to sell that idea to the politicians, public and the players, it helps if you’ve got a concrete shape."

Four years ago, when the university opened its Information, Communication and Technology Centre (ICT), it was considered to be a catalyst to address the community’s business needs.

Some ventures and academic enterprises in biosciences, IT and computer games technology took off and many cross-over ideas developed through a cluster of partners.

Now it’s bursting at the seams. The new building will offer more office space for IT and science-related companies with meeting rooms, a lecture hall and a common area for entrepreneurs and academic researchers to mingle.

The university also hopes to create a pipeline of graduates into these start-ups.

The anticipation of moving into new digs has spurred a hiring spree with the university boldly predicting 106 knowledge-based jobs created within five years of the centre’s opening.

Autunes is a University of Guelph-trained biologist and soil scientist with expertise in invasive plant ecology. He is finishing his tenure at Evora University in Portugal.

Ross wants locals, students and prospective students to get excited about all the activity happening on the campus. She said it’s a huge selling point for undergraduates as well, particularly for locals who can see the project activity going in.

"I envision when it opens its doors in September (2010) that it will be full," said Ross. "We’re not building excess capacity."

It already has university administration thinking about expansion. Once the centre is open, they will go searching for more funding since the building is designed to have two additional academic and research wings.

The potential of introducing some science-related light manufacturing element onto campus is a real possibility, said Ross. "The ultimate goal of this Convergence Centre is to grow commercializable opportunities."

The centre will have room for the university’s new Invasive Species Research Institute. It will work in concert with the $28-million federal-provincial Invasive Species Centre, which will be headquartered a few minutes drive down Queen Street inside the Great Lakes Forestry Centre.