Burnt pancakes and messy hair: navigating the world of work through a pandemic

Workplace Safety North panellists reflect on the past year with COVID-19
Mar 25, 2021 6:00 PM By: Lindsay Kelly 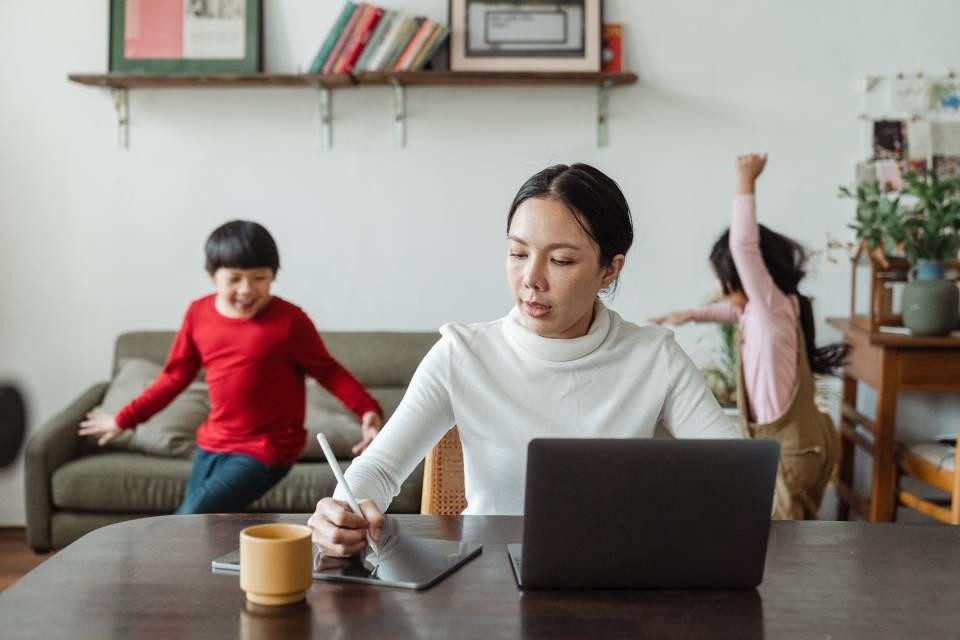 Elisha Malette was in the midst of delivering a virtual training session for clients of Workplace Safety North (WSN) when her professional and personal worlds collided.

Working from home due to the pandemic, the health and safety specialist and a colleague were guiding trainees through the session when suddenly her kids interrupted with a very important request: pancakes.

As she temporarily turned her attention to the kitchen, the kids erupted into a rousing wrestling match nearby, further distracting her. It was then she heard the smoke alarm go off, warning that her kids’ snack was burning to a crisp.

“Don’t waste your maple syrup on pancakes that are burnt, because it’s not going to feed your children,” she joked, while sharing lessons she’s learned while working remotely. “They’re still going to refuse to eat it.”

Malette can laugh about it now. But at the time, she was frustrated and feeling vulnerable about opening up her home life to people she associated with professionally.

“The part I had to work through was, those boundary lines have to go down, and I have to be willing to expose myself as a mom at work, and my kids, on the flip side, had to see me as a mom at work,” she said.

Malette’s experience of trying to adapt to new ways of working has become a familiar one to many over the last year, and it was a key theme explored during a March 24 online panel discussion hosted by Workplace Safety North.

As part of the safety organization’s Feed Your Brain lunchtime series, the one-hour event brought together specialists from the education, mining and occupational safety sectors to reflect on how the arrival of COVID has changed the world of work over the last year.

Want to read more stories about mining in Northern Ontario? Subscribe to our weekly newsletter.

In her role as a safety officer with the Thunder Bay Catholic District School Board, Karen McKissick is accustomed to interacting one on one with her colleagues, and so working from home is “not my favourite,” she said.

Before the pandemic hit, she conceded, she had “never FaceTimed before.”

But with schools shut down as the District of Thunder Bay navigates a full lockdown, videoconferencing has become a key tool in connecting with colleagues. McKissick believes it’s actually given her better insight into who they are as people.

Initially, McKissick and her coworkers appeared as they would in the workplace, attired in workwear, with tidy hair and makeup applied.

As time progressed and more people prioritized comfort, however, the shiny veneer wore off to reveal messy hair and sweatpants, moms and dads parenting their children, and animal lovers attending to their pets, something McKissick called an “honour” to see.

“If anything, my two-dimensional colleagues are now three dimensional, because they are letting me into their personal life, and that usually doesn’t happen in the workplace,” she said.

“So, to me, that was a huge gift, for me to see people being real.”

Don Langlois was in Thompson, MB, when the pandemic was first officially declared, just three and a half months into the job as Vale’s area manager for workplace health and disability management.

Over the previous few weeks, he had participated in discussions about the mining company’s response to the pandemic in its operations around the world. And, following the March 11, 2020 declaration by the World Health Organization, that plan was being put into action.

Despite the uncertainty the declaration created, Langlois was struck by the robust response from Vale’s leadership.

“As many organizations did at the time, there had to be some really strong decisions and strong leadership right from the onset of the pandemic,” Langlois said. “There was nothing more important than people’s health and safety and wellbeing.”

People who could work from home were instructed to do so, and the company created firm protocols about who could be on site.

Travel, both international and domestic, has been tightly restricted, requiring approval from the highest levels of management, Langlois said, and the parameters of what’s considered ‘essential travel’ have shifted dramatically from just a year ago.

“It was leadership by example,” he said. “Our leaders have been, right from the onset, fully committed to this as well, and I think strong leadership is so important to these times.”

Equally important has been the need for clear, transparent communication, McKissick said.

With 1,500 employees at her Thunder Bay school board, it was critical that the leaders immediately set the tone for transmitting relevant information, she added.

The board set up a communications notification email to share the latest notices from reliable sources, like the local health unit or Public Health Ontario, to quash misinformation and ensure employees were getting accurate updates.

“Transparency and communication have been key,” McKissick said. “If an organization has been able to adequately communicate, they’ve navigated quite well through this pandemic.”

All three panellists spoke to the importance of checking in on their colleagues’ mental health, as well as their own.

That might mean scheduling a video call to have an informal chat with a co-worker, taking frequent breaks away from phones and computer screens, or just recognizing personal limitations of time and circumstance.

Malette analogized that living during a pandemic is a lot like being in a boat: everyone is going through the pandemic together, but they’re all on different boats.

“I was grateful to have a bailing bucket in my boat full of holes; I was happy not to be on a cruise ship,” she said. “I think I finished in a well-dented, well-used canoe, sometimes having to paddle like heck to move that inch, and then other times having that wind at my back to push me along.”

A full recording of the webinar is available to view here.