Advancing the cause of diversity 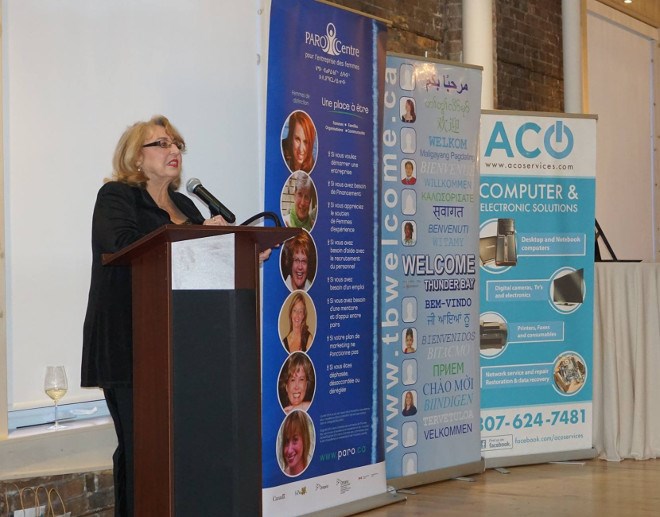 The PARO Centre for Women’s Enterprise and its executive director, Rosalind Lockyer, are championing the cause of gender equity in public office.

When it comes to networking, business and politics go together.

For Rosalind Lockyer, founder and executive director of PARO Centre for Women’s Enterprise, one of Canada’s most successful business support organizations, the best decisions are made when everyone’s views are represented.

Since 1995, her Thunder Bay social enterprise group has been incubating success stories with fledgling female entrepreneurs and their startup ventures to bring about economic security for women.

These days, the not-for-profit organization has a new mission.

They’ve ranged into the field of advancing gender equity causes by finding ways to increase women’s participation in politics or even volunteering at the community board level.

“What we’re trying to do is make systematic change,” said Lockyer.

She was drawn to a Harvard Business Review 2012 survey in which female managers were rated by their bosses and peers as better overall leaders in the core competencies and in results than their male counterparts.

“We need to promote women to be the leaders. We need to break or change some of the systems so that people are seeking out women leaders to be on their boards and as managers of their companies.”

PARO (Latin for “I am ready”) is well-known for its cornerstone program of lending circles of which they’ve created 108 serving women in 89 communities across Northern Ontario, the Ottawa Valley and as far south as Bracebridge.

Similar to those cookie-cutter support networks, among the objectives of their Women’s Leadership Project is to establish the same supports for women running for public office.

“It’s not about any party. It’s increasing the number of women in decision-making positions at all levels,” she said.

To Lockyer, having diverse representation in all races, ethnicities, and age groups in public office means a more equal and more democratic process.

“When you have a truly diverse decision-making body, whether it’s at the municipal, federal, provincial or local board (level), you make different decisions.”

Politics has “overwhelmingly” been a male-dominated field, said Lockyer, pointing to her hometown Thunder Bay City Council where women occupy only three of the 13 seats.

But there’s been some encouraging signs of progress.

Wendy Landry was elected mayor of Shuniah Township in 2014, a rural municipality outside of Thunder Bay, and entrepreneur Shelby Ch’ng won a seat on Thunder Bay City Council the same year.

However, female representation still remains below 30 per cent in most municipalities and school boards.

To advance the cause, PARO received $370,000 in federal funding last summer to work with the local Women in Politics committee, co-chaired by Thunder Bay Counc. Rebecca Johnson.

With the funding, PARO hit the highway to places like Fort Frances and Sioux Lookout to hold community focus groups and consult with people about the best way to increase the number of women on local councils and committees.

From the feedback gathered, they learned the greatest barrier discouraging women from entering politics is fundraising.

Women have an innate ability to raise funds for charitable endeavours, community causes, or political campaigns if they’re raising money for someone else, said Lockyer.

Generally, men are the big financial backers of candidates who are primarily men.

“It’s not an intentional bias but it’s more difficult to get that kind of donation from males that generally back males,” she said.

That’s why Lockyer considers Thunder Bay-Superior North MP Patti Hadju such a success story in the northwest and a “wonderful role model for other women for why they should run.”

Lockyer said PARO’s approach to promoting women’s leadership is to do a project focused on having politics be more inclusive. One way is by appealing to the next generation of voters.

PARO distributed a toolkit to schools across the region to impress upon young people the importance of voting and to encourage young women to participate in the political system.

They’ve staged a Women in Politics event, asking speakers like former Toronto mayor Barbara Hall, female politicians and fundraisers to share their experiences and advice on campaigning and how to ask for money.

“What we’re hoping is that it’ll create a more democratic society,” said Lockyer.