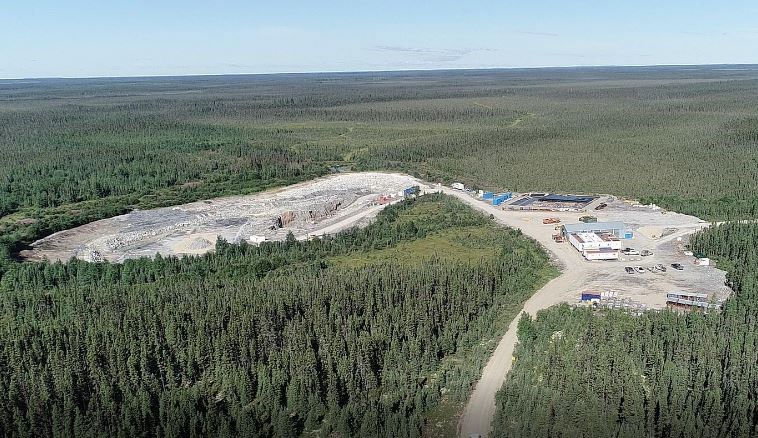 A Sudbury mine developer is putting the pieces in place to reopen a former Quebec gold mine.

Wallbridge Mining, which is proving up its high-grade Fenelon Gold property in northwestern Quebec, posted the results of a recently-completed 35,000-tonne bulk sample.

In a May 15 news release, Wallbridge said the former open pit and underground mine is capable of producing good grades with low-cost bulk mining methods. Stope grades released by the company ranged between 10.94 grams per tonne (g/t) to 38.33 g/t.

The company has applied to the Quebec government to take a second bulk sample and will shortly be filing for full production permits.

The Fenelon project is located 75 kilometres northwest of Matagami, Que.

Wallbridge acquired it in 2016 and has since updated the resource estimate, posted a positive pre-feasibility study, and found more gold offshooting from the main deposit. The company has a major exploration drilling program underway.

"Overall, the bulk sample results met or exceeded our initial projections in terms of grade and gold recovery.”

Their aggressive method of sampling offered a valuable lesson on how best to mine the deposit.

“Selective mining methods allowing narrower zones with less dilution will be tested if a second bulk sample is granted."

Frank Demers, the company’s vice-president of mining and projects, echoed Kord that the Fenelon experience “has given us the opportunity to understand how best to approach developing the property.

"As we continue expanding our exploration efforts and ideally undertake a second bulk sample, we will continue to broaden our understanding of this deposit and maximize overall value.

“Some notable achievements during this campaign include better than planned safety results, zero environmental exceedances, underground development of nearly 2,100 metres and 25,000 metres of diamond drilling.”

On the same day, Wallbridge also announced it closed a $7-million deal with mining financier Eric Sprott in exchange for 29,166,667 common shares.

The private placement increases Sprott’s stake in Wallbridge from 19.9 per cent to 24.9 per cent.

Earlier in the month, William Day Construction and William Day Holdings bought $702, 505 worth of common shares in Wallbridge, representing a 15.16 per cent amount of the company’s shares.

Wallbridge has a stable of nickel, copper and platinum group metals properties in the Sudbury Basin with copper and gold exploration interests in British Columbia and Jamaica.