Unmanned Aerial Services is 'Spot' on when it comes to robotics 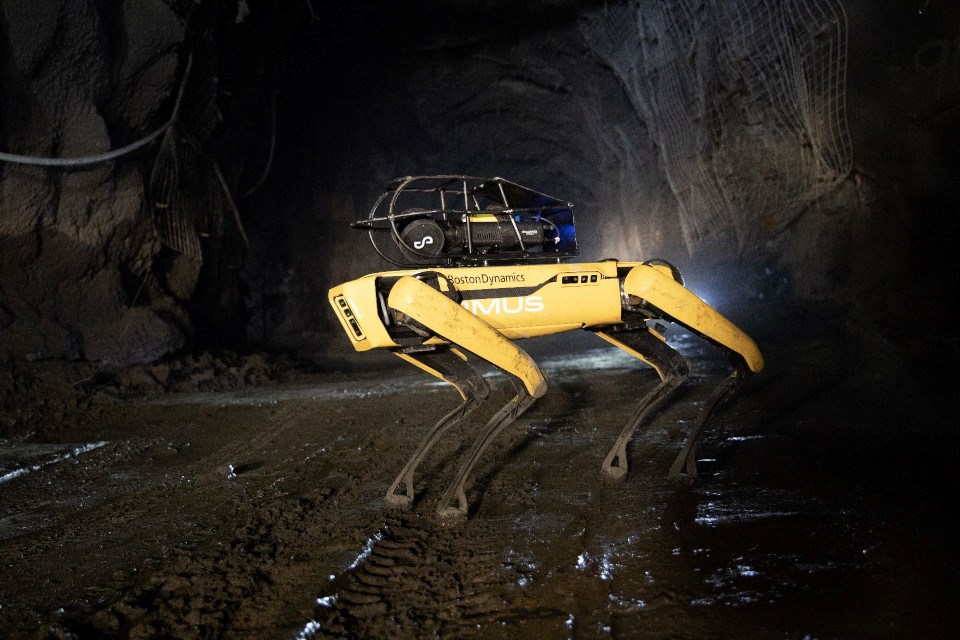 Matt MacKinnon didn't intend to create a viral sensation last fall when he unboxed his semiautonomous Boston Dynamics robot dog and decided to take it for a late evening stroll on a downtown Sudbury street.

The founder and president of Unmanned Aerial Services (UAS) just couldn't resist the the urge to test out the hand-operated controller and put 'Spot' through its paces on a set of stairs near his office.

But within minutes of MacKinnon and Spot hitting the seemingly deserted streets, two individuals in a car pulled up beside him on the sidewalk, asking questions about the quadrupedal robot, and could they grab a photo?

Mindful of Boston Dynamics' instructions to keep Spot out of the spotlight, MacKinnon also realized he was on a public street and couldn't prevent the passersby from taking photos. But they were also shooting phone video, "which makes sense," he said, retrospectively.

His wife warned him to keep this under wraps, knowing the widespread attention it would generate.

"Don't worry," he replied. "'I just took it for a walk around the block. We're in Sudbury. The odds of somebody with any social media influence picking up on this is slim to none.' I completely fluffed it off.

"Well, I wake up in the morning to three emails and a couple texts saying, what the hell is this?"

The grainy video of his late-night excursion with Spot was picked up by Barstool Sports, a popular sports and pop culture digital media outlet. It had gone viral at 10 million views, and counting.

Anticipating a stern rebuke from Boston Dynamics for violating the terms of service, MacKinnon quickly fired off an apologetic email.

Their reply was that it was no big deal. Maybe this unintended exposure and wave of attention could be spun into something awesome.

As days passed, the video gained clickbait steam, generating North America-wide media headlines of a robot dog 'patrolling the streets of Sudbury' and 'freaking out' residents.

"It wasn't patrolling the streets," said MacKinnon. "I was 10 feet behind learning how to operate it. It was my first time."

The video prompted Boston Dynamics founder Marc Raibert to appear on CNN to alleviate any fears that one of his robot dogs had gone off its digital leash and was autonomously roaming the neighbourhoods of a small Canadian city.

"Here's that sensationalism that's obviously hyped up by people's fears and misunderstandings," said MacKinnon. "They want to make sure their product is not displayed in that light."

There have been select corporate snippets of Boston Dynamics' robots climbing stairs, opening doors, pulling trucks and dancing to the oldies.

But the highly advanced robots also evoke both captivating and terrifying images in the public realm as evidenced by future-shock thrillers like a Netflix Black Mirror episode and other robot apocalypse shows involving machines turning against their masters, something the Massachusetts engineering and robotic design company is very conscious of.

MacKinnon can laugh about it now, but it wasn't so funny last September, especially fending off media requests.

Now owned by Hyundai, Boston Dynamics is shifting gears from a leading-edge research shop to the commercial stream. Eager to move product, they still remain cautious in their vetting process of how potential customers will use their robots. Only a few hundred Spots are in circulation.

"They have very clear terms of service. If you plan on using it to menace women and children, they're not going to sell you one."

When UAS and their distributor partner company, Rocky Mountain Unmanned Systems, contacted Boston Dynamics a year and a half ago, their successful pitch was that they wanted to deploy Spot in deep, dark, dangerous places where humans can't, and shouldn't, go.

But the drones have limitations when it comes to the battery life involving flight time, any attached equipment payload, and the constraints of the tight spaces they fly into. Dangling from above in a mine can be a jumble of water and airlines, ventilation ductwork, and wire mesh and bolts holding up the ceiling.

Wheeled and tracked inspection robots can get hung up with large amounts of debris on the floor.

"That's where Spot stood out," said MacKinnon. The robot's four legs are agile enough to scale a muckpile (broken rock heap), a berm, or a choked off brow (a low place in the roof of a mine).

Outfitted with a laser scanning device, the robot can be sent in alone. Using its cameras mounted on the front, side and back to navigate, it can send visuals back to the operator, and digitally map an area for a reliable one-and-half hours before it needs to be recharged.

"The sky was the limit at that point," said MacKinnon. "We can take Spot and a bunch of batteries, throw them a backpack and carry him into accessible areas and then send him out from there. He's our own, essentially, remote dog."

Since acquiring Spot, UAS has put plenty of kilometres on its odometer. The company has offered free-of-charge demonstrations with the robot visiting almost all the major mines and processing plants in the Sudbury Basin. They maintain a busy schedule with upcoming dates at other undisclosed operations in southern Ontario, Québec and Utah.

Attached to this story is Boston Dynamics's recently cut corporate video of Spot's visit to Glencore's Kidd Creek mine near Timmins.

Mines are becoming fully digital, MacKinnon said in his pitch to Boston Dynamics. These smart operations need a steady diet of data, in a real time.

Major orebodies can be quite deep, and the mining companies want to eliminate the amount of ventilation and man-time down there, which are by far their biggest fixed costs.

Spot could conceivably be based in a 'doghouse,' or safety bay, situated in different parts of a mine to perform various duties. Since the entire operation is connected, the robot can be controlled from anywhere in the world.

And for mines that are seismically active, whenever there's a 'bump,' miners must be evacuated until inspections are done of the affected areas.

In the case of long-hole blasting methods, operations can be delayed until the ventilation system clears the blasted space of toxic gases like carbon monoxide, a huge cost since miners can't immediately go back into production areas. Mounted gas monitors can also be damaged by percussive blast waves.

Equipped with a digital sniffer, Spot could be programmed and deployed to perform these remote checks and deliver air readings of a particular area in real time.

"You can open up more of the mine more quickly," said MacKinnon.

"Because of the ability to have multiple units out operating, if you had these in an operation and had a critical event you could, essentially, have the dogs deployed looking for victims."

There are also the dull repetitive tasks that humans take for granted and can be prone to making errors in judgment.

Spot can be programmed to walk a route like a shift boss on patrol, checking on employees and making sure everything's in working order.

For an arranged route through a processing plant, a human operator would initially have to set up the path for Spot to walk using specially designed images called fiducials (similar to QR codes), which act as waypoints on the course that Spot uses to map the world around it. Write in the commands and any tasks involved, like checking a gauge, and the robot is able to execute the walk on its own.

Spot is smart and autonomous enough to recognize a parked piece of equipment in a mine drift and realize there's room to get around to get to its next waypoint.

"The way we're framing it, humans are creatures of habit. When you set up Spot for gas monitoring, it doesn't have those programmed biases that humans do: 'That valve has never leaked before so I'm not going to walk over and check it.' Where Spot is just doing his job. As long as you tell where to go, he's always going to run his path over and over and give you a full and thorough overview," said MacKinnon.

"He doesn't have a bad day, doesn't catch a cold. It just a repeat process where a lot of these jobs can really take advantage of this automated technology."

What MacKinnon found most impressive was that Spot's onboard infrared cameras functioned well in the true zero photon darkness underground, enabling the robot to walk everywhere, independently, without any supplemental lighting.

Most memorable are the human interactions when the robot arrives on site.

"You'll have 50-year-old grown-ass, burly miners saying, that is too cool. We get it to wag its mechanical bum and do a head roll. Never yet has a miner, or anyone that we've shown it to, said 'That's stupid.'"

Many open-minded companies see the real-world applications of where and how this technology fits in.

"A lot of the operations are seeing the value in it. This technology still needs to be operated by humans. It's not taking jobs away; it's making jobs safer, more effective, more efficient."

There are also the hyped-up expectations MacKinnon has to manage on Spot's limitations. Climbing ladders is out as well as muckpiles with a 90-degree base.

"It doesn't have cleats or opposable thumbs. But people in general are really receptive to it."

UAS uses the basic Explorer model of Spot, but they're adding to the fleet in a few weeks with a newer version, the Enterprise model, which comes with its own recharging station and manipulating arm.

With Spot in tow, MacKinnon wants to position UAS as the go-to guys when it comes to mining robotics in Ontario, as both a trainer and a servicer of this technology.

Boston Dynamics wants to expand with a series of global service centres and MacKinnon would like to dovetail on that strategy to provide technicians available to the mine operator on a 24/7 basis.

"We want to provide our clients with the best end solution," said MacKinnon. "Because we operate the equipment as well as train people up and service the equipment, we have a much better understanding of the pain points and what needs to be done."

There are some crossover opportunities for UAS to branch out beyond mining, which MacKinnon was not at liberty to discuss.

Looking back, MacKinnon said that amateur street video did provide some positive outcomes as a business accelerator for UAS.

"I was able to engage with a lot of people who I otherwise would not have been able to deal with inside Boston Dynamics and other industries as kind of an offshoot."

NASA's Jet Propulsion Lab also reached out to pick his brain on operating drones underground. There are similarities in working in the hostile nature of the underground environment with that of outer space.

"I've been very fortunate with everything in this company. It's like stars aligning in the sky of how everything's happened."

The Drift features profiles on the people, companies and institutions making important contributions to Greater Sudbury’s mining sector. From exploration, operation and remediation to research and innovation, this series covers the breadth of mining-related expertise that was born out of one of the world’s richest mining camps and is now exported around the world.