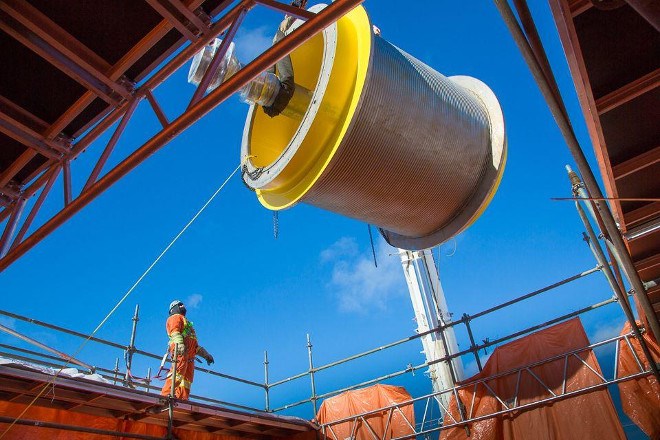 Though coming in slightly over budget, Tahoe Resources expects to start hoisting ore from its deepened Bell Creek Mine shaft, near Timmins, within weeks.

In a statement, company president Jim Voorhees said construction at the Bell Creek shaft project “continues to progress well” as work wraps up on the $80-million project to rehabilitate the shaft and deepen it from 300 metres to 1,080 metres.

Work on the shaft began during in mid-2016 with completion pegged for early in the fourth quarter. It’s expected to double production at Bell Creek to 80,000 ounces a year and extend the mine’s life.

Tahoe’s Timmins operations include the Timmins West Mine and the Bell Creek Mine and Mill complex in Hoyle Township, 20 kilometres northeast of the city.

Tahoe acquired Bell Creek as part of its acquisition of Lake Shore Gold in 2016.

The company reports that all shaft excavation is now complete, the headframe is up, commissioning of the two hoists has begun, and final electrical work in the surface plant is finishing up.

The project will be completed within 10 per cent of the original $80-million estimate, mainly due to hoist electrical installation and other indirect costs through the remainder of this year.

Through the end of September, Tahoe has spent $82.5 million on the project and is spending $5 million more for the remaining costs.

In the larger production picture, Tahoe said the Bell Creek Mill, which processes ore from both mines, achieved a record quarterly throughput of 4,287 tonnes per day (tpd)

Once the shaft is operating, management expects the mill to achieve sustainable throughput exceeding 4,400 tpd.

The company posted a quarterly loss of US $190 million compared to a loss of $8.4 million during the same period last year.

Much of that is attributed to Tahoe’s Escobal silver mine in Guatemala, which has been mothballed since 2017 after its licence to operate was suspended as part of a lengthy conflict with the Xinca people. The company has been ordered to begin a new consultation process.