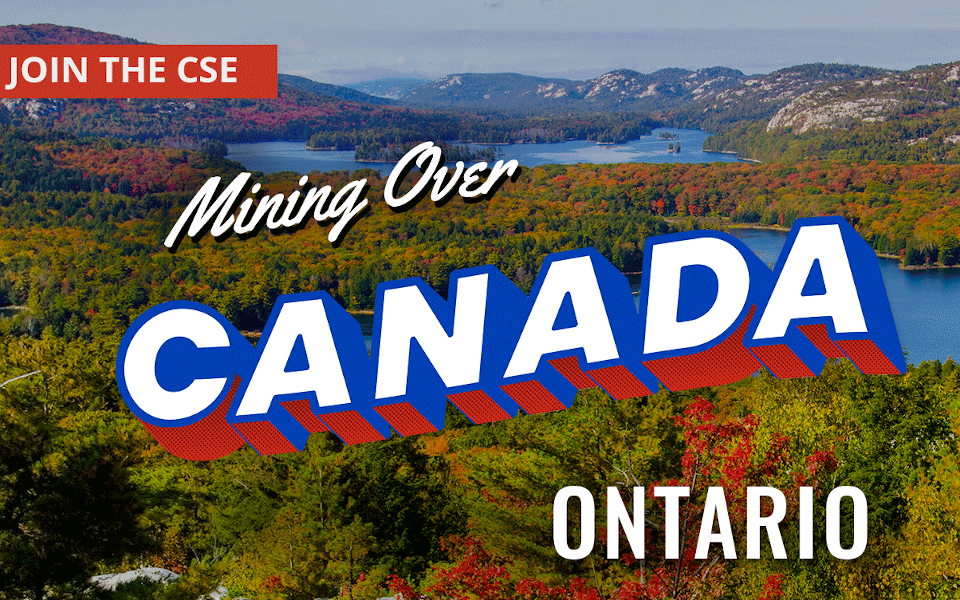 The Canadian Securities Exchange (CSE) is taking to social media to tell the story of Canada's mining industry to a newer and younger investor audience.

The Toronto-based CSE has launched Mining Over Canada, a comprehensive multimedia overview of the Canadian mining industry.

The online presentation, on multiple social media platforms, highlights the industry's importance to the Canadian economy and modern society by showcasing key mining and exploration regions across the nation.

Richard Carleton, the exchange's CEO, who spent part of his early life growing up in the northeastern Ontario mining community of Onaping, now part of the City of Greater Sudbury, believes mining is a cornerstone industry.

"It's critically important that we give this platform to the industry to better communicate to the investing public."

The CSE is home to 179 mining issuers, many of them junior exploration firms, a community within the larger sector that remains "near and dear to our hearts," said Carleton.

The series began in mid-October by profiling Québec and Atlantic Canada, followed by Ontario in late October and continuing into November with the Canadian Shield, Northern Territories and British Columbia.

Viewers will learn about the geography, history, and future of these regions, presented through the eyes of those companies working on the ground, while also addressing issues facing the mineral sector, such as environmental regulation, operational safety, and Indigenous engagement.

Starting such a series, Carleton felt, would offer some real value to their issuers by giving them a stage to tell their fascinating stories.

"I love talking to these guys," said Carleton. "They're so hardworking and optimistic and energetic and positive. It's a great opportunity to build closer relationships with them but also help them tell their stories, because in using social media platforms, generally speaking, the consumers are likely to skew younger than the historical audience for mining exploration companies in Canada."

Unfortunately, the complex and highly technical nature of the industry doesn't always lend itself to being understood by the general public, not to mention would-be investors.

"I think that's an issue not limited to the mining industry," said Carleton.

"We found when working with all of our issuers who are, for the most part, early-stage companies, that we've gone as far as hiring pitch coaches and communications professionals to work with them on the elevator pitch, five-minute pitch and how to best assemble a compelling investor deck."

The challenge of better communicating that value proposition applies to many high-tech fields, he said.

"The technology guys are legendary for having maybe the greatest idea in the history of the world, and being completely in love with it and convinced that they're on the right track, but they have a real challenge in talking to someone on why it's a compelling investment opportunity."

Carleton also finds there is an urban-rural disconnect on the role that mining plays in the Canadian economy and the tangible benefits the mineral sector  particularly the new-age energy and electrification metals – plays in everyday society. That is part of what this series is trying convey, he said.

What's lost on many Torontonians, he said, is how much downtown commercial office space is leased by mining companies, and how many legendary Canadian business leaders, who amassed great fortunes in mining, have shared their wealth through many philanthrophic and cultural endeavours.

With the sector heating up, especially with gold prices, Carleton sees this series as an opportunity to educate and help develop a greater appreciation of the industry to a new investor crowd.

What he finds especially interesting are the efforts by the industry to reduce its environmental impact through technology, best practices and procedures.

That angle, he feels, is part of the key messaging that should garner the attention of a younger, more socially conscious, audience.

"There is a good story to tell and it's absolutely critical that the industry... be a part of the conversation as ESG (environmental, social and corporate governance) standards are beginning to coalesce around the world."