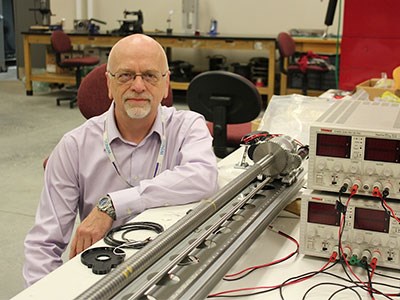 Dale Boucher, CEO of Deltion Innovations of Sudbury, stands behind a sampling drill designed for extreme cold temperatures found in the south pole section of the moon. The drill was tested in liquid nitrogen to ensure it could withstand severe cold temperatures.

From space mining suits to terrestrial robotics, Sudbury’s Deltion Innovations is immersed in groundbreaking research and development of space mining technologies and techniques.

Although the Northern Centre for Advanced Technology (NORCAT) eliminated its Innovation and Prototype Development Department earlier this year, the same work it started in 1995 will continue under the new for-profit corporation, said Deltion CEO Dale Boucher.

“There was no longer any interest by NORCAT to carry on space activity and so we thought there was a good opportunity here for Sudbury. We had developed a good global image and so to continue the work of the department we elected to create this company.”

Among the work it will continue is the RESOLVE project (Regolith and Environment Science and Oxygen and Lunar Volatile Extraction), started in 2005, which will confirm the presence of hydrogen, potentially in the form of water ice on the moon. The intent is to use the drilling technology developed here in the 2018 Resource Prospector mission to the moon.

Boucher is one of eight former NORCAT employees who work under the Deltion umbrella, all of whom are owners of the new company.

The mandate of Deltion is to evolve the manufacture, fabrication and design of space mining equipment and terrestrial mining robotics, said Boucher. In the past the group of experts has worked with NASA and the Canadian Space Agency developing space mining hardware and specific drilling and excavation systems.

Deltion is also looking at spacederived technologies and trying to adapt them to the terrestrial mining environment.

“We do have a contract with NASA to evolve excavation systems with them for space,” Boucher explained.

“We have just completed some contracts with the Canadian Space Agency looking at a possible flight opportunity to the moon to prospect for water ice. We’ve been involved in drilling technology specific to that project. And we have other projects with the mining industry looking at space-derived technology. For this project we’re looking at space suit technology developed by the Kennedy Space Centre and the Canadian Space Agency and how we might apply that to the mining environment for deep mines, for example.”

“We’re trying to get to the point where we can interest government groups or private industry to support it,” said Boucher.

Working on a space project is a massive undertaking and substantial funding is required to make them come to fruition. The drilling and excavation equipment currently being developed for the 2018 Resource Prospector mission to the moon will be used to determine the quality and quantity of the water ice there.

“If that mission does happen and the Canadian government decides to fund it, and if we’re selected to be the provider of the drill for that, that means I would have to more than double my staff here,” said Boucher.

“I would need to partner with companies that have space experience already to help us get through to flight.”

“There are certain capabilities that we’re still learning and there’s some testing we can’t do here in Sudbury.”

For example, to understand how equipment could withstand radiation or extreme vacuum conditions, Deltion will have to look elsewhere for analysis.

“We have set up a network of partners within the space industry across Canada and we’d exercise those partnerships,” he said.

The excavation system was tested in Hawaii in 2008, 2010 and 2012, which is part of the process before flight actually occurs.

The RESOLVE project involves the Sudbury-designed drill along with an analysis system being produced by the Kennedy Space Centre. The entire system will sit on a rover, which Boucher hopes will be manufactured in Canada.

There are many challenges associated with space exploration. For example, in space power is limited. So, many of Deltion’s drills can be powered by 100 watts of power, the same energy used to run a light bulb.

Engage employees toward creating gender-equal culture in mining, urges advocate
Oct 21, 2020 4:51 PM
Comments
We welcome your feedback and encourage you to share your thoughts. We ask that you be respectful of others and their points of view, refrain from personal attacks and stay on topic. To learn about our commenting policies and how we moderate, please read our Community Guidelines.