Smelter won't go where it's not wanted: Noront 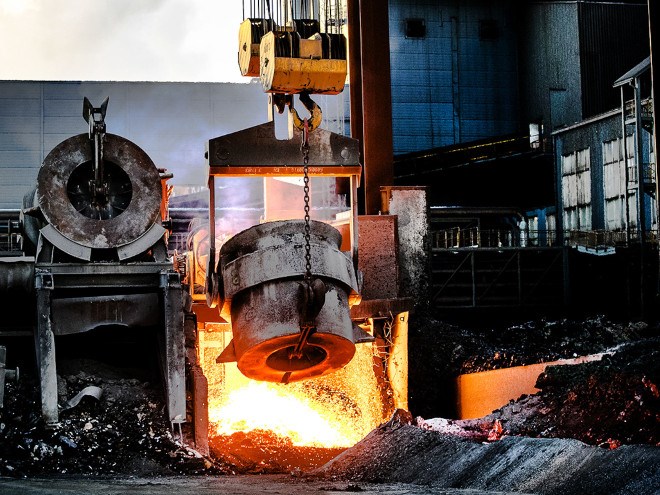 The Outokumpu ferrochrome processing and stainless steel complex in Finland.

Noront Resources won't place a ferrochrome smelter in a community that isn't totally comfortable with having one.

Company president-CEO Alan Coutts further added they won't process Ring of Fire chromite ore in Ontario - or Canada for that matter - unless his company can secure a favourable power rate from Queen's Park.

"The level of comfort we get from the communities and the government will help us to pick the site and to make sure that we've got a viable long-term process.”

Coutts shed some light on Noront's thought process and approach in selecting a suitable host site for a proposed ferrochrome production plant.

Cutting the ribbon on a smelter could be five to 10 years away but there are 350 plant jobs at stake for a chromite processing facility that could potentially expand and create all kinds of industrial service and supply spinoff opportunities.

While each city busily crafts its proposal to Noront, Coutts said the company has been studying the global ferrochrome market, providing processed samples to prospective U.S. stainless steel customers, and having some frank discussions with the province to convince them to enter into negotiations on a long-term power price agreement.

When fully built out, the proposed plant’s four electric arc furnaces will draw 300 megawatts of power.

A conceptual drawing of the layout of the plant in Noront’s investor presentation shows four smokestacks.

Coutts said the operation will be a “significant” greenhouse gas emitter, producing a “colourless heat plume” of carbon dioxide.

Coutts didn’t have emission output figures at hand in a recent telephone interview but said it would amount to about half of one per cent of Ontario’s annual greenhouse gas emissions.

As the largest landholder of chromite property in the Ring of Fire in Ontario’s Far North, building a smelter represents a close to $1-billion project for Noront.

That’s why Coutts said it’s important to know each political party’s stance on cap-and-trade and their carbon tax scheme.

“When you're getting into a dance that's going to last for 50 years or more, you have to understand these long-term ramifications.”

The plant’s first stage would produce between 200,000 and 280,000 tonnes of ferrochrome annually. If market conditions look good, a second stage expansion would produce 560,000 tonnes. Ferrochrome is a major ingredient in the production of stainless steel.

"Ultimately, if we can't find a way to get good power rates and deal effectively with greenhouse gases, this (chromite) ore will get processed overseas,” said Coutts.

"China would be the most obvious. But ultimately it's not something that any of us want to do. We want to process this ore and get that value-added uplift here in Ontario."

The popular perception of smelters evokes images of dirty industry belching pollution like sulphur dioxide into the atmosphere and acid rain killing vegetation and aquatic environments.

Groups like MiningWatch and Public Health Ontario have raised concerns about the toxic impact on human and animal health exposure from exposure to chromium mining and processing. The Hollywood film Erin Brockovich portrayed the health problems associated with the dumping of hexavalent chromium (chromium-6) into the groundwater of a small California town.

All those concerns surfaced recently in Sault Ste. Marie where a group of citizens responded in opposition to the city’s enthusiastic pursuit of the smelter.

Some residents in the steel town of 73,000 view such a facility as a generator of toxic waste and were preparing to organize a campaign against it.

Whichever community Noront chooses next year, Coutts promises the plant will employ “best-in-class technologies” with modern dust controls and best practices drawn from well-established operations like Outokumpu in Finland, a fully-integrated chromite mine, processing and shipping complex that’s been in production for 50 years.

Noront is looking at employing sealed electric arc furnaces which will create an “enclosed reducing environment” that prevents the ore from oxidizing and producing chrome-6.

“Those days are over when you had furnaces with open hearths,” which were oxygen-rich environments that generated massive amounts of particulate, said Coutts.

Instead of casting and crushing the liquid ferrochrome into granular material, and creating more dust, Coutts said their preference is to submerge it in water and produce a pellet-sized “shot.”

The slag byproduct from the furnace will be a “benign” material that he said could be repurposed and sold as roadbed material or additives to cement.

“We’re thinking through the whole process on how to make sure we’re limiting any dust that’s potentially made.”

Noront’s environmental mitigation strategy is outlined in a 10-page document that was distributed to the four bidding cities in October. The document was made available to Northern Ontario Business.

With a stated commitment to follow “best practice in environmental protection,” Noront describes a sprawling complex of furnaces, kilns, a slag pile, materials handling and marshalling yards surrounded by a vegetative buffer zone.

The plant would be outfitted with dust handling and air cleaning systems with on-site water collection and wastewater treatment facilities to keep surface and slag water collected, contained and recycled back into the smelting process.

Incoming Ring of Fire chromite concentrate would arrive in sealed containers and be unloaded indoors to minimize emissions. Stored and finished material would be handled the same way.

Ventilation systems in the buildings would reduce dust and those emissions would be cleaned using baghouse technology.

Furnace off-gases will be cleaned and reused as fuel in the rotary kilns.

Measures would be taken to keep noise levels down and reduce the facility’s light signature.

Based on their modelling on how far dust travels from a point source, Coutts said they’ve advised each community to identify a 1.5 kilometre-by-1.5 kilometre block of ground. The smelter would be centred in the middle.

Coutts said that’s ample size to contain any emissions on the property.

Given that Ontario hasn’t approved a smelter in close to 30 years, since the Kidd Metallurgical Site in Timmins, he fully expects an onerous and rigorous federal and provincial environmental review. The permitting process would be a three to five-year process.

“If a community is hugely opposed to us building a ferrochrome processing plant before we even get into the dialogue…about the environmental process,” said Coutts, “we’re not interested in going down a five-year path.

“For us, it’s just a feeling of whether or not there’s community buy-in.”

Their ideal site is one that’s relatively close to a community to take advantage of existing infrastructure and reuse vacant industrial brownfield sites rather than install new infrastructure at a more remote spot.

“We think it could reduce the overall cost of the smelter by one-third by having it close to existing towns.”

For the City of Greater Sudbury, that rules out the former Moose Mountain mine site, 20 kilometres north of Capreol, where Cliffs Natural Resources once proposed a ferrochrome facility. But the city has other selections in mind.

Making the evaluations and final selection will be a team of technical experts headed by Steve Flewelling, Noront’s senior vice-president of mining and projects, a 30-year mining engineering veteran whose projects include a ferronickel project in New Caledonia for Falconbridge.

Coutts couldn’t put an approximate date on a smelter location announcement, citing the potential competitiveness of the proposals.

But he reiterated their review team is looking for a “compelling case.”

“Be creative. Show us a reason why we should pick your community, whether it’s a technical or social reason. We want the communities to come up with creative bids.”

He finds each city offers some good advantages, with co-generation and novel transportation ideas, but also some drawbacks.

Sault Ste. Marie, for example, has extensive brownfield acreage on its marine port lands, immediately west of Essar Steel Algoma, but not the electrical infrastructure in place for a smelter.

“We’re excited to see what kind of proposals we do get.”

Of course, ground for a smelter won’t be broken until an agreement is signed between the Ontario government and the communities of the Matawa tribal council for an access road into the James Bay region to reach the mineral development properties.

Driving a shared community/industrial road through the bush and swamp, either north from Nakina or east from Pickle Lake, still remains a convoluted work in process. Some of the communities that are being bypassed and not consulted are threatening to block the construction.

Coutts said he’s fully supportive of First Nations being the proponents of the road.

“It’s their traditional land. They should have a say on where these roads get built and how they get built.”