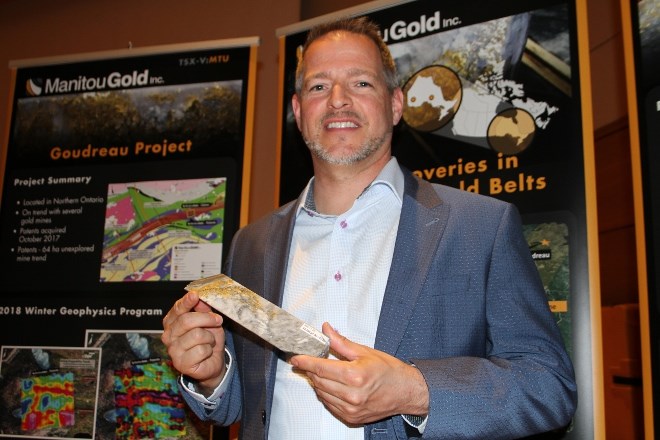 Pat Dubreuil of Manitou Gold has been innovative and creative in his approach to First Nation engagement toward building trust around his gold exploration plays in Northern Ontario (File photo).

Pat Dubreuil was a relative newby to the consultation process.

Barely a year and half into his job as president of Manitou Gold, Dubreuil prepared for his first meeting with a First Nation community by taking a step back to research the culture and traditions of the people he wanted to develop a business relationship with.

“I need to learn who I’m dealing with, and that’s the key,” said Dubreuil.

In explaining his gold exploration project to chief and council, Dubreuil embedded the Seven Grandfather Teachings into his power-point presentation, concluding that talk with a ceremonial exchange of tobacco.

His hosts were highly impressed and complimented him afterwards on his respectful approach.

That first official contact set the relationship off on the right foot.

“If you don’t educate yourself before you meet with these clients, you can get in big trouble just with perceptions,” said Dubreuil.

“Go in well-educated. You’re not just educating them, you’re educating yourself.”

There are many examples in Canada’s natural resource history of relationships gone bad because of misunderstandings in what development can bring, awareness of project timelines and financials, ill-conceived attempts to force agreements, and general mistrust between communities, companies and government.

For Manitou Gold, Dubreuil said it’s important that they differentiate themselves from any other junior mining company by devising their own best practices based on honesty and transparency.

On their advanced gold project near Dryden, they gave a First Nation community a year to review their technical documents prior to taking a bulk sample, rather than the government-mandated 45 days.

In the Wawa-Dubreuilville area, they compensated an Indigenous trapper for any loss of income occurring from the exploration activity on his trap-line.

With a slew of patented land at their disposal, the company elected to keep all the area First Nations well informed of all their exploration activity, even though they’re not required to consult with the group.

“We encourage mining companies not to hide behind the rules,” said Dubreuil, “rather pretend there are no rules, and basically deal out of respect.”

One of Canada’s leaders in striking First Nation-industry partnerships is Wabun Tribal Council, which represents six member communities in the Timmins area.

The organization has 10 impact benefit agreements (IBA) with the operating mines in northeastern Ontario and approximately 100 joint ventures.

“We rely on mining as much as anybody else,” said Jason Batise, Wabun’s executive director, “and we work hard to maintain relationships.”

Wabun has designated staff at the community and tribal council-level to work with junior mining companies operating in their territory, ready to begin the relationship-building process.

The tribal council brings to the table a very structured process by which communities and companies can forge long-lasting partnerships through a series of graduated template agreements.

“It’s not hard,” said Batise. “As long as you are honest and open with our communities we welcome your participation.”

Batise explained the negotiating process works best when both sides are in tandem, each step of the way, and both parties enter the discussions knowing it may take time to reach a fair deal.

Reaching an impact benefit agreement (IBA) with Goldcorp in Timmins took five to six years, he said; the IBA with the company’s Borden Lake mine project near Chapleau took three years.

First Nation consultation in Sudbury has been done in an entirely different way, given the presence of two historical mining companies in the basin.

For more than a century, nickel miner Vale (formerly Inco) was operating “in total ignorance” on the traditional lands of the Atikameksheng Anishnawbek First Nation (Whitefish Lake First Nation), said Angie Robson, the company’s director of corporate affairs and sustainability.

As little as 20 years ago, there wasn’t any awareness or attempt by senior management to engage with area First Nations.

Compared to its newest mine at Voisey’s Bay, Labrador – where 50 per cent of the workforce is Inuit and 80 per cent of their contracts are with First Nation-owned companies – Vale is “playing catchup” in Sudbury on the engagement process, said Robson.

After many breakdowns in discussions over the years, the breakthrough on reaching a "relationship" agreement occurred when leadership on both sides started talking on a personal level about expectations and dispensed with the financials.

Robson said an agreement with Atikameksheng Anishnawbek was signed just before Christmas.

With a framework process for engagement and negotiation based on the principle of mutual respect, an actual agreement came together in a surprisingly short time, she said.

“We’ve come a long way in the last few years but we’ve got lots more work to do.”

In the same boat is Glencore (formerly Falconbridge), which started engaging with the three area First Nation communities around Sudbury, and local Métis, about 12 years ago.

Douglas Conroy, Glencore’s human resources manager, was given the bewildering task of negotiating an agreement with Wahnapitae First Nation.

“At that point we had no clue. We didn’t know what we were doing and we didn’t know how to start, but if you just have respect, if nothing else, you’ll be okay.”

One lesson learned, fairly early on, was that the first contact should be made at a fairly high “chief-to-chief” level.

Going “gung ho” into forcing relationships with First Nations can sometimes backfire and set discussions back years, he said.

“The best advice I can give is: take your time and try and get to know each other.”