Red Lake mine developer is in hiring mode 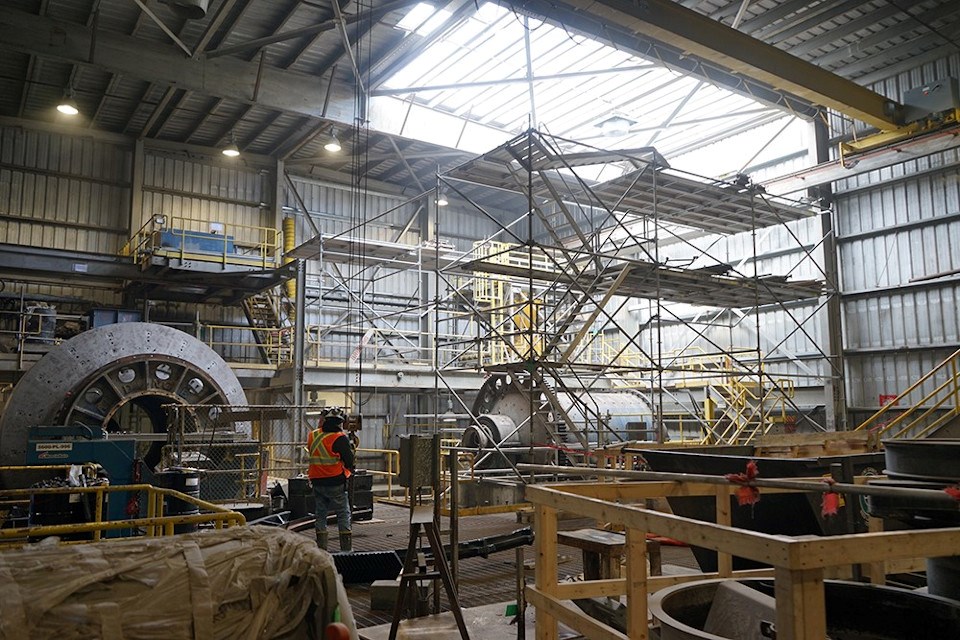 Contractors work inside Pure Gold Mining's processing mill at its Red Lake Mine in May. (Pure Gold Facebook photo).

Construction of Pure Gold's Red Lake Mine is "advancing rapidly" this summer in anticipation of the start of commercial production later this year.

The Vancouver mine developer issued a June 24 update on the progress on the Red Lake mining camp's next gold producer as the development rounds into shape in time for the first gold pour by the fourth quarter.

The company said hiring is underway for the next team of miners for ore development work as well as filling key roles in maintenance.

To date, PureGold has recruited 89 of the 101 employees planned for the end of June.

The total workforce expected to be in place by September, before the start of mill operations, is 189 employees. The company is placing an emphasis on hiring local and First Nation contractors and employees.

More than 80 contractors are at the site, southwest of the town of Red Lake, doing construction below ground and installing equipment and making upgrades at the surface.

“We are now only months away from first gold pour at our new Pure Gold Mine, and our first step to building a long-life growth company in the heart of Red Lake, one of the world’s most prolific gold-producing camps,” said Darin Labrenz, President and CEO in a statement.

Labrenz was pleased that the mine project is speeding toward completion during a rising gold market while they continue exploration on a 47-square-kilometre high-grade gold property - formerly known as the Madsen Mine - that has great potential to add more ounces.

"But we see this as just the beginning of establishing ourselves as Red Lake’s next senior producer. On the cusp of production, we believe we have only scratched the surface and we are already working towards the next phase of our growth with the initiation of an aggressive 18-month exploration program."

The mine's new general manager is Rickardo Welyhorsky, a 27-year professional engineer and mining veteran with stops with Yamana Gold, Detour Gold, Barrick Gold, and AMEC. He was recently at Yamana's Cerro Moro Mine in Argentina where he helped steer its development and commissioning as the director of technical services.

The company said most of the mine management team is in place with appointments of a new milling manager, mining manager, chief engineer, chief geologist, and health and safety superintendent. Discussions are ongoing with candidates for remaining positions.

On the mine development side, as of June 19, a total of 1,285 metres of underground development has been achieved.

The company said contractors are making great process in advancing at a rate of eight metres per day, much better than the five metres listed in the mine plan.

The focus is on the main ramp which will open up more mining areas and drive deeper development more quickly.

Pure Gold said it has commenced initial access development to the first longhole stopes and is now accessing ore on multiple sills. Well in advance of further development, a three-deck alimak has been installed in the shaft to support the mine dewatering process, down to 311 metres.

The company said underground exploration and stope scale drilling is underway, with infill drilling focused in areas targeted for the first two years of production.

The construction and upgrades to the processing plant is going well with old equipment being removed and numerous systems being dismantled to make way for new piping, pumps, motors and other gold room compoments.

A new ball mill is scheduled to arrive in late August. A new administration complex is going up, along with a warehouse, mine dry and water treatment plant building. Road infrastructure has been improved and a mine rock management facility has been completed.

On the health and safety side, Pure Gold since construction started late last year, more than 145,000 hours of work has been completed without a lost time incident. Work plowed on this spring as normal with no reported incidences of COVID-19.

Melkior, Kirkland Lake Gold seal the deal on West Timmins exploration project
Sep 29, 2020 10:30 AM
Comments
We welcome your feedback and encourage you to share your thoughts. We ask that you be respectful of others and their points of view, refrain from personal attacks and stay on topic. To learn about our commenting policies and how we moderate, please read our Community Guidelines.