A completed three-year contract to haul equipment up the James Bay coast to build Ontario’s first diamond mine proved to be a lifeline for a Kapuskasing trucking company.
0
Sep 4, 2008 7:00 PM By: Adelle Larmour 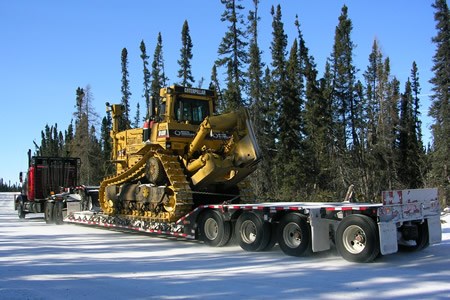 Million dollar pieces of equipment were carefully hauled upon the winter road along the James Bay Coast.

A completed three-year contract to haul equipment up the James Bay coast to build Ontario’s first diamond mine proved to be a lifeline for a Kapuskasing trucking company.

It was a landmark feat for both De Beers Canada’s Victor project and for Larabie Inc., co-owned by brothers Denis and Louis Larabie, in delivering a record number of hauls along the winter road network.

“I don’t think it was ever done,” says Denis, company president, referring to 3,678 loads of freight transported within a fixed winter time frame to meet the mine completion date nine months ahead of schedule. “It was mind boggling and astonishing how everything went so smoothly.”

The timing of the De Beers contract for Larabie Inc. could not have been more perfect.
The 17-year-old trucking outfit had been feeling the crunch in the slumping forest products markets. Denis, a 30-year veteran trucker, jumped at the opportunity to gain a firm procurement foothold with the global diamond mining giant.

“Working with world-class companies like De Beers and AMEC (an engineering procurement consulting firm) was quite an accomplishment for our company,” says Denis.

The contract with De Beers, signed in September 2005, was a chance to acquire a new level of expertise to successfully complete the project.

Larabie Inc. teamed up with joint venture partner CreeWest Limited Partnership, a First Nations business, to carry out the work over the span of the contract, which expired in May.

They worked closely with Moosonee company Ootahpan Co. Ltd., which handled the rail and air freight onto the trucks to be transported to the mine site.

The team hired employees, provided accommodation, established a truck terminal and co-ordinated the movement of million-dollar pieces of equipment and material into truck convoys to haul out of Moosonee along the ice road, a 760- kilometre round trip in the dead of winter.

Working non-stop within a small seasonal window of opportunity and only eight hours of daily sunlight, loads were hauled around the clock over a 42-day period (with 10 days of contingency) between early February and mid-March. It’s considered the optimal time to travel on the ice road.

“We go over 100 small, medium and large rivers,” Denis explains. “We have to wait until there is a minimum of 42 inches of ice to transport a maximum of 25 tonnes.”

Services Company handled the James Bay Winter Road from Moosonee/Moose Factory through to Kashechewan, Fort Albany and then Attawapiskat. From there, KDCI was in charge of the South Winter Road, a 90-kilometre stretch through to the mine site. The weather plays a crucial role in the thickness of the ice and fluctuation of the tides. It determines the size of the loads, how they are co-ordinated, and whether it’s safe to travel. “The conditions of the ice road changes every day,” says Larabie human resource manager Tina Leonard. “You need to be on the ball.”

Health and safety took top priority. Leonard, who recruited 256 drivers from across Canada, helped monitor the drivers on an hourly basis. “We kept tabs with the cook to see if the guys were eating properly and got the proper amount of sleep.” Because hauling was on a 24-hour basis, the kitchen in Moosonee remained open to keep drivers well-nourished.

Accommodations and a terminal were arranged in advance, and a local entrepreneur restored an army bunkhouse to provide shelter for as many as 308 employees.

As many as 68 trucks and 175 trailers were brought up by rail from Cochrane to Moosonee.

Denis said one of the biggest challenges was putting together a team of professional drivers because of the nation-wide shortage of available truckers.

“To get them to work in this environment, you must have a good package to offer them,” Denis says. “If you pay a guy well and feed them, give them a nice comfortable bed and treat them as a team player, that is the recipe for hiring and retaining highly-skilled people.”

But as good fortune would have it, the dip in the forestry industry freed up drivers for their hiring campaign. Surprisingly, 25 per cent of their workforce have been women and 30 per cent were recruited from local communities.