Pure Gold revives a past producer in the Red Lake camp

Mine developer aiming for commercial production at Madsen Mine project in 2020
Apr 25, 2019 1:00 PM By: Lindsay Kelly 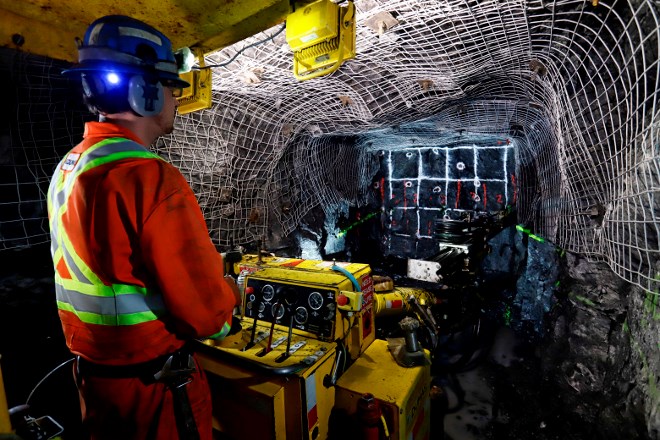 Cashed up for the start of commercial production next year, Pure Gold’s Madsen Mine project has the favourable mineral potential to extend beyond its projected 12-year mine life. (Pure Gold photo)

Six years ago, as board members at Pure Gold Mining were going through a checklist spelling out the ideal attributes of a potential exploration property, they quickly realized the past-producing Red Lake Madsen Mine had it all.

“We wanted to be in a good, stable jurisdiction, we wanted a project that was high-grade, and we wanted access to infrastructure,” said Darin Labrenz, president, CEO and director at Pure Gold. “So, something that we could not only explore, but ultimately build.”

In operation between 1938 and 1974, Madsen is the second largest producer in the Red Lake camp, consecutively producing 2.5 million ounces of gold over 36 years.

But Pure Gold believes the property hasn’t received the exploration attention it deserves, and over the last few years the company has undertaken extensive drilling, making several discoveries that Labrenz said has “really, really opened up the project.”

What sets the property apart is its unique geology, Labrenz said.

“We’re in the right rocks, we’ve got the right structure, but geologically, it was seen as a little bit different than the (Newmont Goldcorp’s) Red Lake Mine,” he said. “It’s a different metamorphic grade, so it’s effectively been cooked up, and some of the obvious characteristics you don’t see at Madsen.”

That includes figures from a preliminary economic assessment (PEA), filed in February, for three satellite areas – Fork, Russet South and Wedge – which added 3.7 years of mine life and $51 million in after-tax net present value to the project.

Pure Gold is proposing an underground operation with a 12-year mine life and processing of 800 tonnes per day.

“I think it really speaks to the upside when you consider that our first drill hole was 14 months ago,” said Labrenz, who became familiar with the Red Lake camp during his 15-year tenure with Placer Dome, where he served as chief geologist at the Campbell Red Lake Mine.

“With additional drilling, we've defined it down to 500 metres, we've put out a resource earlier this year, which is a first-time disclosure resources in that area, and now we've captured it in a preliminary economic assessment.

“So a very rapid transition from a first drill hole to an economic study, and it's right at surface, which is pretty remarkable.”

Pure Gold is also continuing discussions with Indigenous communities in the area, including Wabauskang and Lac Seul First Nations, working toward an agreement and support for the project.

The company is aiming for a 13-month lead-up to commercial production, which is anticipated for 2020.

Once operational, Labrenz anticipates the mine could employ 300.

In the meantime, Pure Gold is bolstering its coffers with $5.1 million in flow-through funding from a syndicate of underwriters, led by Sprott Capital Partners, to continue exploration in its satellite properties.

The company raised an additional $1 million in mid-April after board members and senior management exercised share options that date back to 2014.

Labrenz said this flurry of activity speaks to the company’s confidence in its resource.

“All of it is part of a phased development plan, if you will, where we look to not only extend the mine life, but look for opportunities to expand and potentially grow the production profile.”

With such a long history of mining in the Red Lake area, Labrenz said Pure Gold is excited to be making progress with Madsen, and the company is confident it’s on the right track to find the next northwestern Ontario gold mine.

“What we've done over the last five years really highlights that there still remains a tremendous opportunity for growth in the Red Lake area.

“We very much feel that we are the heart and soul of Red Lake, and we’re very excited to be there and continue to grow organically through our work at Madsen, but also to enable further work in the camp itself, and we're excited about that.”