Northern mining suppliers ready to rock the world at PDAC 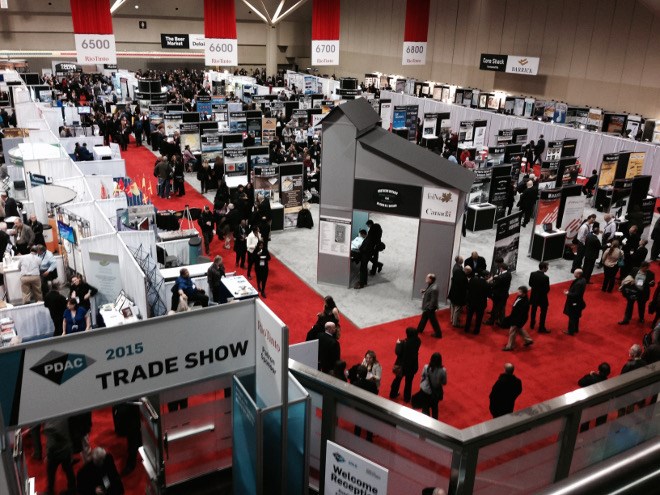 The Northern Ontario Mining Showcase pavilion at the PDAC Toronto mining show in 2015.

The Northern Ontario Mining Showcase has evolved to the point where it’s become a mini-trade show within the international mining industry’s largest convention.

The Temiskaming Shores-led pavilion has 100 Northern Ontario companies and organizations signed up to attend the annual Prospectors and Developers Association of Canada (PDAC) mining convention, March 4-7 at the Metro Toronto Convention Centre in Toronto.

That’s up from the 92 exhibitors who displayed at the 2017 event.

“We’ve been full (with registrants) for months,” said Marla Tremblay, now in her fifth year of organizing the regional pavilion.

The showcase has quickly grown to become the largest of the pavilions at PDAC.

Tremblay estimated more than 10,000 people strolled through their 9,600-square-foot space in the north hall of the convention centre last year.

“It’s pretty cool. It’s an international show and Northern Ontario has the biggest presence,” she said.

The intent of the Northern pavilion is to give small and medium-sized mining suppliers affordable access and international exposure to display their wares and make deals.

For an exhibitors fee of $500, companies and organizations get a 10-by-10 foot fully-wired kiosk. FedNor is paying the bulk of the costs this year for the pavilion’s setup with $535,000.

Tremblay said about 25 per cent of this year’s registrants are exhibiting at PDAC for the first time.

“The goal is really to get these businesses to a point where they see the value and say okay let’s get a big booth outside of the pavilion and to rotate them through. You don’t want the same people. You want to give an opportunity to different people as well.”

The pavilion is not for large mining suppliers of more than 500 employees who usually have the budget to buy a booth on the trade show floor.

“We’re trying to help people who can’t get there,” she said.

Tremblay said the showcase review committee is pretty selective about the quality of the companies they allow in.

“The objective is to have suppliers that really do supply the mining industry,” she said, whether they be exploration, mine construction, rehabilitation, or the operational field.

“We get a lot of applications from people that aren’t a fit.”

Companies or organizations must be headquartered in Northern Ontario and must be involved in some aspect of the industry.

But the door is always open to companies working in other sectors, like forestry, that may have skills transferable to mining.

“It’s a great way to explore that option,” said Tremblay.

Thanks to their network of government agencies, economic development corporations, and chambers of commerce, Tremblay said they’re able to get the message out and there’s no shortage of suggested companies.

As a former City of North Bay economic development officer, Tremblay said she draws the greatest satisfaction from the post-PDAC surveys she conducts where a small company begins exporting for the first time or expands its product line based on a contact made.

“To me, that’s the biggest success because that’s the whole objective, to get people to look at other markets and do it successfully.

“Companies and organizations tell us all the time, we made contacts at that show that we could never have made otherwise.”

Of the exhibitors interviewed following the 2016 showcase, the spinoffs for those companies amounted to $7 million in total sales, 66 jobs created, and 380 jobs retained.

The pavilion has been so successful and gained such brand name recognition that it’s spurred discussion about taking it to mining shows in Montreal and Las Vegas.

“We talk about it all the time,” said Tremblay. “We talk to CIM (Canadian Institute of Mining, Metallurgy and Petroleum) about it. They’re keen to work with us.”

But Tremblay cautions that staging the showcase is a big logistical and administrative undertaking, especially for the Municipality of Temiskaming Shores.

Though there remains a waiting list of 15 to 20 companies, she surmises they’ll likely cap the number of PDAC exhibitors at 100 from now on.

But they’ll change up the event every year to keep it relevant for companies.

Last year, they added a speaker’s series, a permanent stage, and brought in delegates from other countries. Equipment simulators at last year’s event proved to be a hit with delegates.

This year, Sudbury's Northern Centre for Advanced Technology (NORCAT) will be displaying their training simulators and virtual reality technology.

Tremblay said in the beginning when their inaugural event was an afternoon hospitality event at Steam Whistle Brewery across the street from the convention hall, she never gave much thought to how big the pavilion could get.

The committee's guiding principle has always been, “if it makes sense and they are benefits to the companies, let’s do it.”

Tremblay said every decision the organizing committee makes by way of layout, floor plan and program are geared toward how much benefit and visibility it provides for the exhibitors.