Three gold targets have been identified for exploration on the property.
0
Feb 28, 2017 5:00 PM By: Northern Ontario Business Staff 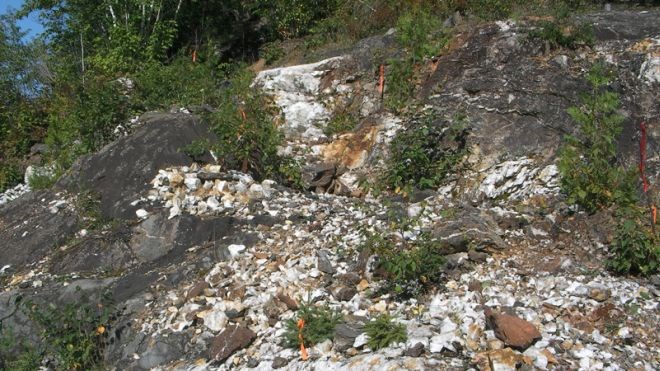 The Soocana Vein at Noble Mineral Exploration’s Wawa-Holdsworth property is one of three gold targets that have been identified for exploration. Noble photo

MacDonald Mines, which is conducting exploration activity on the property as part of a joint venture agreement with Noble, has completed 62 kilometres of line-cutting work in preparation for magnetic and electromagnetic surveys on the property. Results of the work will be used to map prospective drill targets.

Three gold targets have been identified on the property:

The company believes that there is potential to find additional high-grade gold mineralization at the Wawa-Holdsworth Project, which is comprised of 18 contiguous patented mining claims covering approximately 285 hectares.

In addition to the property in Wawa, Noble holds in excess of 70,641 hectares of mineral rights in the Timmins-Cochrane areas of Northern Ontario. The company additionally has uranium projects in Saskatchewan.