It’s a head-to-head competition between two electrical vehicle manufacturers with underground trials being conducted at Goldcorp’s Musselwhite Mine.
Aug 25, 2015 6:27 PM By: Ian Ross 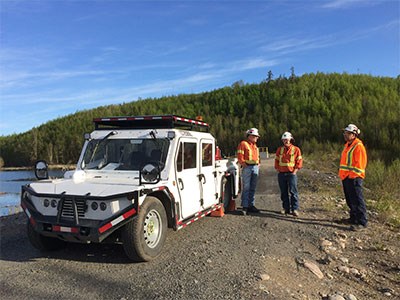 Underground tests are being conducted by Goldcorp staff at the Musselwhite Mine of two electrical utility vehicles manufactured by companies in Sudbury and Saskatoon.

It’s a head-to-head competition between two electrical vehicle manufacturers with underground trials being conducted at Goldcorp’s Musselwhite Mine.

The gold mining company is testing two different models of electric utility and personnel carriers to determine if they can replace their existing fleet of diesel-powered vehicles.

The company has selected two versatile carriers: the MINECAT UT150-eMV made by Industrial Fabricators of Sudbury and the PapaBravo Marmot manufactured by Prairie Machines & Parts of Saskatoon.

The MINECAT arrived earlier this year to begin a three-month trial, followed by the four-seater Papa Bravo.

Musselwhite general manager Bill Gascon has contacted both suppliers and they’ve agreed to extend the trial until the end of December.

“I don’t believe a three-month test is enough. We really want to evaluate them by year’s end.”

A combination of mine ventilation concerns and new provincial regulations coming down on diesel particulate matter has the company looking at all options to create a cleaner and safer work environment.

“We’re constrained by ventilation requirements,” said Gascon. “We’re pretty well maxed out underground but we’re always looking for an opportunity for cleaner air, and with these vehicles there are no emissions.

“We thought it was a good opportunity to test them for the applications in our environment.”

The remote mine, located 192 kilometres north of Pickle Lake, contains 550 employees and more than 100 contractors at any given time.

From top to bottom, it’s a sprawling complex with about 10 kilometres of ramp travel to get down to the 1,095 level.

A fleet of 25 diesel carriers are employed to shuttle personnel to their work sites from the portal on surface.

“We have an extensive network of ramps and levels underground and when we go from surface we have to know they can go all the way underground and by able to come back without a charge if we can,” said Gascon. “We may have to put charging stations underground. We’re still evaluating all that right now.”

Vehicle testing is being done by supervisors and maintenance staff who haul equipment and parts to various sections of the mine.

Eventually, Gascon wants everyone on staff to have some familiarity with the vehicles.

There’s no clear-cut leader at this point, he said, since each vehicle has its own unique and different characteristics.

The heavy-duty MINECAT was purpose-built for the industry, while the lighter PapaBravo utility vehicle is gaining traction within the Saskatchewan potash industry.

Based off the trial results, Gascon said they’ll reach a final decision whether to proceed with electric vehicles and then make a procurement decision.

“I don’t know whether it’s one or the other at this point. Maybe it’s a combination of both that we’ll look at for future use, if we decide to go that route.”

So far, he’s been impressed with the technological advances in battery charge life since the first electric vehicles were introduced years ago. Seldom had electric vehicles been utilized in a hardrock environment, serving only in one-level mines.