A group of Northern Ontario mining-related companies and organizations will be planting a big flag at one of the world’s largest mining shows next week.
Feb 27, 2014 6:49 PM By: Northern Ontario Business Staff 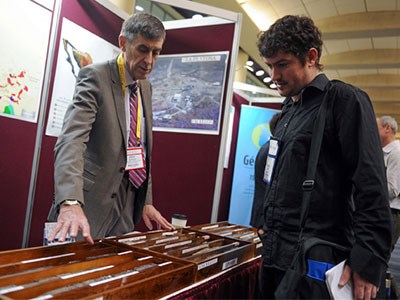 one of the world’s largest mining shows next week.

A group of Northern Ontario mining-related companies and organizations will be planting a big flag at one of the world’s largest mining shows next week.

An event billed as the first annual Northern Ontario Mining Supply Showcase will feature an expanded regional presence at the Prospectors and Developers Association of Canada (PDAC) annual conference in Toronto.

The Northern Ontario organizers have booked a one-day networking event, March 3, at the Steam Whistle Brewery, across the street from the Metro Toronto Convention Centre’s South Building where PDAC is being held.

Forty-seven firms and organizations from the Temiskaming area, Timmins, Sudbury, Thunder Bay and northwestern Ontario are participating in the event on Monday from 1 p.m. to 7 p.m.

James Franks, one of the organizers and the City of Temiskaming Shore’s economic development officer, said the showcase event is intended to drive more business to area companies, institutions and communities.

“If we catch the attention of new mining companies that’s a bonus, but that’s not the target.”

Franks, who has attended the conference for the last three years, said this region is competing for attention and investment against other international mining jurisdictions like Mexico, Peru and Australia. Simply booking a hotel hospitality suite doesn’t cut it anymore.

During PDAC week, “the whole of downtown Toronto is (focused on) this event, doesn’t matter what restaurant or bar you walk into, there’s some company or country booking it,” he said.

“We realized very quickly if we wanted to attract any attention we needed to be larger than we were. And the whole idea is to get people to come over and meet with our businesses. You need to be there and be noticeable.”

This annual sojourn has been an evolutionary process since 2010 when the Township of James and the Elk Lake Community Forest first appeared at PDAC to promote the history of Jack Monroe, a well-known prospector who promoted Elk Lake to the mining history in the early 1900s.

But it’s broadened in scope to enable area businesses and industry to promote their products and services.

However, Franks said for some budget-conscious companies, booking booth space on the trade show floor for the full four days of PDAC can be a tad expensive. And the waiting list for prime spots can be as long as five years.

“Many are small businesses with very few employees and can’t be away for too many days.”

Franks said the space they were given at past shows was a bit off-the-beaten track of the normal flow of convention delegates.

“There was limited success,” said Franks. “After last year’s event, we decided we needed to go bigger and better.”

Luckily, the organizers discovered there was a cancellation at Steam Whistle Brewery during PDAC week. For a reasonable $500, delegates get a six-by-six foot display area for one day.

About 5,000 electronic invitations were sent out for convention delegates to slip over for a beer or two.

“We really trying to create an atmosphere that’s going to encourage networking and interaction and get people to come in, have a beer, walk around and chit-chat,” said event organizer Marla Tremblay.

On the organizing committee are representatives from the City of Temiskaming Shores, Cochrane, Hearst, Township of James/Elk Lake, Town of Kapuskasing and the Northwestern Ontario Community Futures Development Corporation network.

Among the companies and organizations attending the event include an assay lab, millwright services, high tech firms, environmental consultants and engineers, mining equipment manufacturers and fabricators, general contractors and training institutes like the Haileybury School of Mines.

“It really looks like a good geographic cross-section,” said Franks.