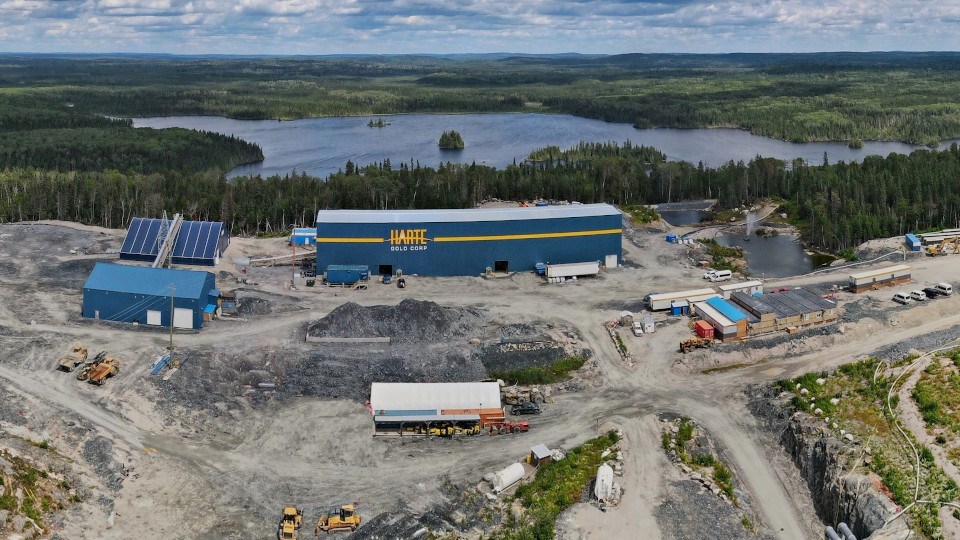 There's been another change in the corner office at Harte Gold.

A little more than a year after Harte Gold's first president Stephen Roman resigned from the White River gold miner, his replacement Sam Coetzer is stepping down from the company, citing personal reasons.

Frazer Bourchier takes the wheel as president, CEO, and director of the board of directors, effective Sept. 21.

Coetzer will remain on the board of directors.

Also on the way out is Martin Raffield as executive vice-president and COO.

According to a Sept. 17 company news release, Raffield is a U.S. resident and his decision to resign was based cross-border travel constraints due to the pandemic.

Raffield will stay on as a consultant until the completion of the feasibility study for the mine's expansion and production ramp-up is due out this fall.

Harte Gold's main asset is the Sugar Zone Mine, 25 kilometres north of White River in northwestern Ontario. It opened for commercial production in the fall of 2018.

Plans are in the works to increase daily production and expand into new gold zones beginning next year.

"I am very pleased to have Frazer Bourchier as my successor and am fully supportive with the transition," said Coetzer in a statement

"I have known Frazer for many years and firmly believe he will continue to grow value at Harte Gold. As the company enters its next phase of growth, I believe the Sugar Zone mine is in very good hands with Mr. Bourchier and the team led on site by Dan Gagnon.”

Coetzer thanked Raffield for his "dedication and commitment" in his duties which became difficult to do as a U.S. resident working in Canada during the pandemic.

Bourchier, an engineer for more than 30 years working in open pit and underground operations, was chief operating office of Detour Gold in 2018 prior to its sale to Kirkland Lake Gold.

Prior to that he was chief operating officer at Nevsun Resources and worked at Silver Wheaton, Intrepid Mines and Placer Dome.

In a statement, Bourchier was "thrilled and energized" to be joining the company and the Sugar Zone's open-ended potential.

Bourchier said his focus is on delivering results through production growth that involves tghe mine's expansion and the ongoing exploration efforts on the property.

"I was drawn to Harte by the operational and exploration potential of the Sugar Zone property in what is a largely underexplored, district-scale land package, in a top mining jurisdiction with significant growth potential.

"It feels like a geological homecoming of sorts, starting my career in the Red Lake greenstone belt and, most recently, at Detour in the Abitibigreenstone belt. I have a deep familiarity with Harte’s operational management team during my mining career.

"Under the guidance of Sam, this team has done a fantastic job in a relatively short period of time to reset the path for a successful operational turnaround and I am confident their successes will continue now with my collaborative leadership.”

The pandemic brought mining, milling and exploration operations to a halt at the end of March. The Sugar Zone Mine, 25 kilometres north of White River.

The phased restart of operations began in mid-July.

The company is planning to significantly boost production next year with better mine development rate and accessing higher grade gold zones on the almost 80,000-hectare property.

A mine expansion feasibility study is underway to move from an 800-tonne-per-day operation to 1,200 tonnes per day.

The study is due out in this year's fourth quarter. With a fresh infusion of capital, the company has also budgeted for a 16,000-metre drilling program to expand Sugar Zone North and South extension.

Near-mine drilling began in August to explore gold mineralization along strike into the Sugar Zone South and Wolf Zone areas.

Engage employees toward creating gender-equal culture in mining, urges advocate
Oct 21, 2020 4:51 PM
Comments
We welcome your feedback and encourage you to share your thoughts. We ask that you be respectful of others and their points of view, refrain from personal attacks and stay on topic. To learn about our commenting policies and how we moderate, please read our Community Guidelines.