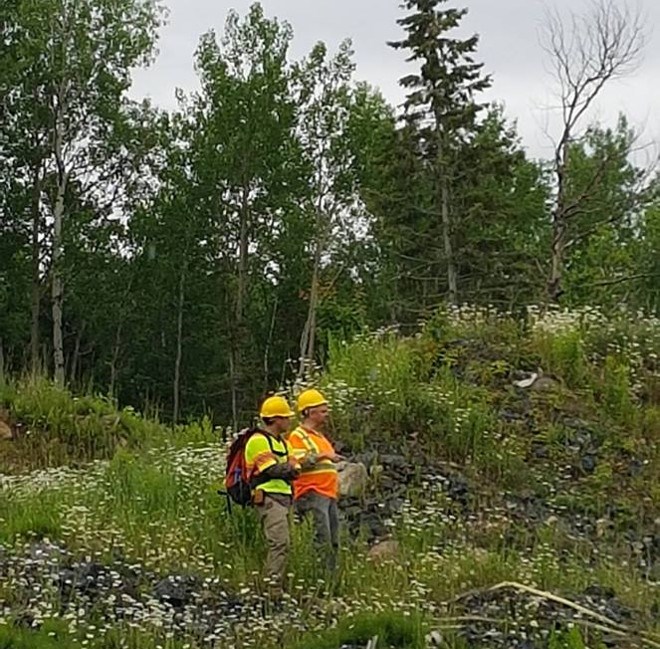 A Laurentian University geology research unit is studying the genesis of the deposits on the historic Cobalt camp in northeastern Ontario.

First Cobalt Mining, the biggest exploration player in the Cobalt camp, is bringing a Laurentian University researcher into the fold to better understand the geology of its properties in northeastern Ontario.

The Toronto company announced it’s embarking on a dedicated research partnership program with the university’s Mineral Exploration Research Centre (MERC) by sponsoring a post-doctoral position to carry out the first detailed study of major structural features in the 110-year-old history of the camp.

“We’re looking at it from a new set of eyes as researchers,” said Ross Sherlock, who oversees MERC’s Metal Earth project. “It’s an unusual geological assemblage.”

MERC is the geoscience arm attached to Laurentian’s Harquail School of Earth Sciences, under the umbrella of the Goodman School of Mines.

The researcher will work alongside the company’s geologists to conduct field mapping and compilation work of the metals in the area.

Whatever data is collected from old mine sites and relatively unexplored areas on First Cobalt’s properties will help augment the geological model the company is assembling.

The partnership program with MERC runs for one year with a one-year renewable option. Sherlock hopes to have a researcher in place and working in the field this spring.

Cobalt is a key ingredient in the booming electric vehicle and lithium battery market.

The global search for deposits of cobalt in safe and socially responsible mining jurisdictions has led many exploration firms back to the historic northeastern Ontario silver mining district to secure a supply of what once a largely discarded by-product metal.

First Cobalt will obviously derive some benefit from MERC’s research but Sherlock maintains they’re not being hired as consultants to guide First Cobalt’s exploration and drilling program.

MERC’s prevailing interest is to understand the area’s metallogeny (the study of an area’s geological history and its mineral deposits) as part of studying the area’s overall geological framework.

Sherlock said their research findings will be shared with the company but it will also be published in a public forum.

“It’s a collaborative project. We want to understand – as scientists – how the cobalt formed and what were the geological processes that formed it. We’re looking at it a lot more holistically, on a big scale.”

Much of what’s known about the camp’s geology was driven by old data and surface waste piles left behind by silver mining companies at the turn of the last century.

Sherlock thinks they can advance the understanding of what’s really there.

“Will we completely rewrite the geology of the camp? That stuff tends to come in incremental gains.”

The traditional school of thought is that cobalt – often regarded by early 1900s miners in the Cobalt camp as a nuisance waste rock – is always found with silver. Find the cobalt and you’ll find the silver veins.

But the genesis of how these deposits were formed is not very well understood nor why cobalt is always associated with silver.

“It’s an unusual style of deposit and I’m most interested in looking at the metallogeny of that area. How do the cobalt, base metals, and silver collectively fit together? What is the zoning? What are the controls on it, particularly what are the basement controls on that mineralogy?”

This partnership is an offshoot of Laurentian’s Metal Earth project, an ongoing $104-million program that employs seismic trucks to map the Earth’s crust by bouncing sonar-like signals off underground features to map them. Testing was done in the Sudbury basin and the Cobalt-Temiskaming area last fall.

MERC approached a number of exploration and mining companies to run transects across their properties, which was mutually beneficially to both parties.

“Because of that we’re exploring different options to where we can continue to work in Cobalt because it’s got some geological interest to us,” said Sherlock.

Within the last year, First Cobalt has become largest landholder in the camp with more than 10,000 hectares amassed through company and property acquisition.

Their land package includes 50 past-producing mines, most of which were small underground silver mines. The company has been touting their properties as a potential district-scale mining operation.

From their initial phase of exploration last fall at the former Keeley and Frontier Mines to drilling this January at the former Bellelen Mine, the company is finding that cobalt occurs in different styles of mineralization in different geological settings.

An objective of the company’s $7-million exploration program this year is to test different areas to pinpoint those places with the best potential.

“Structural controls on cobalt-silver mineralization in the Camp are poorly understood and initiatives like the one announced today allow us to improve our geological models and create shareholder value,” said First Cobalt president Trent Mell in a Jan. 24 news release announcing the MERC partnership.

“Our commitment to research and innovation is underpinned by our conviction that this historic mining district can be revived more quickly by embracing innovation as a core element to our exploration strategy.”

A professional geologist with more than 30 years of experience in academia and industry, including stints with Kinross Gold, Gold Fields, and Miramar Mining, he studied silver deposits in the Thunder Bay district for his master’s thesis.