KWG makes it case for a Ring of Fire railroad 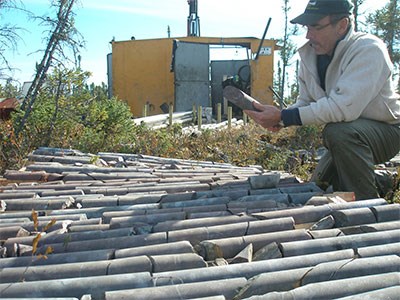 KWG Resources is appealing to the federal government to support a railroad governance model to its chromite discovery in the Ring of Fire.

A Ring of Fire railroad wins out over road in the long haul. That's the conclusion drawn by international engineering firm Tetra Tech in its report to KWG Resources after crunching the numbers of building a railway and a permanent road to the prospective mining camp in Ontario's Far North.

The study commissioned by the Toronto junior miner is aimed at making a federal case for a railroad to access chromite in the James Bay lowlands.

The release of the study in February coincides with KWG's plans to drill off a new chromite deposit in the region and a pending Ontario decision on its railway right-of-way claims.

To Moe Lavigne, KWG's vice-president of exploration and development, said utilizing rail to move bulk tonnes is a nobrainer. It's basic Mining 101.

“You can't develop mineral deposits unless you have a way to get it out. Canada's full of stranded deposits out in the middle of nowhere that if they were parked in Thunder Bay or Sudbury would make great money.”

KWG, through a subsidiary company, Canada Chrome Corp., staked a 330-kilometre-long string of mining claims from the Ring of Fire south to a former whistle stop on CN Rail's (CN) main cross- anada near Nakina in northwestern Ontario.

That corridor has become a valuable and contentious piece of ground. KWG has a 30 per cent ownership of the Big Daddy chromite deposit which it shares in a testy relationship with its majority partner, Cliffs Natural Resources.

The Ohio mining heavyweight wants the Ontario's Mining and Landings Commissioner to grant them an easement through KWG's claims soas to run an access road north. A final decision is pending.

“We were ahead of the game,” said Lavigne. “The reason we staked those claims was to build the railroad and make this deposit viable.”

KWG has made some strategic moves this winter through an option and joint venture agreement with Bold Ventures to drill off chromite occurrences on its Koper Lake property in the Ring of Fire.

KWG's forward-thinking concept of development has irked some political and bureaucratic factions within Queen's Park, who are stalled in their negotiations with Cliffs over provincial power rates and the government's commitment to build an all-weather road to the mining camp.

Lavigne said the Tetra Tech report was written for the benefit of the federal government.

“The feds are serious that they're getting involved to make it happen because the Ontario government has really been fumbling the ball here.”

KWG is backing a transportation corridor concept championed by unionized employees from the Ontario Northland Transportation Commission (ONTC), which is being dismantled and sold off by the province. The “New Deal” concept would make ONTC the carrier of choice serving the Ring of Fire deposits.

Lavigne said his company has been talking to Ottawa about establishing a port authority for the Ring of Fire to provide a legal structure to develop the camp and install a public body to control the infrastructure, rather than having one mining company monopolize a railroad.

The company is also plotting to bypass CN by reviving an abandoned railway right-of-way between Nakina and Hearst, hook up with the ONTC and conceivably run chromite ore by rail to southern Ontario or Montreal.

The Harper government recently assigned FedNor minister Tony Clement to be the government's lead on the Ring of Fire file.

“Now that Tony Clement has stepped in, we're going to start seeing progress,” said Lavigne. “We've been talking to the feds about the port authority and raising the lion's share of money – through bonds – to build this railroad. That idea resonates with the feds. Ottawa can't figure out why Cliffs wants a road. It doesn't make economic sense until they prove it to us.”

In its report, Tetra Tech said the capital costs to start laying track through the swamps of the James Bay region are $500 million more than carving out a road.

But rail is more flexible, more reliable, can haul more tonnes, is cheaper to operate, is cheaper by the tonne, and gets even more cheaper the more tonnes you put on it, especially over the long term. Tetra Tech said with mining activity sure to expand in this remote region, a road “is not a suitable option.” The Ring of Fire has the potential to produce 220 million tonnes of ore annually, and a mine life could last as long as 146 years.

As a measuring stick, Tetra Tech based its numbers on a corridor moving three million tonnes of ore a year.

The direct cost of building a road is $566 million. Indirect costs like a service road, material hauling, technical services and other costs balloon the price to more than $1 billion.

To build a single track railway with sidings and bridges would cost $896 million. Indirect costs push it to more than $1.5 billion, 50 per cent higher than a road.

Tetra Tech estimates the annual road maintenance budget at $183 million for labour, trucks and fuel. For rail, yearly expenses would be $31.6 million, much of that track maintenance and crewing.

But the consultants identified a huge obstacle in building a road or railroad as the lack of suitable aggregate in the immediate area, particularly in the vast swampy expanse of the James Bay lowlands. And the cost to truck aggregate out to a remote construction site gets pricier by the kilometre. From 25 to 100 kilometres away, trucking costs range between $22 million and $119 million a year.

Running 70-tonne ore trucks over on a bush road chews up more aggregate every year in maintenance. The consultants said it makes more economic sense just to use what aggregate is available for a railroad bed.

Building a road would take 4.5 years. Building a railroad is 7.8 years. Both options require bridge work to cross several streams and major rivers like the Albany and the Attawapiskat Rivers.

The consultants recommend that construction begin “as early as possible.”