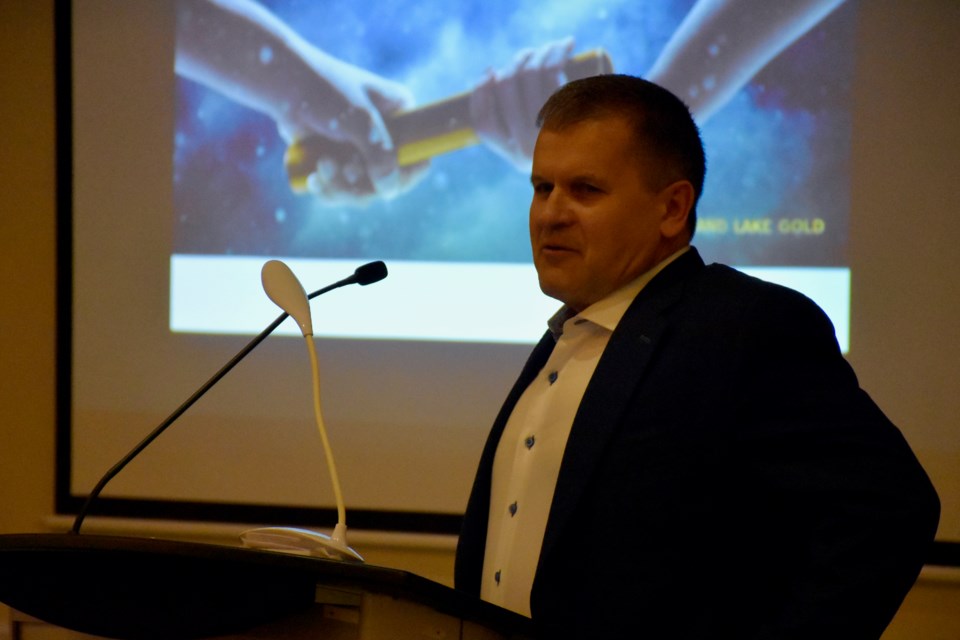 Kirkland Lake Gold president and CEO Tony Makuch talks at the Timmins Chamber of Commerce's Inside Their Business event on March 20. (Maija Hoggett/TimminsToday)

There are a couple messages Kirkland Lake Gold’s president and CEO wants people to take away from his March 20 talk before a Timmins business crowd.

Tony Makuch was the featured speaker for the Timmins Chamber of Commerce’s quarterly Inside Their Business event at the Porcupine Dante Club.

The high-grade gold producer operates the Macassa Mine in Kirkland Lake, and also has the Holt and Taylor mines in Matheson.

For 2019, and into the future, he said there is still a lot that is going to happen.

He said one of the company’s core competencies “is that we spend upwards of close to over USD$100 million in exploration and we’ve been finding value and success with the diamond drill bit and we’re going to continue to do that.”

By having exploration dollars in the region, he said it will come back with new value creation for the future.

Right now in Canada, Makuch said they employ about 2,000 people. Including contractors and service providers, that number is more than 2,500 people.

Last year, it was announced that a new shaft with a capacity of 4,000 tonnes per day would be sunk at Macassa, which will improve ventilation and support higher production.

With that project, Makuch said there is potential to grow its workforce.

Another goal of the shaft project is to extend the life of its mines.

He noted the lifespan in Kirkland Lake a couple of years ago was about eight years, with five years at Holt and a few years at Taylor.

“Part of our goal with the shaft is to create 30 to 40 years of mine life here, and so what it means for the company and the area and the people is sustainability in the region,” he said.