"My View from the Blackened Rocks" by Cathy Mulroy was launched at the Steelworkers Hall in Sudbury on Oct. 6
Oct 17, 2019 10:00 AM By: Colleen Romaniuk 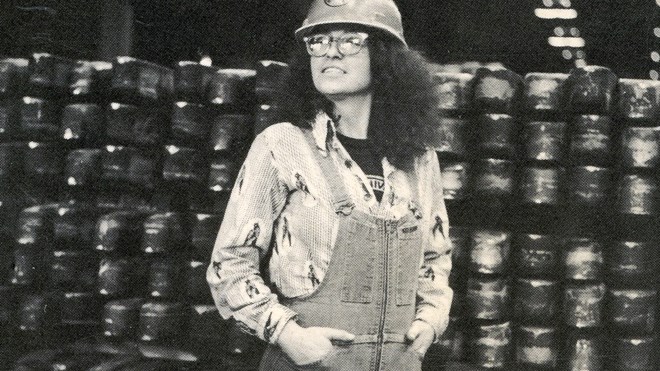 Throughout her career, Cathy Mulroy has fought tirelessly to raise awareness about sexual assault and harassment and paved the way for women working in male-dominated industries. (Supplied photo)

In 1974, after becoming one of the first women hired in a non-traditional role at INCO since the Second World War, the Sudbury native, who stood at 5 feet, 1 inch and weighed 105 pounds, was quickly labelled a troublemaker.

As a 19-year-old mother stuck in a toxic marriage, Mulroy signed up to work in the copper refinery in the anode department casting molten metal copper with the hope of earning enough to become financially independent.

She was often found guilty for the crime of sticking up for herself, and in Mulroy's own words, she "never put up with crap."

Years later, after Mulroy retired, she decided to write a book about her experience using all the material she accumulated over the years. Mulroy documented everything, writing on cigarette packs, paper towels, and in diaries, collecting newspaper clippings, and more.

Mulroy's memoir, My View from the Blackened Rocks, was self-published by Tellwell Talent Inc. this year. The book launch was held on Oct. 6 at the Steelworkers Hall in Sudbury.

The memoir details her view as a young woman working in a male-dominated field.

While some of the stories she shares humorously emphasize Mulroy's grit and perseverance, they are also stark reminders of the struggles women faced in the past.

She was a regular target of threats and abuse, and she often had people showing up to her house in the middle of the night and leaving electrical staples in her driveway.

But no matter how bad things got, they just couldn't keep her down.

One night while working the graveyard shift, she and the guys were stuck in the break room waiting for the furnace to warm up. It was 3 o'clock in the morning and they were told that the furnace wouldn't be ready until 6.

“People were kind of getting antsy,” said Mulroy. “We had to sit there for three hours, 40 men and me in a room. So here comes a guy with a crowbar and he pries the door of a locker open.”

The locker door belonged to someone from day shift. He pulled out a stack of Hustler magazines filled with pornographic images of women.

Mulroy approached the foreman to tell him that this was making her feel uncomfortable. But this was another time – she was told that this was company culture and if she didn't like it she could go work somewhere else.

After the guys realized she had talked to the foreman, things got worse. They started to plaster the pictures all over the walls in the break room.

A few days later, Mulroy drove her mother to a bookstore and made a discovery of her own.

“There on the floor were a pile of these (pornographic) magazines,” she said. “When I started thumbing through them, I realized they were all pictures of (naked) men, at the ready.”

So she went back to work armed with scotch tape and pictures of her own ready to exact her revenge.

Mulroy kept the books at work just in case her pictures got torn down. She hid them in the ceiling tiles of the woman's washroom in the anode (which wasn't built until five years after INCO started to hire women).

The foreman eventually approached her and told her to stop because the guys weren't happy about the photos.

“Well, if you don't like it,” said Mulroy, “go work somewhere else.”

Mulroy worked in the anodes at INCO for around 12 years. During that time, she separated from her husband and became a single mother to two children.

She recalls the gruelling shift work and the near-constant stream of harassment. Although INCO's move to hire women in the '70s was groundbreaking, there were still a lot of barriers to opportunity.

It was illegal for women to work in the mines before and after the war. Due to labour shortages, INCO was forced to hire 1,400 women during the Second World War. But while the women worked in the crushing mills, the rock house, and the copper refinery, they weren't allowed underground and they weren't given official titles.

“During the war years, the supervisor was called the maître d',” said Mulroy. “She didn't really have an official position.”

In the '70s, the women still weren't allowed underground. They struggled to find safety equipment and clothing that fit their smaller frames. People's attitudes towards women in the workplace hadn't changed, and the environment just wasn't built for women.

After being injured in a work-related accident in 1986, Mulroy, who hadn't graduated from high school, decided to go to Cambrian College to take some courses in psychology and adult eduaction.

Even then, she found that her reputation followed her.

“Their opinion of me before they even came to my classroom was that of a troublemaker,” she said. As they got to know her, however, things started to change.

Mulroy prides herself on her work as a health and safety instructor during her career and for being able to address sensitive issues (including AIDS and prostate cancer) with INCO employees.

She has always bee a champion for women's rights.

In the past, Mulroy has worked with Women of Steel, an activist arm of the United Steelworkers Union, to organize the Celebration of Women and Every Miner has a Mother events.

As an early advocate for the “Eye in the Sky” camera in the Elgin Street underpass in Sudbury's downtown, Mulroy fought for women's safety and volunteered her time with the Sudbury Women's Centre and the Sexual Assault Crisis Centre.

In 2003, she was honoured with a Women of Distinction Award from the YWCA.

Most of all, she has paved the way for women entering male-dominated industries. She has proved time and again that women in the trades do have a right to be there.

From her very first grievance at INCO back in the '70s to the publishing of her memoir today, Mulroy has always been ready to stir the pot.

My View from the Blackened Rocks is now available for sale in Sudbury. To purchase a copy, contact Cathy Mulroy at mulroysview@gmail.com.