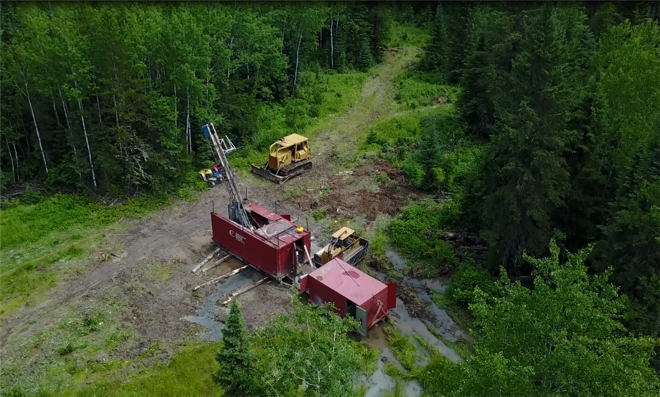 Drilling on the Dixie property in 2017 (Great Bear Resources photo)

The Vancouver junior miner announced Nov. 19 that it has completed the acquisition of the Dixie Gold Project, a process that began in 2017 through an agreement with Newmont Mining.

The company holds 13,000 hectares on two exploration properties, Dixie and West Madsen, south of the community of Red Lake.

Dixie is the main focus with Great Bear conducting 11,000 metres of drilling over the last two years. It’s a 15-minute drive southeast of town, down Highway 105.

Now cashed up with $10 million in financing, the company is starting a new 150-hole, 30,000-metre drill program that will run through 2019 to test high-grade gold zones and other identified targets.

Through drilling, prospecting and geophysical work, Great Bear said it is applying a new geological and structural interpretation of the property, which has an extensive exploration history.

At Dixie, they’ve tracked gold mineralization along a 2.3-kilometre strike of a 10 kilometre trend. A high-grade gold zone includes intervals of 16.35 metres of 26.91 grams per tonne (g/t) gold and 7.00 metres of 68.76 g/t gold. The system is open along strike and at depth.

Those results were enough to convince Rob McEwen and McEwen Mining to drop $5.7 million on the project for a 16.3 per cent stake in the company.