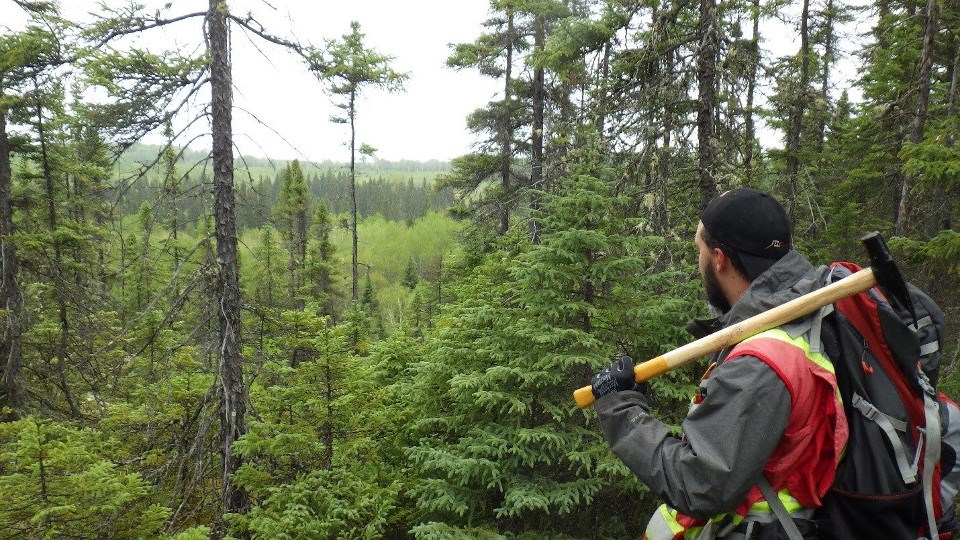 Mining and exploration companies are inherent hoarders when it comes to collecting and storing mountains of data.

But the layers and volume of all this technical information can outstrip people’s ability to put the pieces in place to unlock the hidden value of a prospective piece of ground.

That’s what Denis Laviolette often noticed while working for a major Toronto financing firm when junior mining companies would come through the door looking for exploration capital.

“The data is paid for and is just sitting there,” said Laviolette, a professional geologist who worked in Kirkland Lake, Timmins, Red Lake, and internationally before getting into the field of analytics.

“Someone just needs to come in with new tools and new technology to extract the value out of it.”

It’s what spurred him to create GoldSpot Discoveries and become its CEO in 2016.

The fast-growing, 30-employee company, which won accolades as a finalist in the 2016 Integra Gold Rush Challenge and Goldcorp’s #DisruptMining Challenge in 2017, became the first AI mine tech company to go public, listing on the TSX-Venture Exchange early last year.

Heralded by the mining media as taking a "Moneyball" approach to geophysics – a comparison to the 2011 Brad Pitt film Laviolette is only too happy to run with – his company is making inroads into Northern Ontario.

He likens his company’s approach to a 1950s-era doctor being handed a CAT scan and having no idea how to interpret it.

“If someone handed me raw geophysical data, I wouldn’t know where to start.”

Headquartered in downtown Toronto with a tech hub in Montreal, GoldSpot brought two worlds of thinking together, blending a team of geologists and geophysicists with data scientists and engineers.

Like peeling the layers of an onion, GoldSpot uses machine learning to “interrogate” data sets to pick out patterns and previously unrecognized trends to help find new discoveries on a property-level or regional scale.

With exploration dollars scarce and fewer major discoveries being made, progressive companies are willing to embrace new technology to de-risk their projects, cut exploration costs, and improve their mineral hit rate.

“We often think that mining has been in the Stone Age – it never has been,” said Laviolette.

GoldSpot has found a receptive audience from clients such as Sprott Asset Management, Hochschild Mining, Yamana Gold, and McEwen Mining.

Last year, GoldSpot shifted into the junior mining space as their technology seems to work just as well on greenfield properties as it does inside established mining camps.

Laviolette said there’s such a wealth of publicly available and sophisticated geophysical and geochemical data that the "recipe" of what’s learned from heavily mined areas can be applied to underexplored places, like the James Bay lowlands, to predict where the deposits might be found.

“What we are learning – and training off of – are the patterns that we’ve been able to recognize and map in the data-dense region.”

Last March, they took a half-million-dollar investment stake in Sudbury’s Manitou Gold to prepare a holistic “whole Earth” model for its Dryden and Wawa properties.

The company swung a similar deal in taking a $1-million flow-through share stake in Pacton Gold to evaluate its Red Lake project.

Despite the corporate name, Laviolette described their technology as completely “resource agnostic.”

In October, they landed a contract with Vale Canada to look for new discoveries at the Coleman nickel and base metal mine in Sudbury.

The focus of the $104-million government and industry-funded study is to understand the underpinnings of some of Canada’s most extraordinary zones of mineralization.

Laviolette calls the “pinnacle” to be part of a combined effort that brings all the different disciplines of the geological community together in a nationwide project.

“We’re collecting data that we’ve never had access to and never been able to see.

“It’s the first time we’re really taking the lid off of the earth and looking at how these plumbing systems differ and what are the commonalities.

“We are basically ingesting all of that incredible data from these different regions and it’s up to us to find the patterns and sort of unravel that ball of yarn of why, where and how all this fits together.”

Where once GoldSpot occupied a niche corner of the industry, competition is now stirring, particularly the proliferation of small data-science shops from Australia.

One attention-getter was Goldcorp signing up IBM in 2018 to run their Red Lake exploration data sets through the Watson supercomputer. Those holdings have since been sold to Endeavour Mining from Australia.

Laviolette shrugs that off, saying there’s no push-button, machine-fed solution that spits out drill targets.

He falls back on having a diverse team that can scrub raw data to put together a solid exploration plan.

“There’s no one-stop formula or algorithm because every project is different. Mother Nature created every deposit differently with different rocks.

“You can’t create a one-size-fits-all software solution in this business. It’s really a custom build for every project.”

As the technology gains traction, GoldSpot is evolving from a service provider to a royalty-streaming and investor-attraction vehicle.

He thinks GoldSpot’s well-publicized quant approach to mineral exploration can piggyback on these blue-sky prospects to entice a new breed of millennial investor that’s intrigued by the AI data mining hook.

“How do we become part of their stories? They’ve got great land exposure, all the makings of what it takes to be successful, but desperately need capital. Maybe we can help with that process and draw attention to their narrative to help with financing endeavours?”