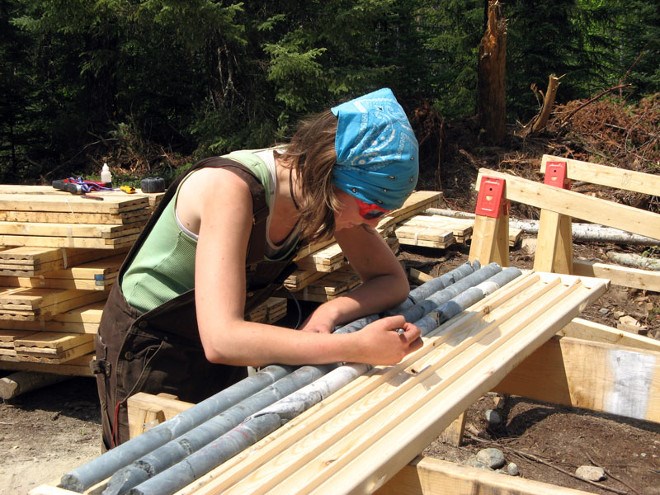 (Falcon Gold photo of its Burton property in 2011)

Falcon Gold is acquiring an exploration property near the Ring of Fire to scope out the area for vanadium and titanium.

The Vancouver company signed a letter of agreement with an undisclosed vendor for the right to acquire a remote 144-hectare Coomer Lake property, south of the deposits in the James Bay region.

The property is within 40 kilometres of Noront Resource’s chromite and nickel deposits, and 12 kilometres west of where a proposed north-south access road would go. It’s accessible only by plane or boat. The Attawapiskat River is less than 1,000 metres from the property line.

“The high-grade vanadium and titanium mineralization is hosted within a geologically significant intrusive unit that has been traced with airborne geophysics for several kilometers but has not been drilled beyond the historical discovery hole."

An airborne magnetic survey in 2003 identified a magnetite-rich band covered by glacial till. One company, Northern Shield Resources, pulled a high-grade vanadium and titanium core sample from the property in 2007 while drilling for platinum group metals and chromite but didn't follow up on the occurrence.

Under the terms of the agreement, Falcon will issue 400,000 common shares to the undisclosed vendor and to make cash payments totalling $185,000 over four years.

Falcon Gold has amassed a slew of varied mineral properties across Northern Ontario, including its Central Canada gold project east of Atikokan, its Wabunk cobalt-copper project near Ear Falls, and its Burton gold project, 180 kilometres north of Sudbury.

The company is also in the process of picking more than 20,000 hectares of former gold, copper and silver mine properties in the Sierra de Las Minas District of Argentina.

Vanadium is growing in importance for applications mainly in global steel manufacturing and to a lesser, but growing, extent in renewable energy storage where it is regarded an alternative choice to lithium ion.

Titanium is increasing in favour as an alloy in the aerospace sector because of its superior mechanical properties.