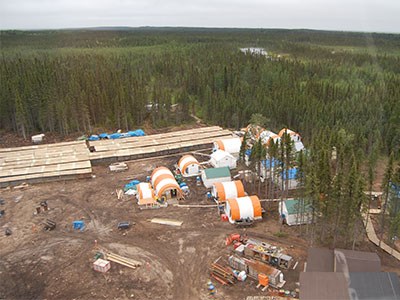 The federal environmental assessment of Cliffs Natural Resources’ chromite project in the Ring of Fire has been terminated.

The federal environmental assessment of Cliffs Natural Resources’ chromite project in the Ring of Fire has been terminated.

The Cleveland-based iron ore miner notified the Canadian Environmental Assessment Agency (CEAA) on Jan. 5 that it wanted to halt the comprehensive study process that began in September 2011.

The CEAA posted the notice of termination on its website, Feb. 5.

Cliffs is now looking to sell its chromite properties in the James Bay lowlands, including its flagship Black Thor deposit.

It’s been part of a slow retreat by Cliffs, once regarded as the star mining player in the Ring of Fire, to eventually pull up stakes in Ontario following a management shakeup last summer.

New Cliffs chairman and chief executive officer Lourenco Goncalves told national media outlets last fall that the Ring of Fire didn’t fit into their long-range strategy. The company, instead, is focusing on its core iron-ore assets in Michigan and Minnesota, and catering to its domestic customers.

Since 2010, Cliffs spent $500 million on outlining the mineral potential at Black Thor, but ran into a series of obstacles in securing agreements with the provincial government and First Nations on extending transportation infrastructure into the remote region.

Capital spending on the project was suspended and Cliffs sold off its remote exploration camp to Noront Resources in May 2014.

The company is also looking to sell its Bloom Lake iron-ore assets in northeastern Quebec by year’s end. Cliffs spent $6 billion on the project over three years without turning a profit and has placed those assets under creditor protection.

A Cliffs’ spokesperson was not immediately available to comment on the company’s timelines to sell its chromite properties.

The project site, located 540 kilometres north of Thunder Bay, was pegged to be a 6,000 to 12,000-tonne per day open pit and underground mine and an ore processing plant with a 30-year mine life. The proposal included a north-south road corridor with a ferrochrome production refinery that was once slotted for Sudbury.

But that overland access plan ran into difficulties, too, as Cliffs feuded with KWG Resources, a Ring of Fire partner with a minority interest in the Big Daddy chromite deposit.

The two companies have legally sparred over Cliffs gaining access to a 330-kilometre-long corridor staked by KWG, a matter that’s still before the courts.

KWG served notice in late January that it intends to appeal a judgment made by an Ontario Divisional Court last July that overturned a decision by the provincial mining and lands commissioner denying Cliffs an easement to access road to its Black Thor deposit atop the claims of KWG.