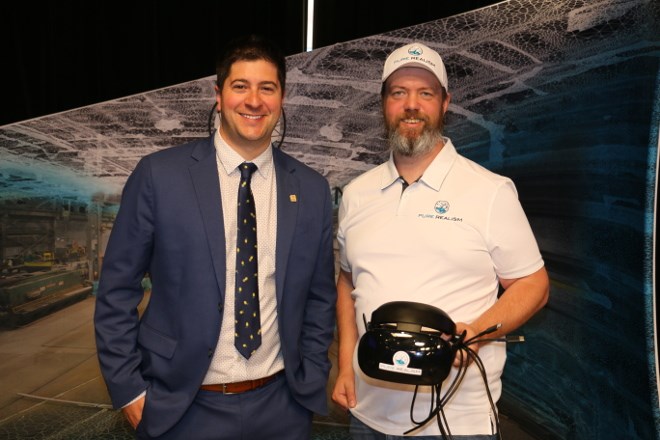 Cambrian College in Sudbury has received $1.75 million in federal funding along with the prestigious title of being a Technology Access Centre (TAC) for its expertise in mining research and technology.

The money is being allocated over a five-year period through the Natural Sciences and Engineering Research Council of Canada (NSERC) for the creation of the college's new Centre for Smart Mining. The announcement was made June 13 by Nickel Belt MP Marc Serré.

It means Cambrian is one of 47 NSERC research and technology centres located in post-secondary schools across Canada.

Ironically, Serré made his presentation via a video-conference link from Ottawa that had a technical audio glitch lasting nearly three minutes before the audio level was restored.

Serré said Cambrian was well positioned to advance more entrepreneurial ventures in the mining supply and service sector because of the college's wealth of experience, expertise and existing relationships with the mining industry.

“We can confidently expect that through its Centre for Smart Mining, Cambrian will become an even greater resource for mining technology developers and producers in Nickel Belt, Greater Sudbury, Northern Ontario and around the globe,” he said.

Also speaking to the crowd at Cambrian's e-Dome was Mike Commito, the college's director of applied research, who said it was an exciting milestone for the institution.

“To establish a Technology Access Centre is really the high water mark of college applied research activity in Canada.”

The process began last summer with a formal application to the federal government. From there, a group of scientists visited Cambrian to review its facilities and research programs. There are only two TAC facilities in Canada with mining-related applied research, the other being in Quebec.

Commito thanked industry partners in Sudbury who stepped forward to vouch for the research done by Cambrian staff and students to help their businesses.

One of them was Sudbury entrepreneur Kris Holland, president of Pure Realism, a company specializing in creating 3D imaging, animation and virtual reality of large venues, something that can be applied to the mining industry.

Holland told the audience that his business needed research funding, but Cambrian helped out beyond that.

“We came to the college, first and foremost, for money. But when we got here, we found so much more. We found people who knew what they were doing, who had expertise that we were lacking and were able to take that money and bring it together into a project that we were able to move forward.”

The federal money and the TAC designation means that over the next five years, Cambrian should be able to attract more students and faculty to do mining research. After that, Cambrian will have to re-apply for continued funding.

“Our main focus right now over the next three to four (years) is to really build up the business model for the TAC and start delivering these services,” said Commito. This would demonstrate the value of the program.

College president Bill Best said the TAC announcement was the culmination of more than 10 years of effort by staff, students and business partners.

“It's a real marker in the sand that shows our ability to enrich the student experience, to increase our influence globally, and actually make a difference for everybody and everything that is happening," Best said.

“We are making a difference for our small and medium-sized enterprises. They come to us with problems. We connect up with that and we come up with solutions.”