Beyond the golden mile

By Edgar J. Lavoie Bill Love's six-foot-four frame straddles a quartz vein as wide as his hips. It is a sunny autumn day in the middle of the northern bush east of Lake Nipigon. For the past three years, Sage Gold Inc.
0
Dec 15, 2008 3:12 PM By: Northern Ontario Business Staff 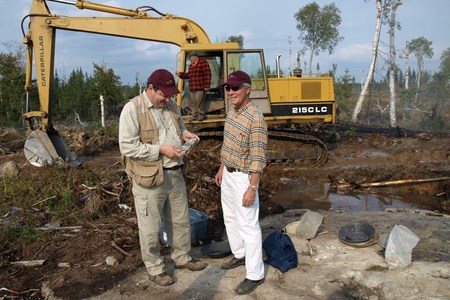 Bill Love, VP/Business Development, examines the visible gold in a channel sample on the Golden Extension. He then encourages John Walter, an investor relations consultant, to take the rock home. That may explain Walter's smile.

Bill Love's six-foot-four frame straddles a quartz vein as wide as his hips. It is a sunny autumn day in the middle of the northern bush east of Lake Nipigon.

For the past three years, Sage Gold Inc. (SGX:TSX-V) has been exploring its base metal properties in the Beardmore-Geraldton mining camp. Now that gold is around USD $900 an ounce, Sage is growing more excited about the gold values in its assays.

Bill Love, vice president/business development, is standing on Sage's newly discovered gold property in the Jacobus East Area. Last fall and winter, they were focusing on the Jacobus South Zone and the Onaman Property, pursuing values in copper, nickel, and zinc, mingled with interesting gold and silver numbers. This spring they sent out prospectors to scour their property adjoining the huge gold find at the Hercules Property of Kodiak Exploration Limited.

Their prospectors struck gold in an outcrop about five kilometres northwest of Kodiak's Golden Mile Zone. Located in a clearcut in the Lake Nipigon Forest, the new showing had a bush road to it, but the road was impassable because the Ministry of Natural Resources had pulled a bridge over Fairview Creek.

That sunny Monday, Nigel Lees led the writer, a group of investors, and a number of geologists to the find they call the Golden Extension Showing. Lees, who is Sage's president and CEO, led the party from the field office, located between the small communities of Beardmore and Jellicoe, which are accessed by Highway 11.

The Kinghorn Road is a primary bush road striking north of the highway. Just past Kilometre 43 on the Kinghorn, a secondary road heads west for almost 11 kilometres, over the newly installed bridge, to the Golden Extension.

A backhoe operator is engaged in stripping the overburden, and a group of men are washing down the vein and taking channel samples, which they extract with a special rock-cutting saw. The machine has been operating only a week, and already 200 metres of strike length have been confirmed, although not completely trenched.

The broad quartz vein runs through stock known as the Elmhirst Lake Intrusion, a granodioritic rock.

Ted Cox, Sage's field geotechnician, pans a handful of topsoil for the visitors, and points out the gleaming gold tail. He has also found several instances of visible gold (VG) in the vein and gold values in the host rock. The vein at its broadest point, he says, is 1.3 metres. He recently sent out 34 channel samples for assay, and is preparing another batch.

Sage has provided several channel samples for the visitors to cart away. It takes an expert eye to spot the VG. Cox describes one sample: quartz, 20 per cent pyrite "married" to VG, 2 per cent chalcopyrite, and black streaks which are magnetite.

Earlier in the trip, the Sage party had stopped at Kodiak's Golden Mile Zone, smack in the middle of its "jewelry box" where the quartz vein is three-metres wide. There, two of Kodiak's top executives had laid out their progress to date: three-kilometres of strike length, most of it stripped and all of it drilled, trending to the northwest.

Kodiak has found some spectacular gold values, not only in the veins, but in the host rock itself, the Elmhirst Lake Intrusion. Their drill hole intersections dip down to 550 and 570 metres already. They have stripped and drilled two parallel zones. They send about 1,000 samples a day to the assay lab.

One of Sage's visitors comments: "I'm speechless. It's got tremendous strike and breadth and multiple vein structures with the opportunity [for all of them] to meet down dip." The result could very well be an "economic resource", i.e., an ore body to justify a mine. John Walter, the speaker, runs an investor relations firm on Bay Street.

This news is good for Sage Gold Inc. The writer and two others climb into a Bell Long Ranger helicopter and fly northwest along the Golden Mile line of strike. In a few minutes, the party disembarks at Sage's Golden Extension.

The zone is aptly named. None of the experts present doubts that the Golden Extension is indeed an extension of a vein system on Kodiak's Hercules Project.

Since that day in September, prospectors have identified a new vein near the boundary with Kodiak, along strike with Sage's Golden Extension and Kodiak's Golden Mile. Additional veins have been stripped in the vicinity of the original showing (Vein #1), for an aggregate strike length of 290 m in early November.

According to Nigel Lees, president, the company is currently devoting significant resources to its known gold holdings around Beardmore/Jellicoe, which include the properties of Paint Lake, Missing Link, and Solomon's Pillars. Other prospects have yet to be explored.

The company has gold properties in Kerrs Township, near Timmins, and in Nevada and Arizona. On September 22, Sage Gold shares closed at 12 cents, although its stock reached a one-day high of 80 cents last October.