Attawapiskat unhappy over Victor Mine issues

Discontent is simmering in the shadow of the De Beers Victor Mine, as members of the Attawapiskat First Nation grow frustrated with the company for what they perceive as inaction on issues ranging from discrimination to water quality.
0
Dec 7, 2009 1:56 PM By: Nick Stewart 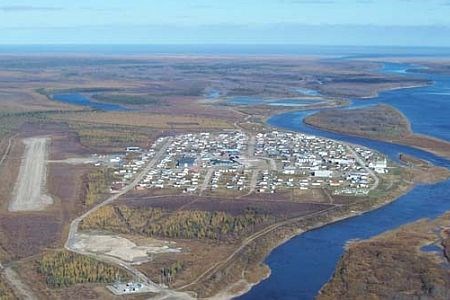 Attawapiskat First Nation leadership has expressed some concerns about a number of issues surrounding De Beers' Victor Mine 80 kilometres away. PHOTO SUPPLIED

Discontent is simmering in the shadow of the De Beers Victor Mine, as members of the Attawapiskat First Nation grow frustrated with the company for what they perceive as inaction on issues ranging from discrimination to water quality.

However, De Beers representatives countered that proactive measures have been taken at every step to ensure First Nation interests were being satisfied and the community continues to be thoroughly involved.

“We want to sit down at the table and say, ‘These are the issues, we mean business,’” says Attawapiskat First Nation Chief Theresa Hall.

“We’re through talking and now we want action.”

Located on the First Nation’s traditional lands 80 kilometres away, the Victor Mine is Ontario’s first diamond mine, producing 600,000 carats per year.

Dewatering of the site flows into the Attawapiskat River, leading Hall to express concern that the peatland’s naturally-occurring mercury may have unknown long-term effects.

The community relies on the waterway for fishing, hunting and medicinal plants and local whisperings of dead fish, where none had been seen before, is stirring fear, says Hall.

Not only is the company meeting the safe and acceptable mercury levels as laid out in the environmental assessment, but that assessment had been approved by the First Nation, he says.

Should mercury levels rise, steps are already in place to reduce it, though Ormsby says mercury is often naturally released regardless of mining, such as during a summer drought.

“We understand the connotation that any time hear the word ‘mercury,’ it does create an immediate concern, but it’s important to note that mercury is released naturally in the environment we currently operate in,” says Ormsby. “All of the commitments we’ve made and are living up to are indicating that the levels are exactly as predicted and are well within all the healthy guidelines and there’s no concern regarding the activity we’re doing increases any risk related to mercury at this time.”

This approach to the environment is being mirrored in rehabilitation research projects being pursued by De Beers, says Ormsby. This includes one being spearheaded by Laurentian University’s Daniel Campbell, in partnership with a variety of Northern Ontario research institutions.

Attawapiskat’s concerns extend beyond this issue, says Hall, who adds that although 1,800 live on the reserve, 2,000 members currently live elsewhere.

Some would return if the appropriate jobs and homes were made available, but the majority of the contracts held by the community are for menial, low-paying tasks, she argues. Worse, she says, these jobs have exposed residents to insults and discrimination from other workers at the site.

Ormsby also points out that all of the permanent contracts are joint-venture partners with the community, from site services to logistics and transportation, giving Attawapiskat a business interest in all of them.

What’s more, 90 per cent of the discrimination problems have come from within these partnerships, mainly during the construction phase, with six people having been fired to date.

Discrimination is in no way tolerated at De Beers or among its contractors, says Ormsby, and all complaints are fully investigated. Cultural sensitivity training is also mandated at all levels, as a strong level of cross-cultural understanding is a priority.

Such frustrations are something the company has worked ardently with Attawapiskat First Nation to mitigate, even from the outset, says Fowler.

While exploration began years before, discussions for the impact benefit agreement (IBA) began in 2002, followed by “hundreds” of community meetings over the following three years.