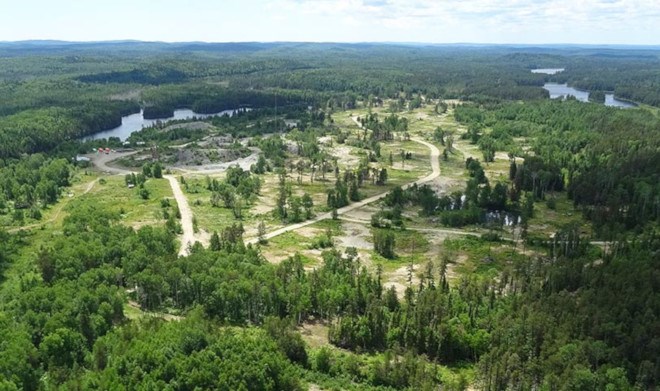 Argonaut Gold, the developers of an open-pit mine near Dubreuilville, is expanding its exploration program to look for more gold deeper down.

The company has raised $4 million in flow-through shares to boost the drill program at its Magino property from 6,000 metres to 20,000 metres.

Argonaut had been drilling in and around its proposed open-pit mine, down to a depth of 300 metres, to grow its mineral base.

This is the first time they're probing deeper and further out on their property to target high-grade gold.

In a Sept. 10 news release, Argonaut said halfway through their original drilling program they were seeing the same gold-bearing geological structures as next door at Alamo Gold's Island Gold Mine.

"We had budgeted a 6,000-metre program this year with the goal of locating these structures on our property," said president-CEO Pete Dougherty in the release.

The 2,200-hectare property is a former underground gold mine, 40 kilometres northeast of Wawa and 14 kilometres southeast of the town of Dubreuilville. Magino is located next to  Alamos's Island Gold Mine.

Valued at $427 million, Magino could create up to 550 construction jobs and 350 mining jobs with a 17-year mine life.

The plan is to track high-grade mineralization outside their pit, heading east, toward the property line with Island Gold. That exploration campaign willl continue into 2020.

"We are excited about the Magino project and the prospect of expanding the known mineralization at depth where, historically in the district, the grade of gold mineralization improves," said Dougherty.

The company said indications are that there's "strong potential" that the gold grades may go up as they go deeper.

"We are encouraged by the drill results and our success of locating the higher-grade structures with values from five to over 20 grams per tonne gold," said exploration vice-president Brian Arkell in the release.

"We have now traced the Island Gold Mine's Lochalsh zone and other structures onto our property from the adjacent property boundary, and they remain open to the west and at depth."

Last January, Argonaut cleared the federal environmental assessment hurdle to proceed with mine construction. With other regulatory approvals such as a construction permit and mine closure approval approval in place by 2020.

The Magino project is a former producer. Over a sporadic mine life, which began after the First World War, Magino produced 114,319 ounces of gold, grading 4.43 grams per tonne.