Anthony Pace spreads out a geological compilation map of the Algoma district revealing a vast sea of pink.
0
Dec 15, 2008 3:30 PM By: Ian Ross 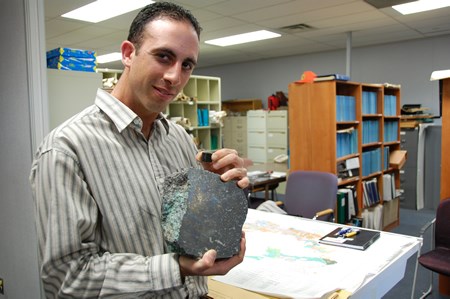 The Sault Ste. Marie district geologist Anthony Pace is the starting point for mineral exploration in the Algoma district.

Anthony Pace spreads out a geological compilation map of the Algoma district revealing a vast sea of pink.

In the rugged and uncharted interior, aside from the scattered triangular markers where traces of copper, zinc and the odd patch of carbonatite have been found, there is not a good understanding of the geology.

Most of the coloured areas are in townships hugging the North Shore of Lake Huron and the eastern granite shores of Lake Superior where junior miners are digging for uranium and base metals.

"All it takes is one claim unit staked in the middle of nowhere to cause a lot of curiosity," says Pace, district geologist with the Ministry of Northern Development and Mines' Sault Ste. Marie office.

"Rocks just don't stay in one spot. There are extensions and strike lengths to them, and veins can come out of nowhere."

Old and historic mining camps in Timmins-Kirkland Lake, Nipigon, Atikokan, Kenora-Dryden and Fort Frances have seen new and rejuvenated life with large scale geoscience efforts. But the Algoma district, which stretches from the eastern shore of Lake Superior, to Chapleau and over east to Elliot Lake, has been historically under-explored.

Even so, the last three years have seen historic highs in mineral exploration activity.

The most favourable ground continues to be north of Batchewana Bay on Lake Superior. From Mamainse Point heading inland through Ryan, Palmer, Nicolet and Norberg Townships, all the best ground in the Batchewana Greenstone belt has been staked up.

"Many of the mines in Ontario are associated with these large greenstone belts," says Pace, with some rock dating back 2.7 billion years.

If a full-blown government-sponsored geoscience effort were ever to get underway, this would be a good starting point. The land is home to two former copper producers, the Tribag and Coppercorp Mines, with all kinds of occurrences of copper, molybdenum and iron formations.

Companies like Amador Resources, Nikos Exploration and Aldrin Resources have all picked up ground.

"All the areas of high mineral potential have been grabbed," says Pace.

It was the scene not long ago of a hotly contested staking rush from a number of prospectors and companies when the land came open. The central part of the belt is privately owned by the Algoma Timberlakes Corporation.

Amador Resources, which is part of the Golden Chalice group lead by famed developer Richard Hughes and CEO John Keating, are working properties in the district, conducting small scale geological mapping and preparing for geophysical work.

North of Sault in Van Koughnet Township, the former Sill Lake lead-silver mine is being worked by RX Exploration. Together with Gilead Mineral Corp, the companies have partnered in completing a drill program and de-watering an old portal site down to the 100-foot level to conduct some assaying for a technical report.

Old exploration and mine plan maps showed potential for further exploration. The company felt best way to do that was get underground and see what can be sampled.

North of Ranger Lake is good ground for both diamonds and uranium. There are a series lamprophyre dykes on ground acquired five years ago by a series of companies but data hasn't been submitted, "so we don't know what was found," says Pace.

North American Gem is looking for uranium in an area east of Ranger Lake on a 19,000-acre land package north of Highway 556. They conducted an airborne radiometric survey and are awaiting the results.

There's a great amount of staking around Rocky Island Lake where radiometric map show "pods" of high radioactive area, some of the highest measured in Ontario. The high radioactive elements may indicate the deposits in Elliot Lake area may have come within granites to the northwest.

The world stock market crash and credit crunch has many juniors playing wait-and-see in preserving their cash with markets down. Few have the capital to start acquiring ground to work on smaller projects.

Pace expects the coming winter exploration season to be slow, with many companies prioritizing their projects.

"The boom that just happened where people just acquired any property that became available, seems to be slowing down now.

"The demands for commodities is still there. Much of what's happened is based on speculation. But companies still have enough money in their treasury to further their more advanced projects."

The Algoma district is best known for its past -- and possibly future -- uranium mining at Elliot Lake.

With half of Ontario's electricity generated from nuclear power, uranium is viewed as commodity of the future.

Toronto's Pele Mountain Resources has the most advanced exploration project in the districtt and is edging closer to a low-grade, big tonnes uranium mine east of Elliot Lake. The company filed a project synopsis on its way to obtaining permitting from the Canadian Nuclear Safety Commission.

Another junior miner, International Montoro has conducted a drill program on their Serpent River property just east of Pele. Though it has never been mined, it was previously drilled by Rio Algom in the 1970s.

To the north, Appia Energy is looking for uranium with a drill program this past spring and summer near Quirke Lake.

The Sault offices plan for a three-year geoscience initiative covering Goulais Bay to Elliot Lake is on the backburner with the Ministry's attention focussed on the McGuinty government's call for widespread land use environmental and development planning in the Far North.

Yet Pace says the bulk of exploration and mining activity in Ontario is happening in the Near North.
The Algoma district's only producing mine is the trap rock quarry at Bruce Mines on Lake Huron's North Channel, operated by R. W. Thomlinson. About a million tonnes of the rust-coloured industrial stone is shipped out annually by lake freighter to U.S. markets.