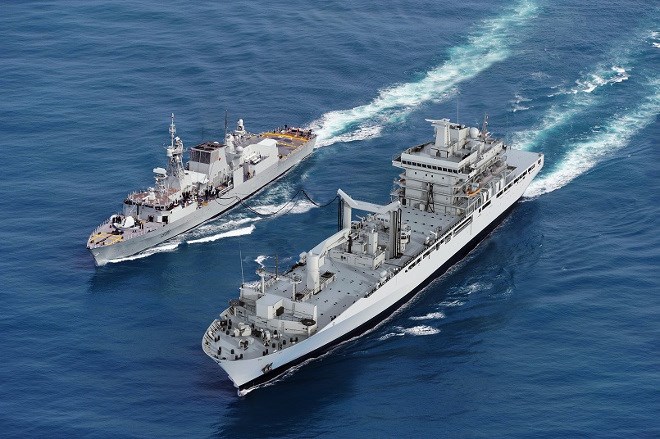 A West Coast shipyard will be sourcing finished product from Algoma Steel to build support ships for the Canadian navy.

Under the contract, Samuel Custom Plate and Profiles (CPP) will subcontract Algoma to provide the plates used to build part of the hulls for these ships.

The value of the contract and the specific steel order were not disclosed in the news release.

According to the shipbuilder, Algoma represents one of almost 80 Ontario suppliers Seaspan is working with under the National Shipbuilding Strategy, representing more than $850 million in work to replenish the fleet for the Royal Canadian Navy and the Canadian Coast Guard.

In a Seaspan news release, Algoma Steel CEO Michael McQuade was pleased to get on board.

“Being competitively selected to provide a quality Canadian made product is an encouraging endorsement of our capabilities. The Algoma team is very proud to participate once again in a project of such national significance, contributing to the rebirth of the shipbuilding industry here in Canada.”

Seaspan operates three yards in North Vancouver and Victoria with a combined workforce of more than 2,300.

“As we work to fulfill our role under the National Shipbuilding Strategy (NSS), Seaspan Shipyards is pleased to work with partners like CPP and Algoma,” said Seaspan CEO Mark Lamarre.

“As our supply chain expands, the NSS will continue to encourage investment by Canadian companies, support the development of export opportunities, and create highly skilled, middle class jobs across Canada.”

Algoma Steel Inc. commits to carbon neutrality
Jun 22, 2020 12:00 PM
Comments
We welcome your feedback and encourage you to share your thoughts. We ask that you be respectful of others and their points of view, refrain from personal attacks and stay on topic. To learn about our commenting policies and how we moderate, please read our Community Guidelines.