For two friends named Eric, food production wasn’t even on their radar until a few years ago when they alighted on the idea of shipping container farms.
0
Jan 8, 2016 3:52 PM By: Lindsay Kelly 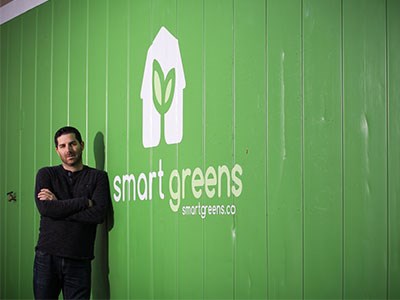 For two friends named Eric, food production wasn’t even on their radar until a few years ago when they alighted on the idea of shipping container farms.

Eric Bergeron and Eric Amyot, both of Cornwall, Ont., owned an internet marketing company and a tree-service company, respectively, until their green ideology got them thinking about the food they eat.

“We’re both environmentalists; that’s how this came to be,” Bergeron said. “We are not farmers or food growers, but we see that the future of food requires Canadians to grow food inside.”

The pair purchased its first farm — a turnkey business in a box — from Boston’s Freight Farms in July 2014 and set up in a downtown Cornwall parking lot as Smart Farms. Since then, the operation has produced fresh basil, kale and other greens for a network of the city’s restaurants.

The climate-controlled closed system grows crops using hydroponics and LED lighting to replicate the sun, Bergeron explained. The environment is fully controlled to create the perfect growing environment, without typical stressors like pests and climate.

“Part of our real advantage in any kind of closed container farm is that you’re not wasting any water; it’s going directly to plant growth,” Bergeron said. “When you farm outside, a lot of that water just seeps into the soil, which is OK, that’s good for the ground, but it doesn’t go directly to the plant.”

Plants are cultivated from seed and then transplanted into 264 ZipGrow vertical growing towers. Bergeron said each container has room for 3,500 to 4,000 plants and about a quarter of that is harvested every week.

Growing cycles and yields vary between crops, but as an example, Bergeron said the farm can produce 960 heads of lettuce every week, based on a seven-week growing cycle. The business partners have grown 15 different plants in the last 18 months, testing different varieties for their growing capabilities and economics.

Smart Farms’ goal is to create a network of 25 farms in Cornwall and Toronto within the next year, expanding to 150 farms in five years, to serve major grocery chains. Bergeron pitched the premise to a group of social impact investors in late November with an objective of raising $1 million in financing to make it happen.

At the same time, the partners are also looking to create a hub, called the Smart Greens Network, which would allow individual farmers to purchase a farm to set up in their own community. It would be licensed through the Smart Greens brand, providing operators with support, tools, and training from the network.

The farmer would grow and supply fresh, healthy produce to his local market, eliminating the transportation of goods over hundreds of kilometres and reducing costs.

That’s part of the reason the pair is working with Modular Farms on a new technology that would provide a more robust alternative to the container farms, which aren’t adequately built for harsh, Northern climates, he noted.

Bergeron calls the current food crisis in the country’s Northern regions “tragic,” saying there’s no reason people in the Far North can’t enjoy fresh, healthy food like the rest of the country when the technology to grow it is readily available.

Calculating the cost of lettuce in Nunavut compared to lettuce grown on site in a container farm, Bergeron said operators could realize a remarkable savings of $600,000 a year.

“Communities can save an incredible amount of money and get fresh, healthy food that they’re growing themselves, which I think is incredibly valuable,” Bergeron said. “That’s our social mission, to get food to where people cannot grow it and to always sell it at a fair, reasonable price.”

People shouldn’t have to choose between a $15 head of lettuce that is usually going bad by the time it reaches them, or less healthful choices that can be frozen but provide no nutritional benefit. And container farms can be profitable, he added.

As Smart Greens evolves, it’s constantly looking for the newest, most innovative technology to streamline the growing process further, but the company is fully aware it’s not the only player out there.

“We know we’re not the only company interested in this or interested in solving this, but, quite frankly, there’s such a big problem that I welcome anyone who’s trying to solve this problem right now,” he said.

“It’s sad, as Canadians, that we haven’t solved this problem.”