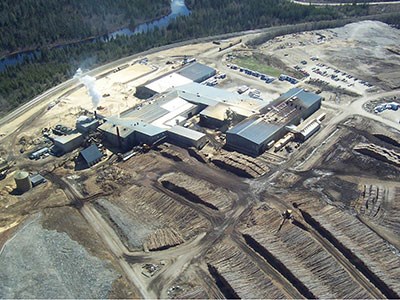 A new $15-million production line is being installed at White River Forest Products to boost production output at the North Shore mill.

The sawmill, located halfway between Sault Ste. Marie and Thunder Bay, is undergoing a $20-million overhaul over the next two years with a high efficiency production line arriving this summer, buttressed by a much-needed financing package.

“Our objective is very clear,” declared Dottori, CEO of the 140-employee operation, “we want this mill to be one of the lowest cost mills in Eastern Canada, and that will be by significantly increasing the yield on every tree coming in and in addition to the production level.”

The company finalized a new loan agreement in April involving Scotiabank, RoyNat and Comerica, which allows them to produce more board feet with a new production line.

Dottori was reluctant to divulge exact numbers on the financing package, since it involves another mill and private equity, but it provides enough to install a new $15-million state-of-the-art, high-speed COMACT line this summer, plus some working capital.

The fledgling company’s plan from the outset was to replace two of the mill’s three saw lines with one high-tech line. But a lack of financing had handicapped the company from making the upgrades sooner, said Dottori, the plain-spoken industry legend and founder of forestry giant Tembec, who joined the operation in mid-2013.

The mill is currently running at 110 million cubic metres of board feet, but the plan is to push capacity north of 150 million and improve productivity and the yield on wood.

“The line will run more than the other two put together,” said Dottori. “As a matter of fact, this new line will increase capacity with 20 per cent more production than the three lines put together.”

Outfitted with 14 scanners, the new equipment will optimize grade recovery which will maximize the lumber produced from a saw log. New debarkers are being added and they’ll be upgrades to the planer infeed.

“When we take a tree right now we’re getting half in lumber, half in chips. This thing will give us three-quarters in lumber and a quarter in chips. It’s a very significant cost reduction. It converts more of the tree into lumber.”

The two antiquated lines will be removed this summer to make space for the installation of the new line by Sept. 1, followed by a 30-day commissioning phase to “get the bugs out.”

Commercial production is pegged for Oct. 1.

Plans are in place for 2016 to increase the mill’s drying capacity by 25 per cent, he said.

“We’ve got excess drying capacity now but when we get producing up to 150-million plus, we’ll need additional capacity by putting in an extra dryer and by speeding up the planing line.”

The $20 million in upgrades over the next couple years will come from this financing arrangement and cash generation.

The revival of the White River sawmill has been a good news story for the North Shore of Lake Superior.

Dottori’s own company, Fadco Consulting, holds a commanding 49.8 per cent stake in the mill along with the town of White River and Pic Mobert First Nation.

About 35 Pic Mobert members are employed at the mill with others working in harvesting operations.

The mill was a high-cost operation when the previous owner, Domtar, padlocked the gates in 2007, coinciding with the collapse of the U.S. homebuilding sector and tariffs imposed in the cross-border softwood lumber dispute. But working in its favour, Dottori said, was a “tremendous wood resource.”

At some point, Dottori said, they’ll need a larger Crown fibre allotment, but for now they have a saw logs-for-wood chip exchange agreement down the road with pulp producers Aditya Birla Group in Terrace Bay.

Most of their lumber is shipped into the Toronto area to distributors like Home Hardware, Alpha and Weston, with about 30 per cent destined for the U.S. market, including some specialty products into California.

Dottori said the homebuilding market has been a volatile one this year with big market growth in the southern U.S. and northeast. A rough winter postponed spring construction and there remains excess sawmilling capacity, which caused a May dive in lumber prices that shuttered some mills when prices dropped below cash levels.

“But we’re lucky, we’re still running. Now prices have come up $20 to $30 in the last few weeks and we expect prices to get back up to normal levels within next six weeks. Going forward, it looks very optimistic. If housing goes up another 10 per cent, we’ll have an excellent market going forward.”