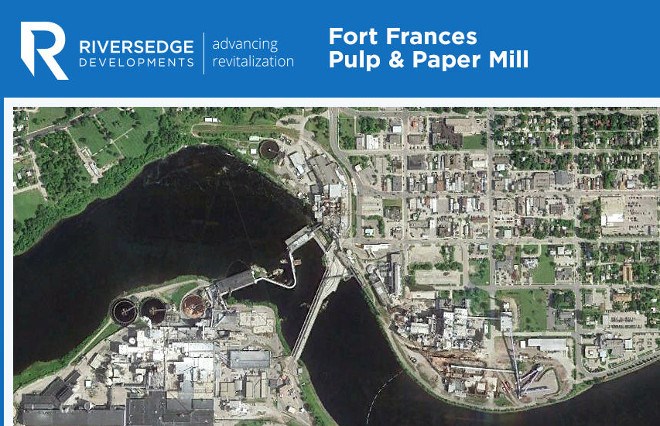 The news that Riversedge Developments now owns the shuttered Fort Frances pulp and paper mill doesn’t inspire much confidence from the town’s mayor.

June Caul said the CEO of the brownfield redevelopment company, Justus Veldman, paid an unexpected visit to town hall, July 10, to advise her, CAO Doug Brown, and two councillors that the deal with Resolute Forest Products has been finalized and that an acting mill manager has been appointed.

Despite the encounter, Caul said the municipality remains “in the dark” as Veldman gave them no indication of his future plans for the site.

A promised public announcement by Riversedge to the northwestern Ontario border community never came to be, leaving it to Resolute to break the news to a local media outlet.

That, among other things, is troubling to Caul.

She openly questions whether the developer is working in “good faith” with the town to help restore the community's industrial base, or if Veldman remains under a gag order from Resolute from fully disclosing his plans to possibly scrap the entire site.

“I’m feeling pretty uncomfortable about what the heck’s going on with him and his company. If they were doing something positive for us, they would certainly be here telling us.”

Resolute announced the closure of the mill in 2014 with the loss of 150 jobs.

Around Fort Frances, Riversedge had been rumoured for months to be Resolute’s preferred choice to take over the site. Last winter, town officials kept hearing about sightings of Veldman touring the site.

Veldman responded by email to Northern Ontario Business that he was not immediately available for an interview until next week.

Resolute spokesman Seth Kursman, who confirmed the sale to Riversedge in an email, suggested the new property owners will have more to say shortly.

“It’s my understanding that Riversedge Developments and some of their prospective partners and government officials are planning a public announcement in the coming days.”

Kursman added the dollar value of the sale was recorded with the Town of Fort Frances. Caul had no knowledge of any of that.

“There has not been any disclosure since this deal went through of what that price was at all. I certainly do not have any information on it.”

Veldman and Riversedge are no strangers to Northerners due their acquisitions and subsequent demolitions of paper plants in Sault Ste. Marie, Iroquois Falls and Red Rock.

That kind of track record worries Caul and council, who want to keep the mill and its machinery intact in the hopes a new operator will restart the operation. Kenora MPP and cabinet minister Greg Rickford has promised to help.

“We’ve heard stories about (Riversedge's) business dealings with other communities,” she said.

“The so-called redevelopment plans don’t come through to fruition, if at all.”

The municipality vows to stand up to any attempts to demolish the mill buildings through local site plan controls, should any permit applications be made.

“My big fear,” Caul said, “is are they going to sneak into town and to start take down the paper machines and taking it apart inside without us knowing?”

She hopes Riversedge will entertain selling the mill buildings to a new forest products operator that will draw on local Crown fibre.

Before last Christmas, the town was championing a new player, Rainy River Packaging (formerly Repap), which expressed interest in buying the mill.

But Montreal-based Resolute blocked them from bidding on the property due to their refusal to sign a non-disclosure agreement. Instead, Resolute opted for a site redeveloper.

Caul has also since learned that a deal may be in the works for a Rainy River-area First Nation entity to purchase and restart the biomass power plant portion of the mill.

Fort Frances is the second Northern Ontario mill property that Resolute has sold to Riversedge.

Veldman’s company acquired the former Iroquois Falls paper mill in 2014, two years after it was closed.

The property is now being marketed as Abitibi Commons, run by a Riversedge subsidiary called O’Clay, billed as a local distribution food hub for farmers in the Cochrane and Temiskaming districts. It’s run out of a warehouse, the last building standing on the site.

In the Sault, Veldman recently hinted of plans for a residential development in the city’s downtown core.

According to Riversedge’s single-page website, the company is located on King Street in Waterloo.

The company touts itself as a “restorative development company” that specializes in revitalizing distressed industrial properties “and the communities that surround them.”