Neonicotinoids — a type of pesticide used in agriculture and horticulture — have been implicated in honeybee colony collapse, but one scientist doesn’t believe a full ban on the pesticide is necessary, especially as it applies to forestry.
0
Jul 21, 2016 2:33 PM By: Lindsay Kelly 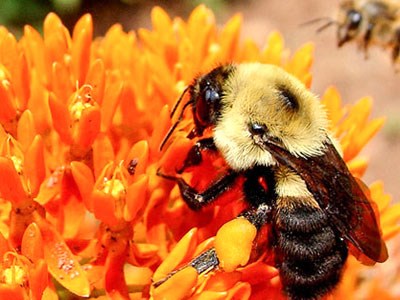 Neonicotinoids — a type of pesticide used in agriculture and horticulture — have been implicated in honeybee colony collapse, but one scientist doesn’t believe a full ban on the pesticide is necessary, especially as it applies to forestry.

David Kreutzweiser, a research scientist in the Forest Ecosystems Research and Assessment Team at the Canadian Forest Service in Sault Ste. Marie, was one of three Canadian research scientists appointed to the Task Force on Systemic Pesticides initiated by the International Union for Conservation of Nature’s Commission on Ecosystem Management.

Charged with reviewing 1,100 studies and reports on the topic, the task force released its findings in 2015, determining that neonicotinoids do adversely affect honeybees and, as a result, the surrounding ecosystem.

“Studies demonstrated that honeybees can receive an acute, lethal, toxic dose from a single flight through a dust cloud during seed planting, for example,” Kreutzweiser said during an April webinar.

“But perhaps more insidious was that increasing evidence shows that honeybees were also experiencing sub-lethal, harmful effects from prolonged exposure to low concentrations.”

Long-term exposure of low doses made the bees disoriented so that they didn’t return to the colony, and they had lower resistance to disease and other stressors, which led to an overall decrease in colony efficiency, he said.

An unfortunate result, Kreutzweiser said, could be lower pollination levels in areas where neonicotinoids are being used extensively.

Similar impacts were found on other species as well, such as aquatic invertebrates.

In PEI, for example, small amounts of the pesticides, used in potato production, have led aquatic invertebrates to stop feeding and reproducing.

In the Prairies, where neonicotinoids are used extensively in canola production, the pesticide has been found year-round in shallow bodies of water called “potholes.” The permanent presence of the pesticide reduces the amount of aquatic invertebrates, which reduces the emergence of insects, which results in less food for bird species, reducing bird reproduction, Kreutzweiser said.

In Ontario, with the onset of the emerald ash borer, researchers examined the impact of neonicotinoids on leaf matter, which is consumed by earthworms and aquatic insects.

The pesticide’s presence caused the earthworms and aquatic insects to stop feeding, “to the point that there was a significant reduction in organic matter processing overall, which could have, in some settings, a negative implication for organic processing, a critical ecosystem function in these areas,” Kreutzweiser said.

“I believe there’s sufficient evidence to suggest this warrants caution and adjustment in the use of neonicotinoids and, in fact, a number of jurisdictions are doing just this, especially that the widespread and prophylactic use of neonics should be regulated and reduced,” Kreutzweiser said.

But he cautions against an outright ban on the pesticides, saying they do serve a purpose in certain contexts.

Currently, the hemlock woolly adelgid is attacking hemlock stands across North America, and the most effective solution is a combination of the neonicotinoids imidacloprid and dinotefuran, Kreutzweiser said.

Unlike preventive use in agricultural applications, neonicotinoid application in forestry is usually targeted and tree-specific, narrowing the impact of the pesticide on the surrounding environment. So, if a forester wants to protect a valuable hemlock stand, the use of neonicotinoids is probably the best bet for success.

But if the issues associated with agricultural use lead to an overall ban on their use, Kreutzweiser said foresters will be left with fewer options for forest pest management.

“That’s why we need to be careful about how all these things are addressed and articulated, and how they are ruled out,” he said. “Because I do believe it’s context-specific and we need to consider the alternatives.”

He advises carefully and extensively testing pest control products, and conducting the right tests to detect the level of risk before putting a product into use.