Jim Boniferro has taken his share of hits since acquiring a former Domtar hardwood sawmill in Sault Ste. Marie six years ago. While other North American operations have closed shop, his Boniferro Mill Works on People’s Road has been a survivor.
Nov 5, 2009 6:00 PM By: Ian Ross 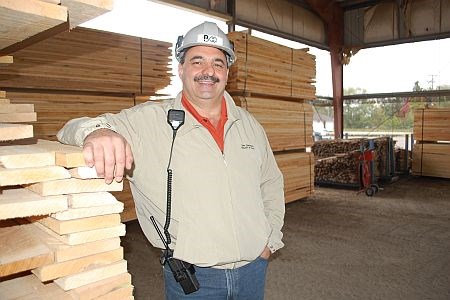 Jim Boniferro has taken his share of hits since acquiring a former Domtar hardwood sawmill in Sault Ste. Marie six years ago.

While other North American operations have closed shop, his Boniferro Mill Works on People’s Road has been a survivor.

Hardwood markets remain tough, but with so many industry casualties, Boniferro said the supply and demand for lumber is about even. He’s even benefitting from a few new American customers who sourced from other mills that shut down.

It’s been "ugly" in five of the six years Boniferro has run his 50-person operation. He has weathered cash flow problems, weak U.S. housing and home renovation markets, a strong Canadian dollar, and various wood supply and manufacturing challenges that periodically shuttered his shop and sunk others.

Boniferro saved the Sault mill in 2003 when Domtar announced it was closing the hardwood and veneer operation. As mill manager, he teamed up with industry colleague Tom Fox of Fox Lumber Sales in Montana to form a joint venture partnership.

"Our very first year was very good and it’s given us the strength to carry through the next five."

Almost all of the company’s maple and birch lumber is exported for furniture making, kitchen cabinets and flooring products in the U.S. This year is as much struggle as any other.

"(U.S. consumers) are not building or buying new homes and they’re not renovating old houses," said Boniferro, who began his forest career with Buchanan Lumber in Thunder Bay.

The latest challenge has come from auto parts makers who are shipping fewer components in wooden boxes, crates and pallets.

"We’ve had to expand our market base to farther geographic areas to move the volume of product we have," reaching customers in southern Illinois, Minnesota and Indiana.
Fortunately, his sawmill production for this year is expected to be near-capacity at a steady 11-million and 12-million board feet. And the only layoffs were during their regularly-scheduled spring four-week shutdown.

Two years ago, Boniferro’s company was dealing with an onerous provincial stumpage fee that was slowly bleeding the company white. He created a stir in industry circles and at the Ministry of Natural Resources when he legally challenged the legitimacy of the province’s Residual Value Charge (RVC), one of Ontario’s stumpage fees applied in its Crown Timber Pricing System. Boniferro's small company had paid more than $1.2 million for hardwood in the Algoma forest.

His problem with the charge wasn’t the fee itself, but the method used to calculate it. Boniferro won two rounds in court, then lost on the Ministry’s appeal.
He can’t say if his case woke up the Ministry of Natural Resources, since he reached a settlement with Ontario’s Attorney General. But it was an important issue to raise on "constitutional" grounds since the RVC was never passed in the Ontario Legislature.

He declined comment on the whole episode, preferring instead to have his say during this fall’s industry consultations toward making reforms to Ontario’s forest tenure and pricing system. The review will examine the method used to determine how Crown wood supplies are licensed, allocated and priced, as well as how companies access and pay for wood in management units.

"We’re very happy that they realized there was a need for this new process," said Boniferro. "Hopefully that it will address the concerns we’ve had in the past."

Boniferro said existing industry that employs hundreds of mill and woodland contractors must be assured of a stable source of supply while forest management units must also be opened up to new players to best optimize the resource.

However, he wants a mechanism in place that imposes a fair and reasonable time period on companies that close sawmills to either restructure and re-launch, or they must give up their cutting rights to other users.

"What’s the time frame that you tie up that fibre while other people say they have better ideas for utilization of it?"

He said there are 13-million cubic metres of Crown wood not being harvested but is still committed to companies not running mills. "It should be open and available to existing and new operations."

What may come out of this review is a public auction of some portion - not all - of the Crown fibre supply. "A small degree of fair market system could help assist with the value of the fibre and let newcomers have the opportunity to be in the marketplace," he said.

While all the forest industry buzz is about biomass, Boniferro said there must always be room for the primary manufacturer. "You still have to take the tree and make a product out of it first."

His sawmill generates sawdust, bark and wood chips that are shipped to companies like Flakeboard, Domtar and St. Marys Paper to make medium density fibreboard, paper products and as hog fuel for boilers.

Ontario’s biomass market is still in its infancy with many unanswered questions of reliability of supply, pricing and transportation costs. But Boniferro is staunchly against those forest stakeholders who regard fibre as only a source of ‘green’ fuel to be pelletized and incinerated in co-gen plants.

"The day we say we’re going to harvest our forests and burn it, to me that’s going backward in time," said Boniferro. "The greenest solution is take that tree and utilize the best piece of product you can get out of it."

The swirling wood grains in bird’s eye maple can be used for high-end furniture, he said.

As a lumber producer, Boniferro is limited in what value-added products he can manufacture since cash is always tight. Bankers regard his industry as "high risk" when it comes to getting access to credit and capital.

"When we first started our operation we were one per cent over prime on our line of credit and we’re more than four times that now."

Any upgrades made to the operation, like adding a new band saw, have been financed by money generated by operations.

The City of Sault Ste. Marie even helped out with a loan when Boniferro had to make $60,000 in repairs to his rail siding after CN Rail launched a national safety blitz that shut down his spur. The siding is a big part of his business that’s used as a reload centre by multiple companies.

Despite the company’s short history of struggle , Boniferro is encouraged by the fresh young blood in his workforce. Ten new people, some fresh out of Sault College have signed on as labourers and machine operators. That’s an encouraging sign with some older skilled tradespeople about to retire.

Boniferro is also awaiting word of the company’s FSC (Forest Stewardship Council) certification, an important value-added chip in itself. Clergue Forest Management Group, of which the company is a shareholder, is already certified, but the sawmill will shortly be able to offer a third-party environmentally friendly product from lumber to wood chips.