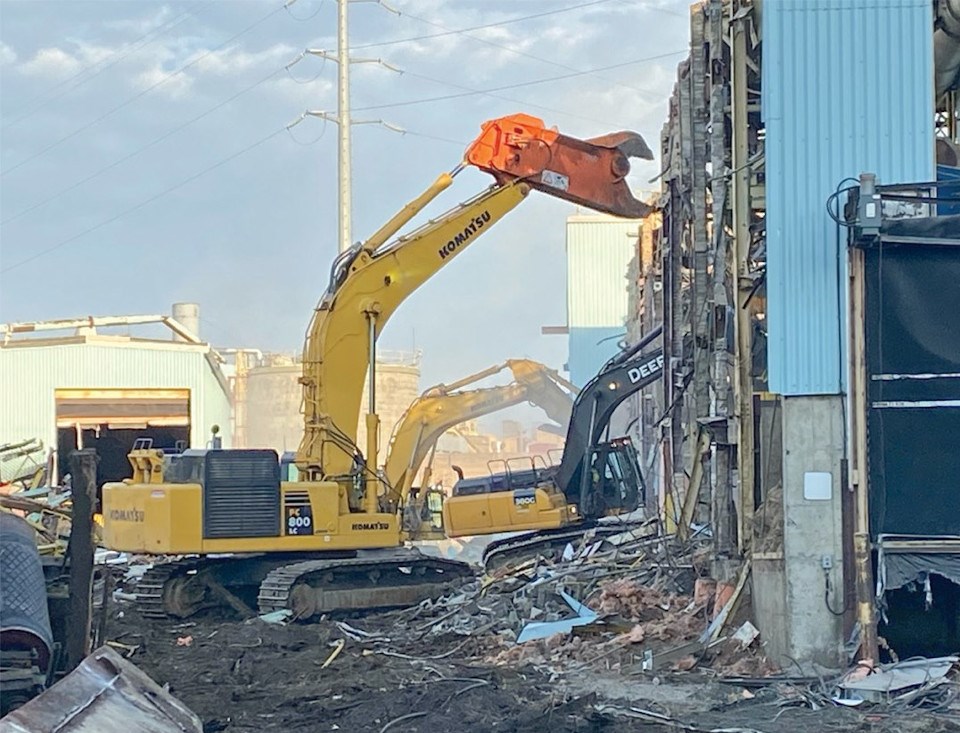 After more than 100 years spent looking out over the town of Fort Frances, the old mill is coming down. However, there's hope that new life will spring up in its place.

Last month, demolition began on the mill, now owned by a numbered company under Riversedge Development, with work on the teardown being handled by Canadian National Demolitions (CND).

Following the mill's sale from Resolute Forest Products to Riversedge in 2019, there was a 90-day period in which a qualified buyer could make an offer on the existing property.

No buyer was found during that period, but in August of this year the Aazhogan Renewal Partnership was formed between Riversedge and Rainy River First Nations in order to work together to develop some of the existing mill properties for new life in the future.

Still, there are parts of the mill that will not be around to see what comes next, and Riversedge asset manager Mitch LePage, along with CND president Jeff Norton, sat down with the Fort Frances Times in order to shed some light on what's currently taking place at the mill, out at the Fort Frances Airport, and what the future will look like - at least in the short term.

According to Norton, decommissioning work is being done on several existing mill properties, including the paper mill building itself.

“Permits have been issued for the paper mill building,” Norton confirmed.

LePage noted that even as permits have been issued for certain parts of the mill, the company is still working on exhausting any lead it has on parties who could be interested in remaining mill buildings, before moving on to the demolition phase.

“There's some items that we're still trying to market, like Biomass,” LePage said. “We're talking to various parties about its marketability and its future use, so that's not finalized as for its future. We're trying to market anything that we can for best end use, so whatever we can that makes sense, that is marketable, we want to provide to the market. Whatever then that does not fit that description has a different fate.”

While the possibility remains that a number of existing buildings could be purchased for repurposing, LePage and Norton expect the demolition process to take between 18 and 22 months, depending on factors like weather.

“One of the variables that's always hard in projects, and I've been involved in a lot of them, is weather,” LePage said. “Particularly in the north” Norton added. “Weather impacts, they're immeasurable, but they're practical,” LePage continued.

“They're likely to occur, although you don't necessarily put time in your schedule for inclement weather, it will show up somewhere in that slot and then you just have to manage accordingly based on what Mother Nature tells you. It could be heavy rains in the spring. It could be heavy snow in the winter. High gusts of wind and you can't dismantle the same way, you know, weather just impacts you differently depending on the situation it throws at you. And that's where experience comes in.”

Norton and his team at CND have that experience. While he was with a different company at the time, Norton was part of the demolition of the former Rainy Lake Hotel in downtown Fort Frances. He's also completed several other mill demolition projects over the course of his career.

Aside from the weather, Norton said he doesn't expect to run into any significant difficulties when it comes to the job ahead of him. “There are specialty areas, with the overhead galleries to be disconnected obviously, but we can manage through that,” he explained.

“All the chemicals, oils, etc. have been removed prior to my arrival. We are currently doing asbestos abatement ahead of demolition. That's an ongoing process. So asbestos abatement is really the only hazardous material that I have to manage, which we have a team for, and the team's here.”

Members of the public have likely noticed the team already, who are being housed in a temporary camp adjacent to the Fort Frances Airport in the town's north end. LePage and Norton both stressed that they are taking every precaution available to them in order to ensure that the workforce, primarily from out of town, act responsibly and keep any possible exposures to COVID to an absolute minimum.

“We do have COVID precautions in place,” Norton said.   “Every day the guys get their temperatures taken and a COVID check. [The camp] is actually another precaution, that we're in our own bubble or space. I don't want the guys going to restaurants every night, I don't want them going shopping every night. The camp is being catered by a local company. So they're feeding us, cleaning us. We basically have the space here [at the mill] and we've got that space there [at the camp]. I don't want to be the guy to bring COVID to this town.”

Norton said the camp is using local businesses to look after everything, from catering to cleaning and linens, in order to keep the workers isolated from the community, as well as to help support the local economy, a practice that extends to some of the work being done at the mill site.

“I've hired a couple of local service providers for equipment maintenance and repairs,” he explained.

“Also some general labour requirements. My fuel supply is all local, propane and diesel is all local, septic service up at the camp. I am supporting local. As far as local contractors, we're a demolition contractor, I need support on other stuff too. There are things where I'm gonna need to hire a specialty, like for cutting and capping services, to civil work that we're just not good at, stuff we don't do. They don't do demo, we don't do civil. It's as simple as that.”

“The best way to describe it is we're using local expertise where needed, when needed,” LePage said.

Once the demolition period has reached its conclusion, it's unclear at this point what the site will look like.

According to LePage, the grounds will meet an industrial standard level that is appropriate for how it is zoned, which would be different than the level needed if a commercial residential building were to eventually go up.

However, the future designations and plans and other requirements for the mill site are all things that LePage said Riversedge and the town, along with other stakeholders, are working towards together.

“We've formed a working committee with the Town of Fort Frances which includes their ECDEV, their chief building official and some members of our team and we're working collaboratively with them in trying to create a bit of a vision,” LePage explained.

“That in earnest has just begun, that work group. At this point in time we're working those [restoration, revitalization] angles and trying to understand that with the town. So we have to look at how a lot of things apply because the parcel as you see it, for it to become something different has to be subdivided in different end uses, from commercial to industrial to residential, perhaps, and current bylaws don't necessarily facilitate that process, so we're working very closely with the town to get ourselves there.”

For LePage though, the project is personal for how close to home it hits.

“The reason I am part of this project is because Smooth Rock Falls, where I grew up, didn't have this opportunity,” he said. “Smooth Rock Falls was a complete teardown with no revitalization opportunity and that's why I'm involved. I want to make sure that the Town of Fort Frances has a better outcome than Smooth Rock.”

Northern College wants to hear about your workforce needs
Nov 27, 2020 11:32 AM
Comments
We welcome your feedback and encourage you to share your thoughts. We ask that you be respectful of others and their points of view, refrain from personal attacks and stay on topic. To learn about our commenting policies and how we moderate, please read our Community Guidelines.