Could be the wrecking ball for Fort Frances mill 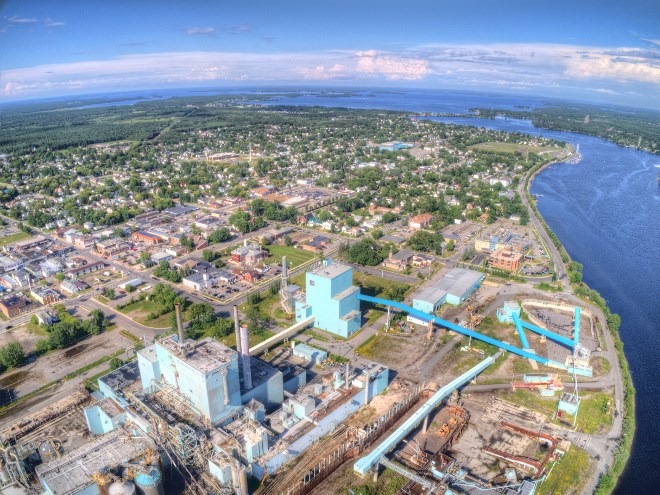 Resolute announced the closure of the Fort Frances pulp and paper mill in May 2013.

Resolute Forest Products is selling its closed Fort Frances mill to an undisclosed site redeveloper to demolish buildings on the property and repurpose it for other community uses.

“We anticipate the sale will finalize in the next couple months,” said Resolute spokesman Seth Kursman by email.

With negotiations for the former pulp and paper mill apparently broken off, Resolute maintains if someone wants to restore the property back to manufacturing status, they’ll have to take that up with the incoming site redeveloper.

The Town of Fort Frances’ preferred choice to revitalize the mill is Rainy River Packaging (formerly known as Repap), a private consortium of investors, experienced in forestry, with some connections to the mill.

“I expect the redeveloper and their potential partners will be meeting with (Fort Frances) officials and respective ministries over the coming weeks,” added Kursman.

“They will be making an official, public announcement as well. At this time, we’re bound by a NDA (non-disclosure agreement) so we cannot disclose.”

Back in January, Resolute signed a backstop agreement with a site redeveloper as part of a two-track sales process to invite bids for the shuttered mill, but also have a brownfield demolition and remediation company at the ready.

The deadline to receive bids was March 15.

Resolute said “several entities” participated in the process but only Rainy River Packaging submitted a bid, which the Montreal-based forest products company rejected this week.

Resolute insisted that any negotiations with prospective bidders had to be kept confidential.

Laflamme insisted they were accommodating to Rainy River but the bidders failed to produce an offer that gave them a “level of certainty.”

“They failed to provide the required financial deposit, did not mark up the asset purchase agreement, did not address our key requirement to perform environmental remediation, and did not produce sufficient, committed financing to move forward,” said Laflamme in his letter to Caul.

Resolute’s choice of a site redeveloper is being described as a “restorative development company,” experienced with decommissioning and remediating industrial brownfield properties across North America.

Their identity could be released by Resolute this spring or at a time of that company’s choosing.

A news release from Town of Fort Frances expressed disappointment that the Rainy River bid wasn’t considered, but they’re determined to restart the mill.

“We have met with Rainy River Packaging Inc. and (Energy, Northern Development and Mines Minister Greg) Rickford and will reach out to both the potential buyer and to Resolute to enter into discussions to continue our mission to broker a deal.

“The town is preparing for all eventualities for the future of the mill property, but continues to work toward an operational future for this key economic asset.”

Mayor June Caul responded that they’re prepared to go the political route to strike a deal.

“Maybe they will be willing to make a business deal if they’re allowed to depending what influence Resolute might have on them. We spoke to Minister Rickford and executive members of Rainy River Packaging to see what is next and to determine what the town’s next move might be.”

Fort Frances’ effort to restart the mill under new ownership and secure local wood rights has put them at odds with Resolute.

The situation could set up either a showdown between Queen’s Park and Resolute or a mediated settlement.

Cabinet minister Greg Rickford reiterated his earlier support for the community in an updated statement after learning of Resolute’s decision.

“I believe the paper mill is viable, and I know the community will continue to explore options that would see the mill open again. Our government has supported the opening of this mill, and I will continue to support finding a buyer that will bring jobs back to Fort Frances. And I still believe there is an opportunity to work with Rainy River Packaging (formerly Repap).”

A release last week from the Ministry of Natural Resources and Forestry indicated it’s willing to work with any company that needs Crown fibre to maintain and create forestry jobs.

“We are encouraged by the interest in the Fort Frances mill and look forward to working with any successful bidder."

Sudbury apparel-maker gaining acclaim for mask campaign
Sep 1, 2020 3:00 PM
Comments
We welcome your feedback and encourage you to share your thoughts. We ask that you be respectful of others and their points of view, refrain from personal attacks and stay on topic. To learn about our commenting policies and how we moderate, please read our Community Guidelines.