Ramsey Lake has attracted activity to Sudbury ’s core for decades. Now, with the construction of the Northern Water Sports Centre, the city is poised to boost its sports tourism industry even further. The $4.
0
Oct 29, 2013 2:47 PM By: Lindsay Kelly 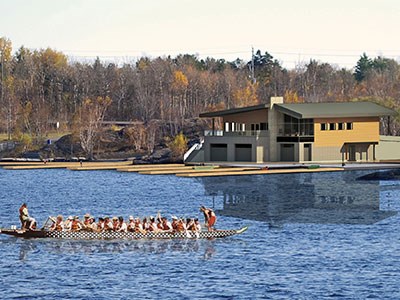 An artist’s rendering of the Northern Water Sports Centre in Sudbury shows what the facility will look like when it’s complete next spring. Designed by Yallowega Belanger Architects of Sudbury, the two- torey facility will support local water sports programming while helping to attract national and international sporting events.

Ramsey Lake has attracted activity to Sudbury’s core for decades. Now, with the construction of the Northern Water Sports Centre, the city is poised to boost its sports tourism industry even further.

The $4.6-million project, which has been in the planning for a decade, will improve access to programming for local athletes, but also open up opportunities to host national and international water sports events.

Funding was gleaned from a number of sources: the city provided $500,000, along with the land at Bell Grove; the Northern Ontario Heritage Fund Corp. provided $1 million; FedNor provided $1 million; $1 million was provided by Xstrata Nickel (now Sudbury Integrated Nickel Operations, a Glencore company); and the remaining $500,000 is being raised via a community fundraising campaign.

The centre is being designed by Sudbury firm Yallowega Belanger Architects.

Located just down from Science North, the centre comprises two buildings: the larger, 14,000- quarefoot building will have locker rooms, changerooms, washrooms and canoe club storage on the lower level.

The upper level will include a year-round training facility with a kitchen, meeting rooms and a large terrace.

The second, 5,000-square-foot building will be used as cold storage for the dragon boat equipment. When complete, the building and land will remain city-owned entities. The goal is for the facility to become self-sufficient so that it can be run as a year-round training facility.

The facility is being built, in part, to support programming in the community, for which there is a growing demand.

“Many people aren’t really aware of the breadth and depth of the community programs that are offered,” said project manager Sheila Mendes. “I think there’s been a perception that these clubs are somewhat elite and the numbers are small and the organization and facility are serving a small number of people, but the numbers are big, really big.”

Support for local programming translates into more tourism opportunities, and the centre’s international racecourse, along with its year-round training facilities and viewing area, make the venue ideal for events.

“In terms of a racecourse venue with a viewing area that runs parallel to the racecourse so that people can stand along the boardwalk and watch these events, that’s unparalleled in the country,” Mendes said. “So that’s one of the things that out-of-town competitors and their families who come to Sudbury for an event really enjoy. Bell Park is such a beautiful, beautiful venue from which to watch some of these events.”

The next closest comparable facility is the Welland International Flatwater Centre on the Welland Canal, Mendes said.

Mark Vainio, business development officer for the tourism and culture department at the City of Greater Sudbury, said building new infrastructure is not a key priority for the city, but it does help attract people.

“Obviously, bringing events to Sudbury is our thing, and obviously the better facilities you have, the better chance you have at getting these events,” Vainio said.

The city’s main focus is providing support to local sport groups looking to bring events into the city. Last fall, the city formed the Sports Tourism Advisory Panel to make recommendations on how to successfully develop its sports tourism industry. That recommendation came out of consultations with Blair McIntosh, CEO of Sport Alliance Ontario, after Sudbury hosted the Ontario Summer Games in 2010.

“Through the summer games we realized that there’s a lot of departments in the city,” Vainio said. “Some were willing to help out, some tried to help but couldn’t, and some were hard to communicate with. So that was one of the ways we decided we could bring all the groups together on an ongoing basis.”

The idea is to have an organizational structure in place so that if a big event is coming to town, the city can easily and quickly access the appropriate information to get planning started.

The council can also help weigh the economic development contribution of an event against the investment a group is making.

For example, a group may be offered a discount on facility rental fees if it’s predicted to generate a large economic impact, Vainio said.

Thomas Merritt, chair of the centre’s board of directors and coach for the local adaptive rowing program, said the centre is looking to collaborate with partners like Science North.

“Science North has been very up front that they’re happy to be a partner, as long as we can find a way to make it a real partnership, not just putting our names on each other’s material,” Merritt said. “We’ll find ways to share participants.”

That could mean offering a youth camp at the canoe club in the morning and having participants spend the afternoon at Science North.

He emphasized that the project is being designed to be enjoyed by Sudburians and visitors for the next several decades.

Construction on the Northern Water Sports Centre started in September and should be complete by the spring.