Sudbury’s Downtown Village Development Corporation (DVDC) is proposing a mixed-used development project that would meet multiple needs in the downtown, while kickstarting improvements to the core of the city.
0
Nov 2, 2015 6:19 PM By: Lindsay Kelly 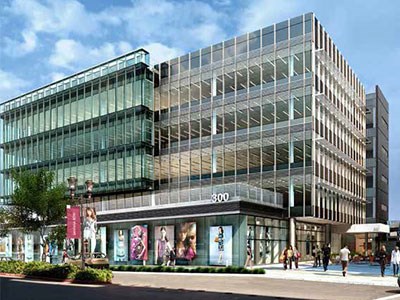 A rendering illustrates what a mixed-use development project could look like in Sudbury’s downtown core. The city’s Downtown Village Development Corporation is requesting the city offer incentives to developers to kickstart development in the city’s core.

Sudbury’s Downtown Village Development Corporation (DVDC) is proposing a mixed-used development project that would meet multiple needs in the downtown, while kickstarting improvements to the core of the city.

If the plan is approved by city council, the DVDC would solicit interest from private developers, with bonus points awarded to the proposal that includes a residential component.

But to sweeten the deal for would-be developers, the organization wants to see the city put in place incentives, such as interest-free loans, to ease the financial burden associated with development projects.

DVDC manager Susan Thompson cited a recent example of a Sudbury-based developer who undertook a $12-million residential building project in Hamilton because the city offered up a $5-million, five-year interest-free loan under its financial incentive program. The project, now complete, is 61 per cent leased.

“We have to make these projects viable and appealing to the private sector, and they’re not right now; they’re very break-even,” Thompson said. “We see there’s a role for the city to play in getting these projects off the ground, and we’re in the process of negotiating what that would actually end up being.”

Some incentives are offered under the city’s Community Improvement Plan, which was amended recently to expand the downtown area. But restrictive language prevents the incentives from being used for residential, structured parking, or multi-use mixed projects like the kind the DVDC is proposing.

Although the Master Plan calls for three structured parking facilities, Thompson said the DVDC envisions the projects being smaller in scale and including commercial and residential components, so that more of a balance is brought to the downtown, and the building itself will be more aesthetically pleasing than a staid, multi-level parking structure.

“This project, we think, is important, because not only does it create private-sector investment, but it’s meeting some critical needs downtown, which are the need for residential and the need for more parking, and it’s starting to fill in all the empty parking sites that are just flat right now,” Thompson said. “So it’s infilling in a positive way.”

Thompson said a $200,000 surplus from parking revenues — the DVDC used past budget numbers to reach the figure — could be a potential source of funding for any incentives the city might offer.

If more developers can be enticed to invest in the downtown, the city’s whole tax base increases and revenues can be spent across the city, she added.

To date, the DVDC has formed a committee comprised of local stakeholders and is now waiting to put forward their proposal to council, which Thompson expects to take place this fall. The DVDC has already approached developers, representatives of the downtown business community, and senior levels in banking to explore their willingness to fund a project of this scope.

“The response has been unanimous,” Thompson said. “They’re saying this is where the downtown needs to go.”

If approved by council, the DVDC would build a business case around a presently empty downtown parking lot, for use in presenting to developers, and the group would start moving the project ahead in the spring of 2016.