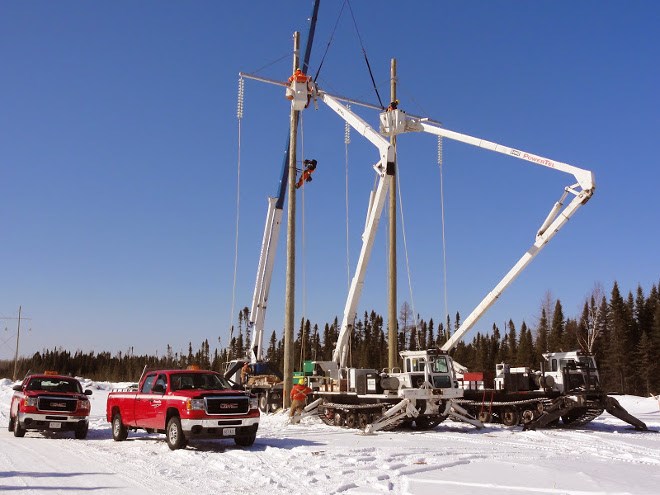 Wataynikaneyap (Watay) Power has selected PowerTel Utilities Contractors of Sudbury to build the first leg of an “unprecedented” transmission line project to plug remote First Nation communities into the provincial grid for the first time.

The First Nation transmission company announced that PowerTel will build the 117-kilometre Pikangikum Power Line Project, which will connect that community to grid power at Red Lake to the south.

Construction is now underway and is expected to be finished in late 2018.

This line will be used to connect other communities in the remote North as the network expands.

The Pikangikum line is the first stage of the larger 1,800-kilometre Wataynikaneyap Power Transmission Project to connect 17 First Nations to grid power.

Ottawa earmarked $60 million for the project.

In 2013, PowerTel worked with AECOM and Deutschebank to begin developmental work on the transmission line.

"PowerTel will work closely with the local First Nations communities, Wataynikaneyap Power and Northern Ontario skilled resources to deliver this important project on time and on budget."

The project is a joint venture between Watay (51 per cent) and Fortis, a Newfoundland utility company.

Wataynikaneyap Power is a licensed transmission partnership owned by 22 First Nation communities in the northwest.

Pikangikum is one of many First Nation communities in the northwest that’s dependent on expensive diesel fuel generation in the community to provide power.

A Watay news release said the community’s diesel generating station has been operating at capacity since 2010.

Like many off-grid communities, Pikangikum has experienced frequent equipment failures and the power outages have impacted education and health services in the community, access to safe drinking water, and the ability to build critical infrastructure. Eighty per cent of the homes are without water and sewer connections.

"There is a silent excitement in Pikangikum and we need to move forward to honour our commitment to the community of Pikangikum that we will get them connected to a reliable power source," said Watay Power CEO Margaret Kenequanash in a Nov. 30 news release.

"I'm very excited, especially seeing the training that has started in Pikangikum, but I'm particularly happy with the work we did with the community elders and leadership to get to this point."

Scott Hawkes, president-CEO of FortisOntario and its subsidiary, Wataynikaneyap Power PM, called the selection of PowerTel a “major step forward” for the project.

“As project manager, we are pleased for the Pikangikum First Nation community, as the project now enters into the construction phase. We look forward to working with PowerTel."