Bidding on construction projects, Jamie Saulnier found it difficult to engage the First Nations communities in which he was working.
Oct 29, 2013 2:42 PM By: Lindsay Kelly 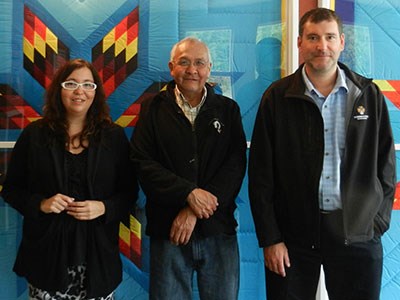 Bidding on construction projects, Jamie Saulnier found it difficult to engage the First Nations communities in which he was working.

He wanted to hire First Nations residents to work for him, but with little information available about the communities, it was hard to know how to start.

Over the last six years, Saulnier has been devising a solution.

Working through his Manitoba company, Running Deer Resources, Saulnier has created a strategy that takes a proactive approach for First Nations to engage industry. Now complete, the strategy invites industry to the community to learn about the people, take stock of its assets and engage in meaningful collaboration on development projects that results in employment for local residents.

“We’re trying to shine a light on the community itself to showcase everything that it has,” Saulnier said. “From that, industry players that are interested in working with the community, whether it’s business or whether it’s trying to find employees, can work directly with that community to do that.”

Collaborating with Migisi Sahgaigan (Eagle Lake) First Nation, near Dryden, Running Deer has created the Community Resource Information System (CRIS), which catalogues all workers in the community, their skills, and work eligibility. Its sister database, the Community Assets Inventory Program (CAIP), inventories the community’s assets, such as equipment and industry related businesses.

Companies wanting to engage with Eagle Lake can register with the CRIS website, fill out the required forms, and from there, get contact information, view resumes and post job vacancies.

To handle this new service, Saulnier has since formed a subsidiary company. Running Deer Resources handles Aboriginal engagement exclusively now, while RDR Industrial Contractors deals with the construction arm of the company.

While he’s achieved what he set out to do six years ago, Saulnier is now looking beyond the borders of individual communities.

His next goal is to create a regional portal, into which all area First Nations would input their data.

It’s a positive collaboration for both sides, because it creates a true partnership, Saulnier said.

“As new communities come online, that’s going to now identify a whole new workforce and new set of businesses that are available,” he said. “Eventually, if we can have that throughout northwestern Ontario, the goal is that anybody that is looking to perform work in northwestern Ontario would then have the ability to log into the regional portal and locate communities and locate employees.”

There is a charge associated with Running Deer’s Aboriginal engagement services, and communities that sign up are issued a licensing agreement for the system. But Saulnier emphasizes he’s not in it to make money.

“We want to make this as easy as we possibly can for both parties,” he said.

He acknowledges not all communities have the resources to pay for this kind of strategy, and that’s why he’s taking his case to the next level.

In October, Saulnier presented his idea at the national chiefs assembly in Lac Seul First Nation, and he’s hoping to get an audience with federal Aboriginal Affairs Minister Bernard Valcourt at a future date.

If this initiative gets federal support, Saulnier believes the initiative can become an affordable, viable option for all First Nations.

“I’ve reached the end of the road—somewhat,” Saulnier said. “We’ve stopped building and we’ve accomplished what we set out to do so long ago. From here, it’s to water that seed that we’ve planted.”