Thomas McKenzie had worked in construction across Canada for 20 years, but without certificates to verify his safety training, it was difficult to get jobs. That’s where the new line crew ground support program came in.
0
Jan 13, 2014 3:52 PM By: Lindsay Kelly 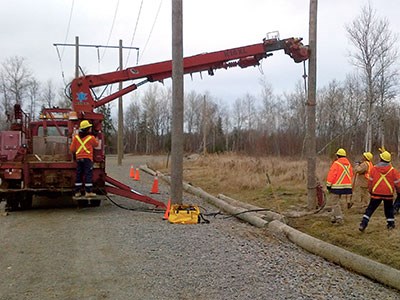 Training as ground support for the powerline industry required students to learn the elements of the powerline technician program, including climbing the poles. The training, delivered through Gezhtoojig Employment and Training and Infrastructure Health & Safety Association, prepares participants for entry-level jobs and apprenticeships in industry.

Thomas McKenzie had worked in construction across Canada for 20 years, but without certificates to verify his safety training, it was difficult to get jobs.

A new pilot program two years in its design, it trains Aboriginal participants in the elements of ground support for powerline technicians, readying them for entry-level positions in the powerline industry and positioning them to continue in apprenticeships.

Over 15 weeks, McKenzie and 11 other First Nations participants from around the North completed 21 safety modules in everything from hoisting and rigging to pole installation to electrical safety.

The program now gives McKenzie the safety background required to continue in the industry, upping his experience and knowledge, along with his marketability as an employee who’s ready to work. He had a job interview even before graduation.

“I’m more confident in myself, in my work skills,” said McKenzie, who hails from Temagami First Nation. “It was great to meet 11 other guys and work with them, and to be in school with my nephew.” The program was designed by Gezhtoojig Employment and Training in Sudbury, and delivered by the Infrastructure Health & Safety Association (IHSA). The two collaborated with industry partners like PowerTel, along with Cambrian College, which provided its powerline field and classroom space for delivery of the program.

Cambrian has delivered the powerline technician program since 2005, a program Ron Sarazin, Gezhtoojig’s special projects coordinator, calls the best of its kind in the province.

The college has to cut off applications at 300 and only takes 24 students in each of its spring and fall intakes, but Sarazin, who sits on the program’s advisory committee, noticed a dearth of Aboriginal applicants.

“I think if we had one Aboriginal apply, we were lucky,” he said.

But many of the ongoing powerline projects were taking place in First Nations communities across the province, and there was a need for ground support. He decided to see if he could design a program that met industry needs while providing opportunities for training and work for Aboriginal workers.

Employees find well-paying jobs, while employers get skilled workers and save on the cost of training, which typically runs between $10,000 and $12,000 per employee.

“When they go out with a resume, it’s quite enhanced now; this is what an employer would put these individuals through once they’re hired—at a cost to the employer,” Williamson said. “These guys are now ready to go to work. So, not only do they have the skills to assist with powerline, or enter into an apprenticeship for powerline, but these skills, this training is now transferrable across other sectors that we serve.”

The IHSA has 108,000 members in Ontario and more than 600,000 employees who could potentially hire these new workers, Williamson said.

An added bonus is that participants have a new sense of confidence and pride in their work. Some were relying on social assistance, were out of work, or had no direction for their futures. The change in attitude and work ethic is remarkable, Sarazin said.

This first cohort was a pilot project, but it was so successful Sarazin wants to keep it going. He’s applying to the province for funding for two more years, which would allow for four more 15-week sessions.

The benefits are tangible: the Canadian Union of Skilled Workers has asked for all participants’ resumes, and one student was employed with electrical contractor Valard before graduation, starting at $25 an hour. Sarazin hopes to have all 12 graduates employed by February.

As one of its first graduates, McKenzie wants to see the program continue. Calling it a “great experience,” he plans to return to mentor the next group of students, because he can’t say enough good things about the experience. “I hope that it keeps going,” he said. “It’s great for confidence for young Native youth. I wish I would have been younger to be able to do this.”