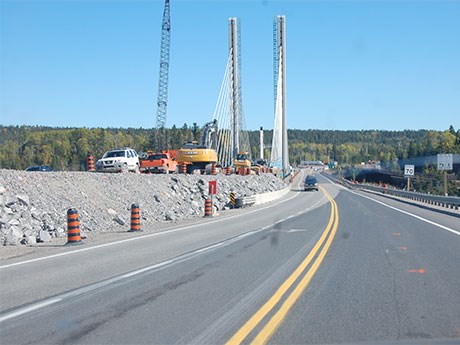 Nipigon Bridge under construction in September, 2015.

The province announced Nov. 23 that the Trans-Canada Highway span, east of Thunder Bay on Highway 11-17, is operating at full capacity.

The $106-million cable bridge failed 42 days after opening to traffic in January 2016.

An engineering report revealed that improperly tightened bolts snapped on a section of the bridge, causing the steel deck to raise 60 centimetres. Traffic was brought to a halt on the only highway connection to Western Canada.

One lane was opened the next day, followed by two lanes a month later while repairs were made.

The structure consists of three towers with cables supporting the bridge deck and a separate sidewalk for pedestrians.

“The Nipigon River Bridge is a critical link between Eastern and Western Canada,” said Energy, Northern Development and Mines Minister Greg Rickford in a statement. With the bridge open to all lanes, we are keeping Northern Ontario open for business.”

Preservation of heritage library a labour of love for archaeologist
Jan 19, 2021 3:30 PM